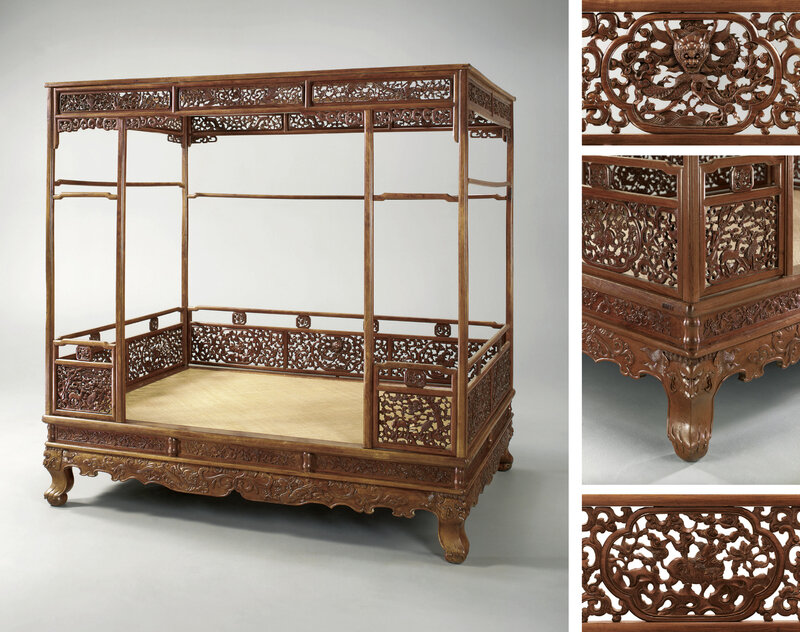 The bed with soft mat top set within the rectangular frame above a high recessed waist with short bamboo-form vertical struts, the panels in-between carved with bird-and-flower design, the beaded curvilinear apron elaborately carved in high relief with a pair of confronted chi dragons among the scrolls and clouds, supported on cabriole legs terminating in claw-and-ball feet embellished with animal masks at the shoulder; the canopy supported on six posts, four at the corners and two inset along the front, joined by a low railing of nine panels all carved in openwork, the two front panels with deer, crane and pine trees, the side and the back panels similarly carved with qilin and lions reserved on a formalized chi dragon ground, the central back panel depicting a powerful upwardly coiled four-clawed dragon, inset above the panels with a series of openwork dragon roundels, the narrow frieze below the canopy similarly carved with phoenix and dragons.

Note: Canopy beds have either six or four posts. It was a common practice to use the drapery to create a private world within the closed curtain, and examples can be seen in Ming and Qing woodblock prints. The current example is typically ornately carved with symbols of longevity and fecundity such as phoenix and peonies. Other closely related canopy beds include the one formerly in the collection of the Museum of Classical Chinese Furniture sold at Christie's New York, 19 September 1996, lot 62, one in the Palace Museum in Beijing, illustrated in Furniture of the Ming and Qing Dynasties (I): The Complete Collection of Treasures of the Palace Museum, Beijing, 2002, pp. 2-3, and another in the Great Mosque in Xi'an, bearing common design and construction features. The present bed with high waist has a powerful silhouette enhanced by the sturdy cabriole legs carved with animal masks and clawed feet, as well as the carving on the railing at the back and sides with series of medallions.

The main dragon on the railing of the present lot has four talons, which according to the Qing period sumptuary regulation, were permitted for use as insignia for princes and nobles of third and fourth ranks, suggesting an imperial association.