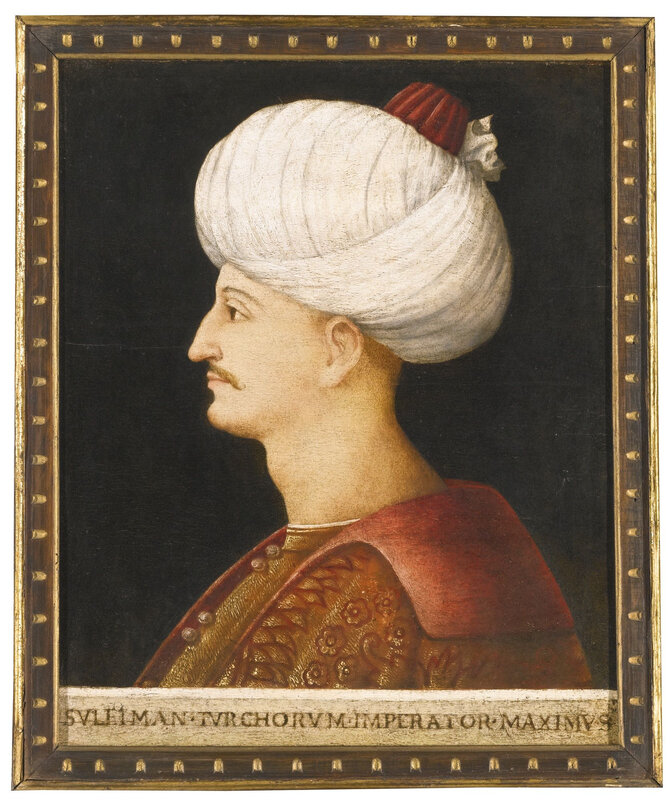 Note: When he came to power in 1520, Suleyman II inherited a vast empire which encompassed Syria, Palestine, Egypt and the Hijaz, including Mecca and Medina; extending eastwards towards the Caspian Sea, as far North as Vienna and parts of the African coast to the South. As the tenth ruler of the House of Osman, Suleyman quickly became known locally as “Kanuni” ('the Lawgiver'), due to his important legal reformations (E. Atil., The Age of Sultan Suleyman the Magnificent, 1987, p.18). Also known in Europe as “Sultan Suleyman the Magnificent” due to his prodigious administrative restructuring and keen artistic patronage, Sultan Suleyman was responsible for turning Constantinople (now Istanbul) into an important intellectual centre.

Furthermore, his military conquests and the terror engendered by Barbaros Hayreddin Pasha (Barbarossa) and his fleet in the Mediterranean provoked a fascination with the Sultan and his important Empire. Unlike his great grandfather, Mehmed II, who actually invited European artists to his court to paint depictions of him to be sent out as diplomatic gifts, Suleyman does not seem to have commissioned any portraits. Details of his physical appearance were conveyed to European artists through sketches created by artists who had accompanied foreign embassies to the Ottoman court.

Scholarly debate has come to the conclusion that these two depictions were probably copied after a “lost model” created just after Sultan Suleyman’s accession to the throne in 1520 (A. Orbay, The Sultan's Portrait: Picturing the House of Osman, Istanbul, 2000, pp.98-99). The present portrait bears striking similarities to both illustrations and it is possible that it may even be the original 'lost' model from which such depictions of the Sultan stemmed. Resemblances in the shape of his turban, the large drooping collar of his robe, his aquiline nose, fine lips and gently protruding chin with a thin moustache and slight delineation of his adam’s apple point towards this connection. Such details are shared on a medal representing Suleyman and inscribed “Solyman – Imp – TVR” in the Heberden Coin Room, Ashmolean Museum, Oxford (See Orbay 2000, p.112).

This painting is also inscribed along the bottom frame “Turchorum Imperator Maximus” ('Great Turkish Emperor Suleyman'). This was to be the catchphrase used on further depictions of the Sultan, including in Durer’s drawing and A.A’s copper plate print. Whereas Durer’s drawing condenses it to ‘Suleyman Imperator’, A.A’s copper plate print reads ‘Suleyman Imperator T’ – the ‘T’ most probably standing for Turchorum as in the present painting. In addition, Durer and A.A. have both added the date 1526, which would have held strong symbolic connotations in the minds of a European audience as it was the date that marked the battle of Mohacs, during which forces of the Kingdom of Hungary led by King Louis II of Hungary and Bohemia were defeated by the Ottomans.

It is very likely that either Andrea Gritti (1455-1538) or his son Alvise Gritti (1480-1534) was the patron behind this portrait. Before being elected Doge of Venice in 1523, Andrea Gritti spent most of his life in Constantinople as a grain merchant and diplomat looking after Venetian interests. His son, Alvise Gritti was born from a non-Muslim Ottoman woman with whom Andrea had an affair, and played an important political role in the Ottoman state, advising both the Ottoman Sultan and European diplomats. A passionate patron of the arts, Alvise promoted architects and artists such as Jacopo Sansovino and Titian, who also drew a portrait of him. Titian eventually painted four known 'portraits' of Suleyman (see J.M. Rogers and R.M. Ward, Suleyman the Magnificent, exhib. cat. British Museum, London, 1998, p. 46 note 4 and H.E. Wethey, loc. cit.). Suleyman would have been far too grand to sit for the attendants of the ambassadors and other foreigners he received, which is why Alvise, who had artists around him and who received visits from the Sultan, may indeed be the patron behind this particular work.

In 1941, this painting entered the Contini Bonacossi collection, and notes accompanying the entry in the collection record the observations by leading historians of the time such as Longhi, Fiocco, Van Marle and Pope Hennessy. Whereas Longhi attributes it to Bellini himself, Fiocco describes it as a “school work but not too distant from the hand of the master himself”. Indeed, one can sense the artist’s subtle technique in the modelling of the face and clothing of the Sultan.

Both from a historical and art-historical point of view, the present portrait is a landmark. Not only is it one of the few Western images of an Eastern potentate done by a European artist, but it probably also served as a primary source of inspiration for many later portraits, drawings, prints and medals of Sultan Suleyman the Magnificent.

Commentaires sur A portrait of Suleyman the Magnificent, by a follower of Gentile Bellini, Italy, probably Venice, circa 1520