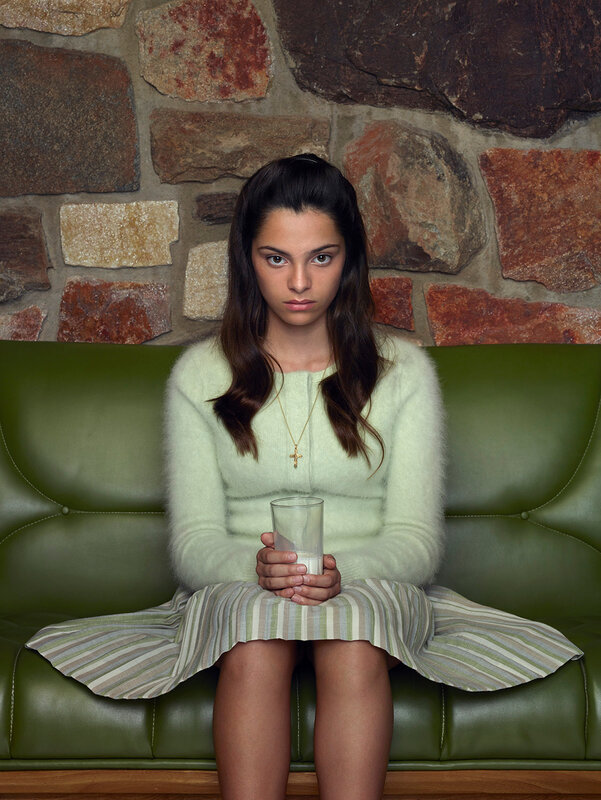 THE HAGUE.- Gemeentemuseum Den Haag and The Hague Museum of Photography are honouring one of the Netherlands’ most famous photographers, Erwin Olaf (b. 1959), with a double exhibition. Olaf, whose recent portraits of the royal family drew widespread admiration, will turn sixty this year – a good moment to stage a major retrospective. The Hague Museum of Photography will focus on Olaf’s love of his craft and his transition from analogue photojournalist to digital image-maker and storyteller. Olaf will himself bring together some twenty photographs by famous photographers of the past who have been a vital source of inspiration to him. Gemeentemuseum Den Haag will show non-commissioned work by Olaf from 2000 to his most recent series, including the work he produced in Shanghai and his most recent series Palm Springs, on display for the first time. Olaf will be showing his photography in the form of installations, in combination with film, sound and sculpture.

"What I want to show most of all is a perfect world with a crack in it. I want to make the picture seductive enough to draw people into the narrative, and then deal the blow. " - Erwin Olaf Journalistic training
Erwin Olaf was studying journalism in Utrecht in the 1980s when, having noticed that he was unhappy, one of his lecturers pressed a camera into his hands. ‘I loved the thing right from the word go,’ says Olaf, ‘the weight, the cool metal in my hand. It felt so natural. And when I took my first photographs, I knew I had found my calling.’ Olaf began taking journalistic photographs of theatre performances, worked for progressive magazines and volunteered for COC Nederland (which represents LGBTI interests). In his early work Olaf often depicted the human body quite graphically, breaching the restrictions on sexuality, the body and gender. He describes himself at that time as an angry adolescent, though his taboo-breaking work was highly significant in terms of visual freedom in the Netherlands.

Early work at The Hague Museum of Photography
The exhibition at The Hague Museum of Photography will start with his early work. Chessmen (1987-88) was one of Olaf’s first non-commissioned series, which came about when he was given the opportunity to produce a photobook. He had to fill 32 pages and he wanted to focus on the theme of power. He had heard an item on the radio about chess, a game of war consisting of 32 pieces. Olaf portrayed the game in a series of provocative images, featuring visible genitals, small half-naked people with kinky attributes, and extremely fat women in bondage outfits. The series did not go unnoticed. He received criticism for it, but also the Young European Photographers Prize. Skill
Another early series shows the engagement that has remained important throughout Olaf’s career. Blacks (1990) is based on a song by Janet Jackson with the line, ‘In complete darkness we are all the same. It is only our knowledge and wisdom that separates us’. The series reflects Olaf’s battle for equality, and also his technical skill. In these baroque portraits, literally everything is black as coal, yet Olaf managed to give the images a rich tonality, both with his camera and in the developing process. A self-taught photographer, he has shown himself to be a master, not only of old-fashioned darkroom processes, but also of new techniques that have emerged in rapid succession since the digital revolution. He did pioneering work with Photoshop in the famous series Royal Blood (2000). Thanks to this new technique, he is even better able to experiment to his heart’s delight in his staged photography.

Sources of inspiration
Besides his own work, at The Hague Museum of Photography Erwin Olaf will be bringing together some twenty photographs by photographers who are his most important sources of inspiration, ranging from a vintage still life with roses by the late nineteenth-century photographer Bernard Eilers to self-portraits by Robert Mapplethorpe and Rineke Dijkstra. The work of these photographers inspired him, made him look in a different way at his own artistic practice, or pushed his photography in a new direction. By showing these pictures alongside his early work, which is imbued with his love of his craft, Olaf will give visitors to the Museum of Photography an idea of what has shaped him as a photographer.

Gemeentemuseum Den Haag
The exhibition at the Gemeentemuseum will begin, even before the entrance to the galleries, with the life-sized installation Keyhole (2012). The exterior has two long walls with panelling above which framed photographs hang, as in a classic interior. But visitors can watch two films through the keyhole in the doors on either side of the installation. It will be immediately apparent that the Gemeentemuseum is highlighting a new development in the work of Erwin Olaf. Here, he is going one step further, presenting his photography in exciting combinations of film, sound and sculpture. 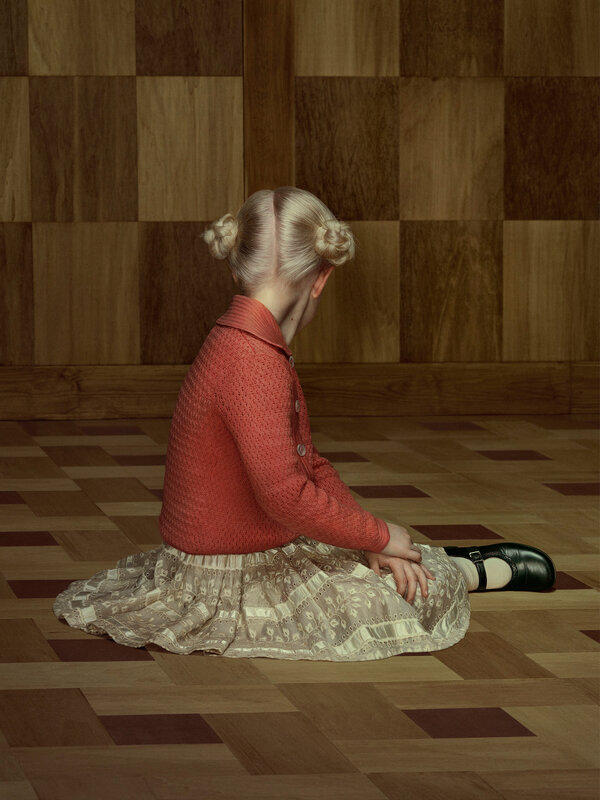 Social engagement
Erwin Olaf’s work has always been highly personal and socially engaged. The clearest influence on the development of his work has been the events surrounding 9/11. Since then, the bombastic, baroque staging of his previous work has made way for more vulnerability and serenity. This has produced images that are very popular with the public: highly stylised film scenes staged perfectly down to the smallest detail, often bathed in light as if they were paintings, with an uncomfortable underlying message. As in the series Rain (2004), which appears to capture the moment between action and reaction after a shocking event. The series Grief (2007), shot in a 1960s setting, is about the first moment of response, the first tear. Recent events are also reflected in Olaf’s work. He made the Tamed & Anger self-portraits (2015) in response to the Charlie Hebdo attack. In other works he addresses issues like the position of the individual in a globalising world, the exclusion and stereotyping of certain groups of people, and taboos associated with gender and nudity. The exhibition at the Gemeentemuseum will thus afford a glimpse inside Olaf’s turbulent and sometimes dark mind. A visit to the exhibition will be like wandering through his head.

Palm Springs: final part of a triptych
Erwin Olaf’s most recent series, Palm Springs (2018), will premiere at the exhibition in the Gemeentemuseum. It is part of a triptych about cities undergoing change, the other two parts being Berlin (2012) and Shanghai (2017). The Berlin series was produced in a period when dark clouds were gathering above Europe. It highlights Olaf’s concerns about freedom of expression and democracy, and the transfer of power from an older to a new generation. Shanghai is a hypermodern metropolis in China with a population of 24 million. The series made in this city explores what happens to the individual in an environment like this. In Palm Springs, Olaf again focuses on topical issues. One of the key themes is climate change, though at the same time the images also recall the America of the 1960s. In a beautiful series of portraits, landscapes – this was the first time Olaf had photographed landscapes – still lifes and filmic scenes he refers to issues like teenage pregnancy, discrimination, religious abuses and polarisation. The series tells the story of people withdrawing into gated communities as reality invades their paradise. Photographs of royal family
A very special addition to the double exhibition will be Erwin Olaf’s photographs of the Dutch royal family. As part of the exhibition at the Gemeentemuseum he will bring together many of the photographs that the Government Information Service commissioned him to take of the royal family. He also took the picture that the family used as a Christmas greeting last December. ‘I’m proud of the royal family,’ says Olaf, ‘because they are a binding factor in a democracy that is sometimes very divided. I’m happy to be able to contribute to that.’

Successful artist
The double exhibition will show how Erwin Olaf has developed from angry provocateur to one of the Netherland’s most famous and popular photographers. His work now features in the collections and exhibitions of museums the world over, including China, Russia, The United States of America and Brazil. In 2008 The Hague Museum of Photography showed his Rain, Hope, Grief and Fall series. In 2011 he won the prestigious Johannes Vermeer Prize, and in 2018 the Rijksmuseum purchased almost 500 photographs and videos by Erwin Olaf. Together, the exhibitions at the Gemeentemuseum and the Museum of Photography will constitute the biggest retrospective of Olaf’s work ever staged, spanning the period from the early 1980s to his most recent work. In the words of Erwin Olaf: celebrating 40 years of visual freedom.

The double exhibition has been curated by Wim van Sinderen with the assistance of Hanneke Mantel (both of Gemeentemuseum Den Haag and The Hague Museum of Photography), and has come about in close collaboration with Erwin Olaf and his studio.