The tall, pouch-shaped body tapers to a pinched neck and is applied with nine bosses below a rope-twist handle and cylindrical spout from which trail three slender straps. The flask is covered with a bright green glaze over a white slip falling short of the splayed foot to expose the pale buff ware.

Property from the Collection of James E. Breece III

Note: Vessels of this type were derived from nomadic leather pouches. A very similar flask is illustrated by R. Krahl in The Anthony de Rothschild Collection of Chinese Ceramics, The Eranda Foundation, vol. 1, 1996, pp. 50-51, no. 27, and another in the National Trust, Ascott Collection is illustrated by M. Medley, T'ang Pottery and Porcelain, London, 1981, p. 131, no. 125. The meiping is carved through the dark-brown glaze to the body with two foliate-shaped panels enclosing a peony blossom borne on a leafy branch, and separated by fish swimming in crashing waves.

Note: The technique used to decorate the present vase, which involved fully glazing the vessel and then cutting away or incising the design through the glaze before firing, was employed at several kilns producing Cizhou-style ceramics in Henan and Shanxi provinces. However, stonewares decorated using the same technique were also made at the kilns to the northwest of Ningxia Hui Autonomous Region. The highpoint of ceramic production in this region was under the Xi Xia or Western Xia (AD 1038-1227), a Tibetan-related people greatly influenced by Chinese culture who allied with the Liao to prevent Song incursion into the their territory. Despite numerous attacks by the Song armies, the Xia Xia remained undefeated until conquered by the invading Mongols in AD 1227.

Three meiping with similar designs of peony sprays in quatrefoil panels set against a ground of undulating waves are illustrated by Hang Tian in Xixia Ceramics, Beijing, 2010, p. 313, no. TB3001.

The bowl has widely flaring sides that rise from the small knife-cut foot to the slightly everted rim, and is covered allover with a lustrous black glaze finely streaked with 'hare's fur' markings thinning to russet brown at the rim. Of ovoid form with a wide neck, the body is decorated with groups of three narrowly spaced vertical ribs formed by trails of white slip and covered with a slightly mottled black glaze, that continues over the rounded mouth rim and thins to pale russet on the ribs and slip ribs that decorate the tapering strap handles. The lower body, interior, foot and base are covered with a thin glaze of caramel tone.

Note: Certain characteristics, such as the rolled lip, tall, tapering neck, striated handles, and thin caramel-colored glaze around the lower portion and inside of the vessel indicate an area of production in Henan or Hebei provinces. A closely related jar recovered from the kilns at Haobiji in Henan province is illustrated by Zhao Qingyun, Henan Taoci Shi, Beijing, 1993, pl. 27, no. 109. Of octagonal shape, the pillow is painted on top in dark brown on a white slip with two foliate sprays within linear borders. The side panels are decorated with abstract foliate sprays and trellis pattern, separated by bamboo-form corners, all under a clear glaze with combed details.

Note: This elongated octagonal form was a popular one among pillows from the Cizhou kilns. The Palace Museum, Beijing, has several Song dynasty Cizhou pillows of this shape decorated in a variety of styles. Some combine sgraffiato decoration with sancai-type glazing, for example the pillow illustrated in The Complete Collection of Treasures of the Palace Museum - 32 - Porcelains of the Song Dynasty (I), Hong Kong, 1996, p. 215, no. 194, and others with low relief panels, ibid., p. 214, no. 193. Another is decorated with an incised peony spray against a pearl-matting ground, ibid., p. 199, no. 180. These examples have no overhanging flange to the upper surface, as seen on the current example. However, the Palace Museum Collection also includes pillows of this form with an overhanging edge, decorated in dark brown slip on a pale ground, which bear the impressed mark of the Zhang Family workshop, ibid., pp. 171-3, nos. 155-6. Most significantly the Palace Museum has in its collection an elongated octagonal pillow, not only with overhanging edges, but also with vertical bamboo-style decorative appliques on the corners, similar to those on the current pillow. The Palace Museum pillow, illustrated ibid., p. 174, no. 157, is also decorated with a single peony spray similar to the pair of peony sprays on the upper surface of the current pillow.

A comparable single peony spray, painted in dark slip with details incised through to the white slip beneath, can be seen on a Cizhou truncated meiping in the Kyusei Kaone Art Museum, on a similar vase in the William Rockhill Nelson Gallery - Atkins Museum of Fine Arts, Kansas City, and on a fluted-mouth vase in the collection of the Buffalo Museum of Science, all illustrated by Yutaka Mino, Freedom of Clay and Brush through Seven Centuries in Northern China: Tz'u-chou Type Wares, 960-1600 A.D., Bloomington, Indiana, 1981, pp. 198-9, pl. 87; pp. 200-1, pl. 88; and pp. 204-5, pl. 90, respectively. Mino also illustrates a further Zhang Family-marked pillow of similar shape to the current example, with painted decoration of bird and bamboo, pp. 116-7, pl. 46.

The result of Oxford Authentication Ltd. thermoluminescence test no. P198a67 is consistent with the dating of this lot. Raised on three cabriole supports, the body and neck are decorated with two large peony sprigs carved and outlined with slip under turquoise and amber glazes on an aubergine ground, wood stand. Of square form with canted corners, the cover is painted in rich dark blue tones with two five-clawed dragons confronting a central shou character enclosed within a peach raised on a lingzhi fungus stem, all above a terrestrial diagram and within a double-line border. The sides of the cover are decorated with dragons amidst clouds and flames, and the rim with a narrow border of lingzhi scroll. The sides of the box are similarly decorated. 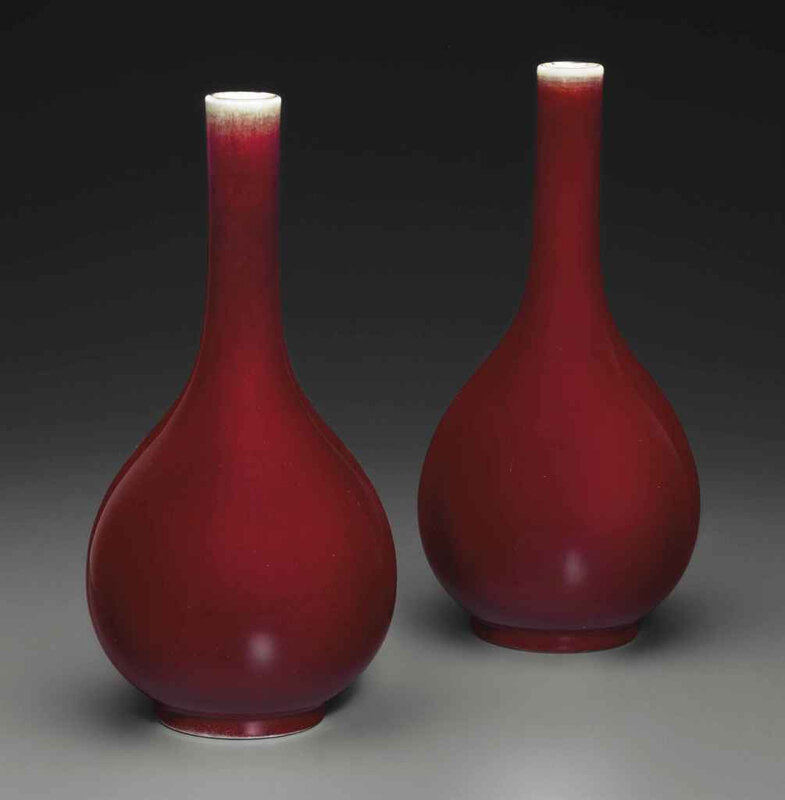 Each has a globular body that tapers elegantly to the tall, cylindrical neck, and is covered on the exterior with a glaze of rich, deep crushed-strawberry color that thins to pale celadon at the rim. The interior of the neck and base are covered in an ivory glaze suffused with crackle. The sides are subtly molded as six petals rising towards the conforming rim, and the bowl is covered inside and out with a blue-grey glaze suffused with dark grey ('iron wire') and gold ('golden thread') crackle. The bottom of the foot is covered with a brown dressing.

Note: A pair of similar bowls with Qianlong seal marks is illustrated in Selected Ceramics from the Collection of Mr. & Mrs. J. M. Hu, Shanghai, 1989, p. 110, no. 73. See, also, the pair of similar Qianlong-marked bowls from the collection of Stephen Junkunc, III, sold at Christie's New York, 19 March 2008, lot 646. The bulbous body is finely decorated with scholars engaged in leisurely pursuits in a lush garden setting. The tall neck is decorated with a repeating design of tulips separated by an encircling bulbous collar. The brush pot is delicately painted with a river landscape showing a scholar approaching a bridge, while another scholar is seated in a small building nearby.

Note: A Guangxu-marked blue and white brush pot similarly decorated in a painterly manner, but with a scene of waterfowl amidst reeds, formerly in the collection of Dr. Cheng Te K'un, is illustrated in the exhibition catalogue, Qing Mark and Period Blue and White, S. Marchant & Son, London, 11-22 June 1984, no. 47.