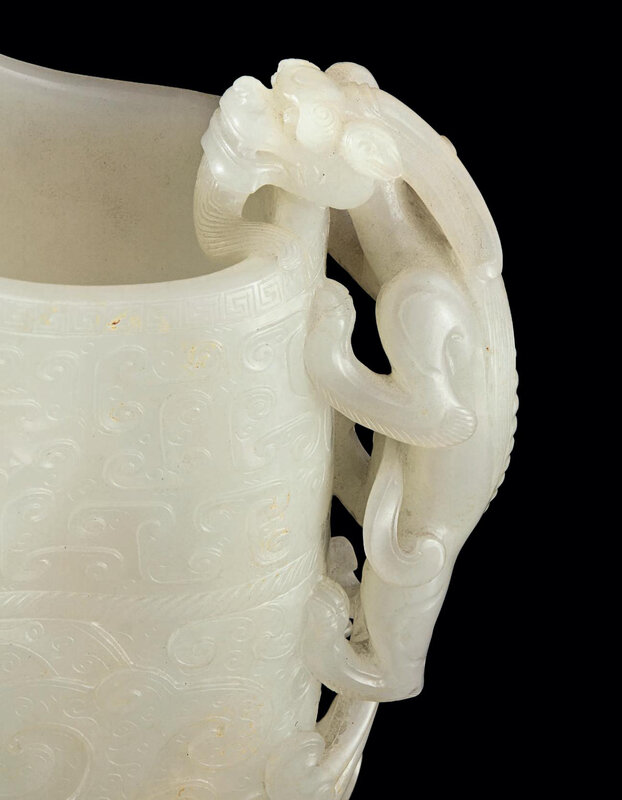 The lower body carved in relief around the sides with a sweeping, abstract design of a finely detailed, winged dragon, its head forming the base, all below a narrow rope-twist border separating it from a field of small detached scrolls on the upper body, with a narrow key-fret band encircling the shaped rim, the handle formed by a bearded dragon with single horn and long mane crawling up one narrow side to the rim, the semi-translucent stone of even color, hongmu stand.

Note: Archaistic jade rhytons of this type have their antecedents in jade rhytons of Han-dynasty date, such as the example from the Han-dynasty tomb of the King of Nanyue, illustrated by Jessica Rawson in Chinese Jade from the Neolithic to the Qing, British Museum, 1995, p. 70, fig. 61. That vessel (18.4 cm. high), which was inspired by a Western Asian form, is in the shape of a horn that rises from a twisted, bifurcated tail-form handle at the bottom and is incised around the sides with scroll decoration. By the Song and Ming dynasties and into the Qing dynasty, this shape was modified and the sides were carved with bands of decoration inspired by that found on bronzes and jades of the Eastern Zhou and Han dynasties, often with the addition of chilong carved in high relief around the sides, and sometimes with a dragon-form handle, as on the present rhyton.

This type of later, archaistic rhyton is exemplified by a dark green jade example of mid-Qing date in the Palace Museum, Beijing, illustrated by Yang Boda, ed., Chinese Jades Throughout the Ages - Connoisseurship of Chinese Jades, vol. 11, Qing Dynasty, 1996, pl. 38, that has a similar shape and very similar archaistic decoration on the body, but does not have a dragon-form handle. Like the Palace Museum example, two other jade rhytons of the same shape and with the same decoration as the present rhyton, but also without a handle, have been published. One is a pale grey jade rhyton in the collection of Mr. H. T. Hodgson which was included in the Oriental Ceramic Society exhibition, Chinese jade throughout the ages, London, 1975, no. 447, where it is dated Qianlong period, and where it is noted that it is incised below the rim on the interior with a eulogistic poem with a date corresponding to 1792. The other is a white jade example illustrated by Giuseppe Eskenazi in A Dealer's Hand: The Chinese Art World Through the Eyes of Giuseppe Eskenazi, London, 2012, p. 235, pl. 151. A white jade rhyton, also from the Palace Museum, Beijing, illustrated by Yang Boda, ibid., pl. 40, which has a similar shape, but different archaistic decoration on the body, does have a dragon-form handle, but of a chi dragon rather than the long dragon of the present rhyton. See, also, the white jade example with similar decoration on the body and a similar dragon handle, sold at Christie's, New York, 17 March 2017, lot 1081, which also has the head of a makara or dragon decorating the bottom of the vessel.