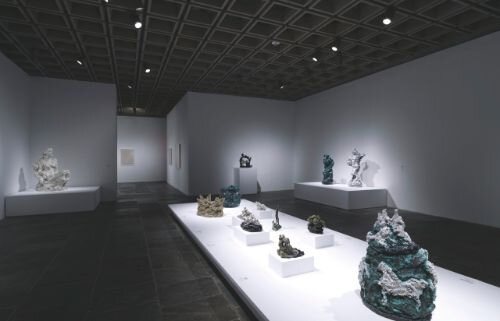 Note:  The lavishly sculpted Il Guerriero (The Warrior) constitutes one of the finest examples of Lucio Fontana’s celebrated ceramic oeuvre. The artist produced his first statue of a warrior in 1948 but returned to the subject again a year later creating compositionally different and larger versions of the figure. From the existing six works depicting Il Guerriero, the present statue displays the finest level of expressive detail in the beautifully modelled silhouette of a man. Over a meter tall, the imposing figure of the warrior appears at first glance to have briefly stopped to rest. However, rather than being static, the sculpture creates the impression of movement as the warrior’s garments seem to quiver in the wind while the hand holding the shield prepares for the soldier’s next step. The pulsating pinks and greens of the helmet amplify the dynamism of the sculpture, allowing Il Guerriero to reshape the space over which he presides with the power of plastic mobility.

Being above all a sculptor, Fontana began his artistic career making funerary busts at his family’s business. In order to continue his artistic development, he enrolled at the Accademia di Belle Arti di Brera to study neo-Classical sculpture. The artist began to experiment with styles and techniques beyond the Accademia’s formalist curriculum during his second year. As Fontana recalled in an interview some years later: “I took a great lump of plaster, gave it the rough shape of a seated man and then threw tar over it. Just like that, as a violent reaction” (Lucio Fontana cited in: Jole De Sanna, Lucio Fontana: Materia Spazio Concetto, Milan 1993, p. 10). Thus, rejecting traditional sculptural materials such as marble or bronze, Fontana found an expressive capacity in plaster and wet clay. He further discovered the full potential of ceramics when he moved to the small city of Albisola in 1935 to study with the futurist ceramicist Tullio Mazzotti.

Fontana continued to work with ceramics throughout the War while living in Argentina but committed to the material with renewed energy upon his return to Italy in the spring of 1947. Importantly, the artist chose to show two ceramic sculptures at the Venice Biennale of 1948 as well as at the seminal exhibition, Twentieth Century Art, held at the Museum of Modern Art in New York a year later. Recognised for their importance in Fontana’s unremitting exploration of space, his pivotal ceramic works, such as Woman with Flowers (1948) and the present Il Guerriero (1949), were also exhibited at Fontana’s retrospective at the Musée d'Art Moderne de la Ville de Paris in 2014.

In the history of twentieth-century art, Fontana’s output marks a fundamental conceptual development in the understanding of space. Only three years before the creation of the present figure, Fontana published his first Manifesto Blanco in Buenos Aires. The text primarily announced the need for a synthesis of space, time, colour, sound and movement by recalling the spatiality achieved by Baroque art and the dynamism exalted by the Futurists as a characteristic of modern life. Interpreted spatially rather than stylistically in terms of formal compositional dynamism, the Baroque inspiration present in Fontana’s sculptures fascinated famous architects of the day such as Gio Ponti. His daughter, Lisa, remarked: “Fontana is now considered Baroque; he is partly Baroque because this is the very nature of ceramic, which is essentially the Baroque of sculpture, and partly because of the temptation to embellish, which is intrinsic to the handling of a material that can express so many values” (Lisa Ponti cited in: ‘Prima astratto, poi barocco, ora spaziale’, Domus, No. 229, Vol. IV, Milan 1948, p. 36). Although it is Fontana’s tagli paintings that are predominantly associated with the artist’s Spatialism, his ceramic sculptures are considered to be some of the first works in which Fontana experimented with a new understanding of space. Thus, through a dazzling Baroque play of light and shadow, Il Guerriero stands at the apogee of the artist’s achievements in sculpture as a grand, early exploration of Fontana’s Spatialism.