Works from Frank Stella's personal collection to be offered at Christie's

Works from Frank Stella's personal collection to be offered at Christie's 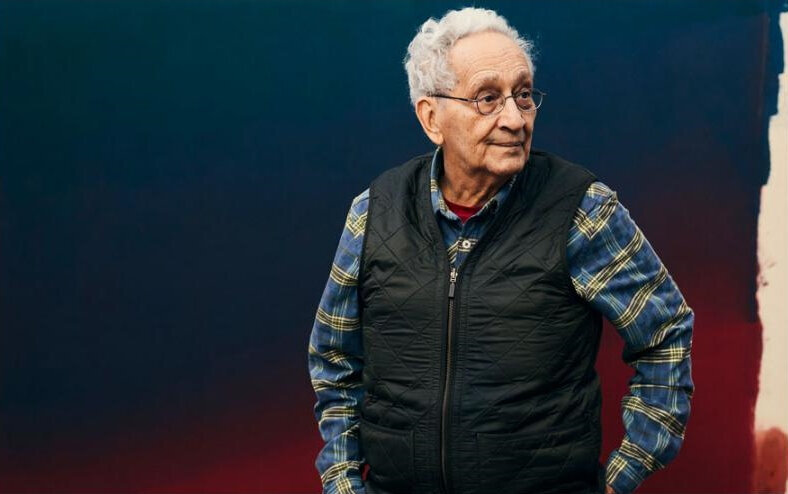 Barrett White, Executive Deputy Chairman, Post-War and Contemporary Art, New York, remarked: “Frank Stella is unequivocally one of the great artists of our time. He is an artistic polymath—an expert on Renaissance Art, a teacher of architecture, a trailblazing painter, a brilliant printmaker and an innovative sculptor. The selection that we present here illustrates one of Stella’s lesser known facets: his passion as a collector. Continuum: Select Works from Frank Stella’s Personal Collection is a group of works that have influenced Stella’s life and creative process. They are personal relics from his private life—gifts from artists and a major acquisition made as a celebration of his son’s birth—as well as landmark examples by Stella himself. What sets this selection apart is its expansive range, stretching across artistic movements and more than half of a millennium, from Northern Renaissance portraiture, to Surrealism, and on to the work of his peers, this group goes to show how the course of art history has informed Stella’s revolutionary practice over the course of his career.”

Stella remains a voracious student whose interests span many different periods and movements. From the work of the Old Masters, including painter Jan Sanders van Hemessen, the Surrealism of Joan Miró, the early works of David Hockney, to the paintings of peers such as Helen Frankenthaler, he has specifically sought out works by artists that excite and inspire him, acquiring many examples for his own personal collection. Beginning with his iconic Black Paintings in the late 1950s, and followed by his bold geometric canvases of the late 1960s and early 19790s, Stella challenged the accepted traditions of art history, including how to deal with the inherent contradictions of two-dimensional painting. But his work has always been rooted in a deep knowledge and appreciation of what had gone before him. His combination of scholarship and artistic ability produced a dialogue that would come to define postwar art history and secure Frank Stella’s place as one of the most influential artists of his generation.

THE ART OF THE SURREAL | LONDON | 27 FEBRUARY 2019
Joan Miro’s Peinture, 1927 (estimate: £1.2-1.8 million/ $1.6-2.4 million) is one of the final and most experimental works of Joan Miró’s radical and much celebrated series of ‘oneiric’ or ‘dream’ paintings, which the artist began in Paris in 1925 at the height of his involvement with Surrealism. Among the most radical works of Miró’s career, these paintings saw the artist create a magical universe of signs, line and color that would define his life’s work. Seeking to liberate painting from convention, and eliminate references to the external world, these radically simplified paintings, ‘receptacles for dreams’, saw Miró channel a subconscious, interior world onto his canvases. Purely abstract, works such as Peinture saw Miró go beyond painting to create a new form of art entirely freed from reality and representation. Revealing a new type of pictorial space, and evoking the void, these groundbreaking works paved the way for generations of artists that followed. 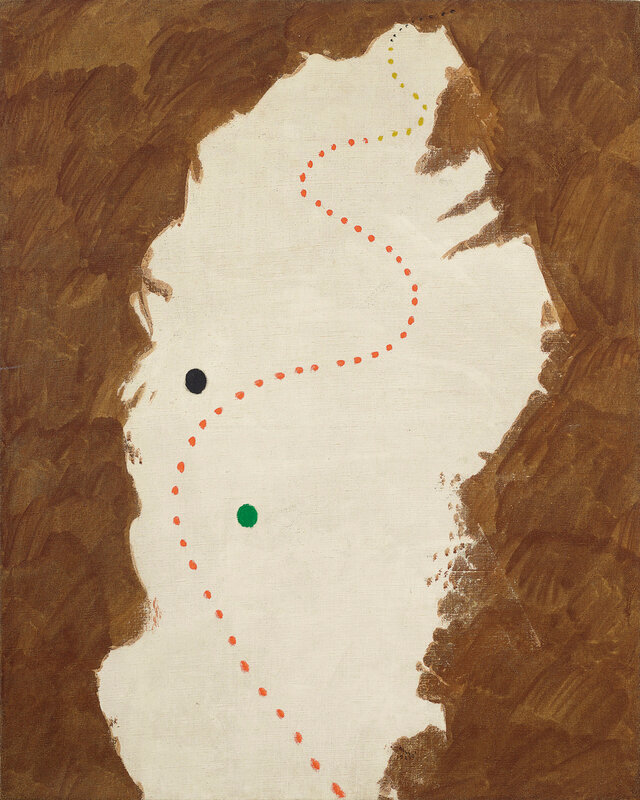 POST-WAR AND CONTEMPORARY ART EVENING SALE | LONDON | 6 MARCH 2019
Held in Stella’s collection for over five decades, A Realistic Still Life, 1965 (£1.5-2 million/ $1.9-2.4 million) is one of an important group of works by David Hockney that were shown in his acclaimed second solo exhibition ‘Pictures with Frames and Still Life Pictures’ at Kasmin Gallery, London. It was widely exhibited, including in Hockney’s major retrospective of 1988-89, which opened at the County Museum, Los Angeles, before travelling to the Metropolitan Museum of Art, New York, and Tate, London. A Realistic Still Life is one of several ‘still lifes’ that Hockney created in playful response to the work of American Abstractionists, while also parodying Paul Cézanne’s influential dictum to ‘treat nature in terms of the cylinder, the sphere, and the cone’. In a tongue-in-cheek dialogue with both his contemporaries and the masters of the past, Hockney offers a bold riposte to the received wisdom of Modernist painting and signals the singularity of his own work among the currents of his time.

Stella himself had famously situated paintings as objects, rather than depictions of illusory space, with his 1964 statement that ‘What you see is what you see’. In the keen, self-conscious intelligence of Hockney’s A Realistic Still Life, he clearly saw a kindred spirit. Hockney – who would later pay tribute to Stella in a 1967 series of lithograph portraits of their mutual friend Henry Geldzahler, which he adorned with miniature proofs of one of Stella’s own prints. OLD MASTER PAINTINGS | NEW YORK | 1 MAY 2019
Jan Sanders van Hemessen’s Double portrait of a husband and wife, seated at a table, playing tables ($4-6 million) is unquestionably one of the most exciting Early Netherlandish paintings to appear on the market in years. It is a masterpiece by one of the foremost painters in Antwerp during the second quarter of the 16th. Signed and dated 1532, it is among the earliest life-sized double portraits in Netherlandish art, and represents a wealthy Flemish burgher and his wife, seated at a table in their home, playing an antecedent of the game known today as Backgammon. Though there existed a longstanding tradition of artists representing amorous couples engaged in courtly pursuits such chess and other table games, Hemessen appears to be one of the first painters to include the game in a portrait in this manner. The painting is filled with lavishly-rendered details, including a marvelous still life of fruit, a parrot, and opulent fabrics and jewels. Most likely, many of these objects were imbued with symbolic meaning, particularly the game board, which carried associations of temptations and lasciviousness. The couple, however, are clearly playing on the same team, harmoniously engaged against a common foe - here perhaps interpreted as anyone who would lead them from the virtuous path in the game of life. Stella acquired this magnificent Renaissance oil on panel from Christie’s London in 1984, where it was sold by Mary, Countess Crawford and Balcarres, having presumably been in her family’s collection since at least the 19th century. POST-WAR AND CONTEMPORARY ART | NEW YORK | 15 MAY 2019
Highlights of the collection will be presented at the Christie’s New York Evening Sale of Post-War and Contemporary Art on 15 May, including two of the artist’s iconic paintings from the 1970s and the only example of a shaped canvas by Stella’s friend and colleague, Helen Frankenthaler.

Frank Stella’s monumental Lettre sur les aveugles I, 1974 – belongs to the artist’s celebrated Diderot series, a group of paintings which built on his iconic Concentric Square format that the artist initiated in 1962. Taking a brief hiatus from these ground-breaking geometric compositions in the late ‘60s, the following decade Stella would return to them triumphantly with works such as the present example, increasing their scale and the complexity of coloration. The painting’s simultaneous formal cohesion and discordant color combinations create a precisely wrought tension within the painting. Lettre sur les aveugles I, epitomizes the artist’s output from this important period of his career. Helen Frankenthaler’s Beach Horse, 1959, is the only known example of a shaped canvas by the artist, making it a rare painting in which she strikes a delicate balance between figuration and all-out abstraction. The fact that Stella acquired the only known shaped canvas by the artist, demonstrates his affinity for collecting works that reflect subtle, and yet pivotal moments within artist’s careers. It is particularly fitting given his own investigation into the dissonance between painted lines and the shape of the canvas. Around the same time that Beach Horse was executed Stella began to remove sections of paintings that seemed superfluous. The earliest examples — the Aluminium Paintings (1960) and Copper Paintings (1960-1961), were followed by works that extended the concept of the shaped canvas, including the Irregular Polygon canvases (1965-67) and the later Protractor series (1967-71). In the same year that it was executed, Beach Horse was featured in the artist’s solo exhibition at the André Emmerich Gallery in 1959 and a year later, was included in her first museum retrospective at the Jewish Museum, where it was hung among several of the most important examples of Frankenthaler’s early career.

Painted in 1967, WWRL, a double concentric square, is a playful extension of Frank Stella's Black Painting series from the late 1950's, in which he approached painting in a highly reductive manner anticipating Minimal Arts' repetitive elements of shape and form, deconstructing the manner in which viewers see the surface of a painting. Stella's maxim, "What you see is what you see", is a take on Warhol's provocative statement: "If you want to know all about Andy Warhol, just look at the surface, there is nothing behind it." The same idea can be applied to Stella, but rather than playing with how far painting can be assimilated into pop culture or the representation thereof, he chooses to keep the use of the paint itself simple: with no inherent rules or boundaries, no center or focus, the paint follows the arbitrary boundaries of its canvas shape. In this sensual "color versus black and white" concentric square diptych, Stella explores yet another way of presenting painting and the canvas outside its "normal" and "rectangular" boundaries in much the same way as in his signature shaped canvases.