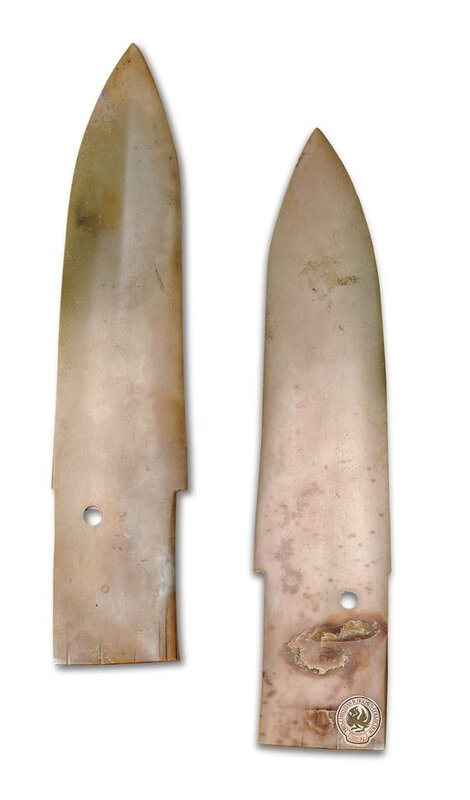 The long, slightly curved blade with beveled edges and a subtle median ridge extending the full length on both sides, with a hole drilled from one side piercing the tang which is carved with parallel notches, the grey-green stone altered to an attractive warm taupe color, one side of the tang with a small patch of milky caramel color incised with a two-character inscription.

Property from a Private American Collection One carved from a long, curved section with prominent median ridge, crisply carved on one side with three taotie masks with large hooked horns, some remains of turquoise inlay; the other carved with a portion of a dragon head above a band with whorl motif reserved on a leiwen ground, above a band of leiwen-filled blades, the underside incised with similar design, one box.

Note: A group of Shang-dynasty bone fragments carved with full or partial taotiemasks is illustrated in Homage to Heaven, Homage to Earth, Chinese Treasures of the Royal Ontario Museum, Toronto, 1992, p. 215, pl. 121. Bone fragments of this type have been excavated from tombs in the 'royal cemetery' at Anyang, but as the pieces are fragmentary, there is uncertainty as to their use. Comprising an arched pale greenish-grey dragon pendant, carved with a bottle horn and single claw, the remainder of the arc behind its curled tail ending in a slightly flared blade, the stone with some opaque alteration; a bird pendant, with large circular eye, large claw and bifurcated, fish-like tail, the stone altered to a buff-grey color; and a greyish-green bird pendant carved with hooked beak, circular eyes, long crest and upswept wings above a notched tail, the stone with some opaque buff alteration, three boxes.

Note: Two jade dragon pendants similarly carved with a slightly flared blade behind the curled tail are illustrated by J. Rawson, Chinese Jade from the Neolithic to the Qing, British Museum, 1995, pp. 216-7, nos. 12:11 and 12:12, where they are dated Shang period, c. 1200 BC.
Rawson also illustrates, p. 227, fig. 1, related bird pendants with upswept wings which the author states became widespread in the Western Zhou period. 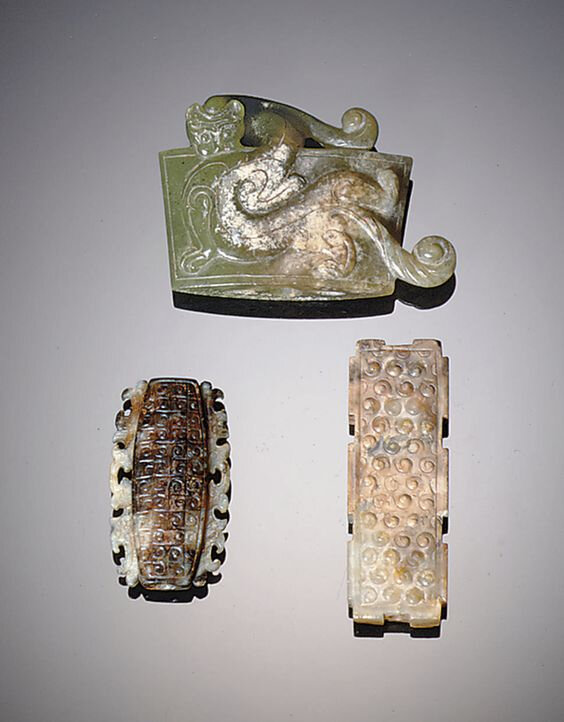 The scabbard chape carved on one side with a sinuous chilong, the tail, head and neck extending beyond the edges of the chape, the reverse with a taotie mask, the stone with some opaque buff alteration, traces of cinnabar; the notched rectangular bead carved on both sides with comma spirals, the greenish-white stone altered in areas to an opaque warm buff color; together with a pale grey and blackish-brown jade ovoid bead, Eastern Zhou period or later, three boxes.

Exhibited: San Francisco, Golden Gate Park, Hall of Flowers, Treasures of the Orient, 1979, no. 18b.

Of soft pale grey-green color with attractive lighter and darker mottling throughout, the thin blade of tapering rectangular shape with slightly beveled cutting edge, pierced with three holes drilled from one side, the stone now opaque and with soft, satin-like polish.

Provenance: Acquired in Hong Kong in the mid-1980s.

Note: Compare the jade blade attributed to the Qijia culture of similar shape and material excavated in Xiakou, Gulang, Gansu province, illustrated by Gu Fang, The Complete Collection of Jades Unearthed in China, vol. 15, Beijing, 2005, no. 39. The first of trapezoidal outline, the longest edge beveled on one side, with three holes drilled along one edge and a fourth closer to the center, the dark grey-green stone with some opaque greyish-white alteration; the second of similar shape but tapering to one end, the grey-green stone extensively altered to an opaque mottled grey color, two wood boxes.

Note: The wood box for the tapering dao bears an inscription stating that the piece was excavated in Henan province from the Yu Family castle. The thick, flattened bi carved with rounded outer edges and a central hole drilled from either side leaving a step inside the aperture, the stone of deep grey-green tone with extensive opaque alteration of buff color; the cong carved from stone that has altered to an opaque mottled variegated grey tone with dark veining, two boxes. One carved at the four projecting corners with two registers decorated with shallow grooves, the grey-green stone with reddish-brown mottling and darker veining; the second carved from grey-green stone with some greenish-brown mottling and opaque buff mottling; the third of taller, less wide proportions, the stone now opaque and of warm buff and greyish-brown color from alteration in burial, three boxes, two wood stands. The thick rectangular scepter tapering slightly towards the haft which is pierced from one side with a single hole situated between a pair of notched projections, the stone of even, dark moss-green tone; the thin axe also of rectangular shape with small perforation at one end opposite the flared, rounded cutting edge, both long edges with a pair of notched flanges, the stone of mottled reddish-tan and milky beige tone with some darker markings at the extremities, two boxes.

Note: A jade axe dated to the Western Zhou period of similar shape and with similar notched flanges was excavated from tomb no. 2 at Baicapo, Lingtai, Gansu province, and is now in the Gansu Provincial Museum. See Gu Fang, The Complete Collection of Jades Unearthed in China, vol. 15, Beijing, 2005, no. 65.