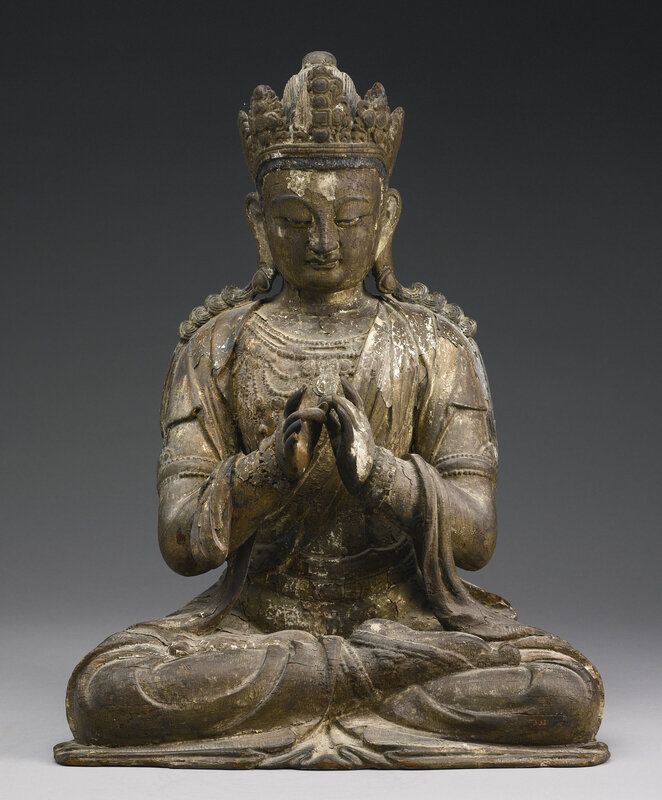 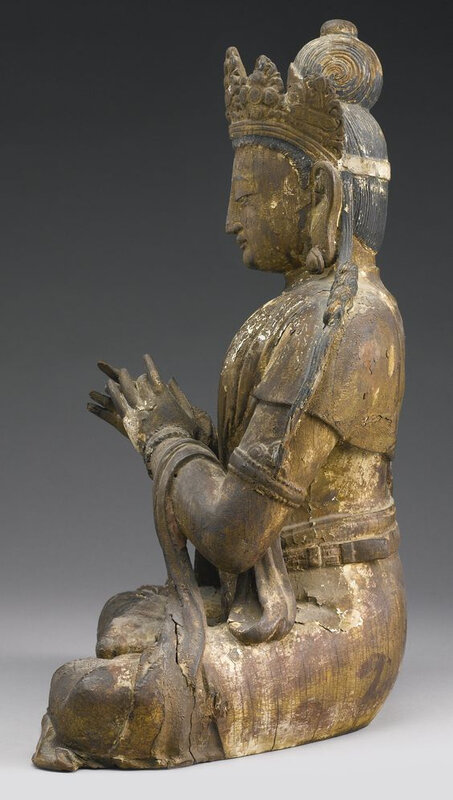 portrayed seated in dhyanasana with hands in dharmachakramudra, dressed in shawl, scarves and a dhoti, an elaborate jeweled necklace adorning the chest, the face with serene expression, and the hair pulled up into a tall chignon behind the five-tier crown and falling in curled tresses down either shoulder.

Property from the Collection of Alex and Elizabeth Lewyt.

Note: Vairocana is one of the Five Dhyani Buddhas which represent the five qualities of the Buddha. His symbol is the wheel, displayed in the hand gesture of the present lot, which symbolizes the Buddha's teachings.  He represents the wisdom of the Buddha and is therefore also portrayed with his hands in the vajramudra with the index finger of the left hand clasped by the five fingers of the right, in a gesture called the wisdom fist. In esoteric Buddhism, these five Buddhas are often portrayed wearing elaborate crowns and jewelry.

After the Xuande period, there was less direct Imperial involvement with Tibetan Buddhism until its resurgence in the early Qing dynasty. There is a small group of surviving early Ming Buddhist bronzes, but wood figures are rare. In style, this piece is related to the extremely rare Xuande period polychrome wood and gesso figure of Guhyasadhana Avalokiteshvara, sold in these rooms, 16th September 2008, lot 173. The profile of the face with the straight nose and linear downcast eyes, the chignon, the way the hair curls over the shoulder, and the draping of the dhoti, are all stylistically similar. In addition, the bracelets, shown as single bands edged with pearls, and armlets, additionally supporting a jeweled element, are consistent with the way such adornments are portrayed in early Ming bronzes.

For a Late Yuan / Early Ming dynasty wood figure with its gilt-lacquer relatively intact, see Christie's New York, 19th-20th September 2013, lot 1522. This example has comparable proportions, and the way the hair is dressed and falls over the shoulders is also similar.