A rare and important 'blanc-de-chine' figure of Guanyin, by He Chaozong, Ming dynasty, Wanli period, dated 1619

A rare and important 'blanc-de-chine' figure of Guanyin, by He Chaozong, Ming dynasty, Wanli period, dated 1619 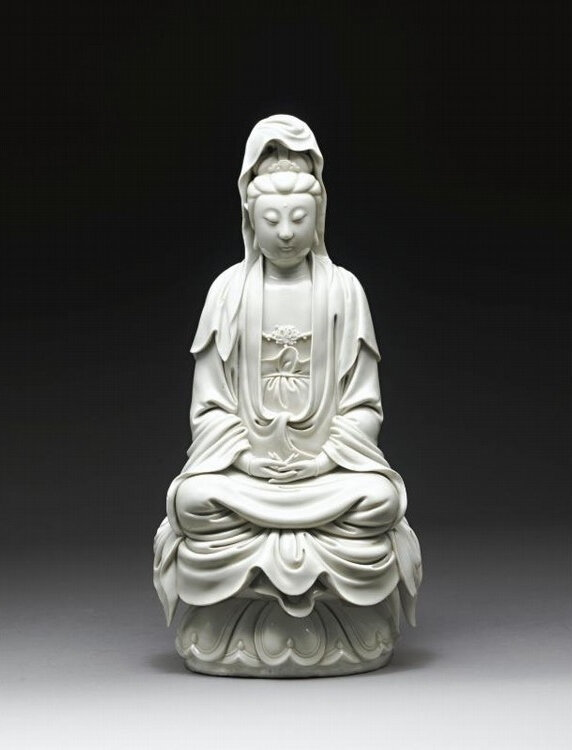 enthroned on a lotus petal base seated in dhyanasana with hands clasped together resting on her lap in the dhyana mudra, dressed in voluminous white robes opened at the chest revealing a jeweled necklace with a lotus flower, her serene face with downcast eyes framed by hair swept up into a chignon secured with a ruyi head diadem and covered with a mantle falling to her shoulders, the back clearly stamped with the seal reading He Chaozong yin and inscribed at the foot of the throne in the front with the characters jiwei nian,equivalent to 1619 AD.

Note: This distinguished and important figure is one of three known similar versions of the model by He Chaozong, all in the US; one being in the Koger Collection, illustrated in John Ayers, Chinese Ceramics in the Koger Collection, London, 1985, cat.no. 147 and the other in the Blumenfield Collection, illustrated in Robert Blumenfield, Blanc-de-Chine: The Great Porcelain of Dehua, Berkeley, 2002, pp. 129-136 and 163-165, pls. A, B.

The inscribed date of jiwei nian, corresponds to 1559, 1619 or 1679.  Until recently, He's dates were unknown and believed to be active during the Kanxi period.  However, recent scholarship has indicated that He actually lived during the late 16th through the first half of the 17th century.  In the 1763 Quanzhou Fuzhi gazetteer, a section entitled 'Ming Specialists' (yishu), of whom no more than half a dozen are to be considered as artists, it is recorded that He Chaozong was a noted modeler of porcelain figures and lived during the Ming period.  In combination with the mention in gazetteer and a Guanyin in the Blumenfield Collection with a mandorla inscribed with a He Chaozong inscription dating to the Wanli period, 1618, a year before this figure, the evidence seems to indicate that He Chaozong was active during the Ming Dynasty.

The present figure is considered by John Ayers to be among the finest He Chaozong works, and of documentary importance in the dating of the entire corpus of early 'Blanc-de-Chine'.  It was included in the key exhibition at the China Institute, New York, in 2002 and the associated exhibition correspondence accompanies this lot.