Decorated in gold, silver, red, black and yellow hiramaki-e and takamaki-e against anishimeji (imitation stone) ground with millet on a tea kettle and with a grasshopper perched on the handle, signed Gyonen nanajusan okina Zeshin [Zeshin at the age of seventy-three].

Note: One of many lacquer techniques Zeshin created was bronze-lacquering, or seido-nuri. For the ground of this tray, he created a dark-green ground by scattering bronze and charcoal dusts on the wet lacquer and polishing them with oils and powders. The surface is textured with a wrinkled pattern to create the luster and tone of aged bronze ware. He used red lacquer, combined with clear lacquer and black lacquer shading, for the large copper kettle used by farmers to carry tea to the fields during the festive autumn harvest. Straw is stuffed into the kettle spout, perhaps to keep out insects. The grasshopper clinging to the handle is incised to great effect. Freshly harvested rice stalks are painted in raised gold, silver and blue-gold or ao-kin, an alloy of gold and silver. There are other trays with this design, indicating that the Irving lacquer tray was originally one of a set of five.
Other examples from this set, all nearly identical, are in the Honolulu Museum of Art, the Khalili Collection, London, and, formerly the Edson Collection. For the Honolulu tray, see The Art of Shibata Zeshin: The Mr. and Mrs. James E. O’Brien Collection at the Honolulu Academy of Arts(Honolulu: Honolulu Academy of Arts, 1979), pl. 58. For the Khalili tray, see the cover image of Shibata Zeshin: Masterpieces of Japanese Lacquer from the Khalili Collection, London, 1997. For the tray formerly in the Edson Collection, see Edo Chic, Meiji Technique: The Art of Shibata Zeshin featuring the Edson Collection, Tokyo, 2009, pl. E-21. See, also, Shibata Zeshin ten, Shibata Zeshin exhibition, Tokyo: Itabashi Museum, 1980, pl. 54. 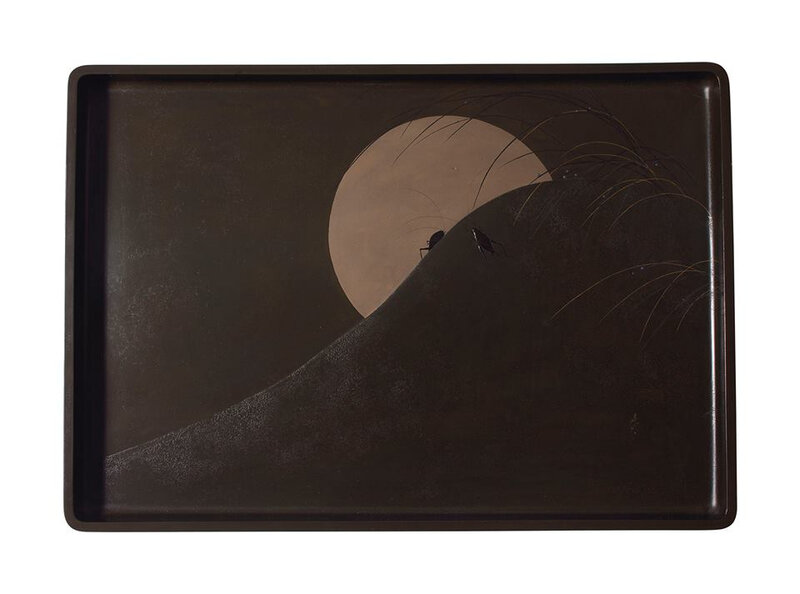 Decorated in polychrome lacquer and gold and silver maki, with two crickets of amidst pampas grasses in a moonlit landscape, signed lower right Zeshin.

Note: Zeshin, a keen-eyed naturalist, transforms a tray meant for clothing into an evocative moonlit landscape. Seen from a low vantage point, a full moon of pale, parchment-color lacquer illuminates a gently sloping hillock with mottled black lacquer surface. Two crickets stand out with startling, playful clarity in polished black lacquer. Pampas grasses echo the rounded forms of the moon and hillside in slender lines of gold and black lacquer weighted with silver dewdrops that glisten in the moonlight. The dark, green-brown sky enhances the dreamlike atmosphere. This intimate close-up of nature suggests a low window opening onto a garden in autumn, a season that evokes a sense of melancholy and regret for the passing of time. In Japan, gazing at the moon and listening to the sounds of insects have long been tranquil ways to spend an autumn evening. 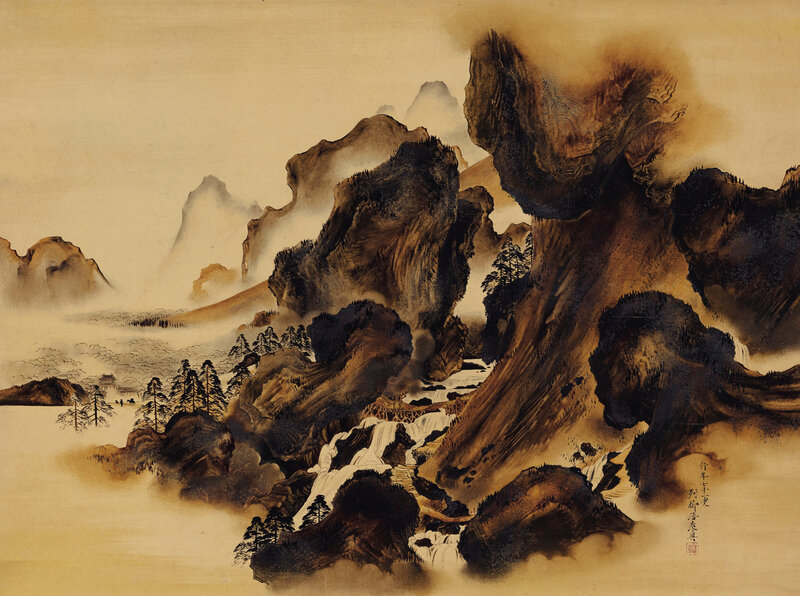 Zeshin was a virtuoso technician: he invented flexible colored lacquers that could be used on paper. Painting with lacquer, a viscous and sticky substance, was extremely difficult. The artist’s patience and skill in recreating delicate details is almost unimaginable. Here, he chose a Chinese subject that was much beloved in Edo-period painting, the path in the mountains of Shu in Sichuan province in southwestern China, where the Tang emperor Ming Huang fled with his concubine, Yang Gueifei. The capital of Chengdu appears in the distance at the far left, delicately rendered and obscured by mist. A precarious plank bridge crosses over the cascading river that cuts a deep gorge through dramatic, rugged mountains. The artist skillfully contrasts meticulous detail with forceful, swirling brushwork. This small hanging scroll, a technical tour-de-force, is without doubt one of Zeshin’s finest lacquer paintings.

Well known in the West as a painter and a lacquer artist, Shibata Zeshin enjoyed longevity in both his life and his career. He began his prolifc and versatile career at age eleven as an apprenticeship with the leading lacquer artist, Koma Kan’ya (Kansai II, 1767–1835) the tenth-generation head of a lacquer studio in Edo (now Tokyo) that had served the Tokugawa shogunate since 1636.

Ever ambitious, at sixteen, Zeshin also began to train as a painter under Suzuki Nanrei (1775–1844) of the Shijō school, moving to Kyoto around the age of twenty to apprentice with another Shijo-school painter, Okamoto Toyohiko (1773–1845), who favored the new Western naturalism. In Kyoto, Zeshin would become profcient in the traditional arts of tea ceremony and poetry, notably haiku. He returned to Edo in his late twenties to take up his calling as a lacquer artist. A master of evocative designs and inventive, subtle new techniques, Zeshin was soon acclaimed as the leading artist in this painstaking and time-consuming medium. His lacquers, dazzling in their technical virtuosity and trompe l’oeil efects (he could imitate metal, wood and ceramics in lacquer), are still the most highly coveted by Western collectors. His success may be measured by the fact that his large atelier numbered among its clients not only prominent businessmen and government oficials, but Emperor Meiji himself. His public commissions included decorating wooden doors and ceiling roundels for the new  imperial palace. In 1890, when the government inaugurated the title “Artist to the Imperial Household” (Teishitsu Gigeiin), Zeshin was one of the ten artists—and the only lacquerer—to receive the award.

It was in his old age, during the 1870s and 1880s, that Zeshin added an unusual new technique to his repertoire. In response to the popularity of oils in the Meiji period, he began to paint with lacquer on paper, silk, and wooden panels. The naturally dark colors and thick, lustrous surface texture of the colored lacquer added to the illusion of Western pigments. However, painting with lacquer in traditional Japanese scroll formats presented special challenges—the lacquer had to be fexible enough to withstand cracking as scrolls were rolled and unrolled.

Zeshin ultimately developed his own unique formula, adding substances that made the lacquer slightly fexible, so that it would not fake of. He achieved such remarkable success that even today he holds a place of preeminence as Japan’s most celebrated “lacquer painting” (urushi-e) artist. Moreover, his fame spread abroad during his lifetime, and his lacquer paintings were featured in numerous international exhibitions, including the Vienna World Exposition in 1873, the Philadelphia Centennial Exposition in 1876, and the frst Paris exhibition of Japanese painting in 1883.

Florence and Herbert Irving had a special relationship with the Tokyo dealer Klaus Naumann (b. 1935), from whom they purchased three important works by Shibata Zeshin (lots 810, 811, 812). They sought out Naumann in Tokyo on a trip to Japan around 1986 and immediately purchased several of the Negoro-ware red lacquers for which their collection is known. (For more about Naumann and the Irvings, see ”Still Learning”: A Conversation with Klaus F. Naumann,” in Impressions 40 [2019] the journal of the Japanese Art Society of America, <www.japaneseartsoc.org>.) Later, after the collection had expanded to include fne Chinese and Korean lacquers, Naumann advised the Irvings to include works by one of Japan’s greatest artists, Zeshin—no collection would be complete without some choice pieces by this artist. Zeshin had already come into the spotlight in America with the publication and exhibition in 1979 of the Mary Louise and James E. O’Brien collection of over one hundred of the artist’s lacquers, lacquer paintings, and prints formed in California and donated to the Honolulu Academy of Arts (now the Honolulu Museum of Art). In 2007, over ffty Zeshin lacquers and paintings from the Catherine and Thomas Edson Collection were exhibited at the San Antonio Museum of Art, Texas, where they remain as a promised gift. In 2009, over seventy of the Edson’s Zeshin lacquers were exhibited in a traveling exhibition shown at three museums in Japan. As Joe Earle noted in his excellent introduction to the San Antonio catalogue, Zeshin’s visual world is “so distinctive that there is normally no need to search for his tiny signature, often scratched with a rat’s tooth in the dark surface.”