A large and rare white marble carving of a bodhisattva, Tang dynasty (618-907)

A large and rare white marble carving of a bodhisattva, Tang dynasty (618-907) 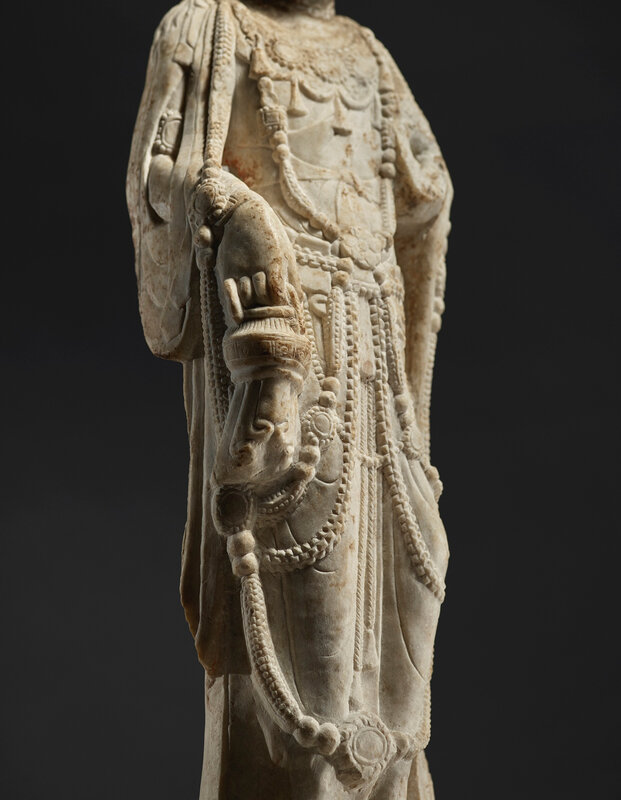 beautifully carved in the round, standing in contrapposto with a basket held in the proper right hand, the body lavishly adorned with beaded necklaces in scalloped tiers and jeweled pendants, an elaborate multi-strand necklace harness crossed over the sensual, rounded belly and looped to either side, pendent over the arms, the lower section of the necklace hanging just above the ankles and centered by a floriform pendant, the dhoti ribbon-tied at the waist beneath a chain belt, hanging in folds cascading from the contours of the legs, the head with a five-pointed diadem, all supported on a lotus base, further raised on a later stone lotus base with four mystical creatures supported by a square plinth (2).

Literature: ‘A Stone Statue of Guanyin’, The Bulletin of the Cleveland Museum of Art, vol. 3 (November 1915), p. 3.
William H. Wolff Yearbook of Far Eastern Art, New York, 1965.
Note: This figure is regal in countenance and adornment, its expression and idealized features counterbalanced by a tall and richly carved crown and sumptuous jewelry. Immediately it induces a sense of awe and contemplation to those that lay eyes on it, as described in a short article from 1915 in the The Bulletin of the Cleveland Museum of Art where this sculpture featured:

"Is there anything wanting in the dignity of this figure, in the grandeur of conception, in the sculptural effect, in the proportion, or in the adornments which so closely resemble the real? Here we have something concrete, and not merely a strange expression of foreign religious thought. We readily associate tenderness, compassion and mercy with this beautiful god. Rather than lamenting the left hand which is gone, let us look at the softness of the brow where the hair is artfully caught back under the headpiece, at the fullness of the cheek and neck, and the gracefully draped ropes of jewels. Is it not beautiful!"

Since the introduction of Buddhism in the first century AD, images of Buddha and bodhisattva were believed to be imbued with the spiritual presence of the deity they depicted, and served as bridges between the deity and devotees. Helmut Brinker in ‘Early Buddhist Art in China’, Return of the Buddha. The Qingzhou Discoveries, Royal Academy of Art, London, 2002, pp. 20-33, discusses the role of Buddhist images and suggests that their making ‘was not primarily an artistic act…it was the realization of a sacred image’ (p. 22). Sacred text and Buddhist images brought back to China by monks who traveled through India and Central Asia, provided strict guidance for the making of these images. Depictions of bodhisattva wearing sumptuous jewelry, such as the present figure, derived from detailed descriptions in religious texts.

This figure effortlessly spans the aesthetic of the Sui and Tang dynasty, when a more naturalistic approach to depictions of Buddhist deities was gradually adopted. After a long period of cultural and military disunion, China was first unified under the Sui dynasty in 581, and in 618 the general Li Yuan founded the Tang dynasty. The Tang is considered one of the most prosperous periods in Chinese history, marked by economic and military expansions, successful diplomatic relations and a revolution in the official examination system, which had a profound effect in the creation of a new social elite. Under the Tang, the capital Chang’an became an international metropolis, which boasted some two million inhabitants including a sizeable community of foreign residents.

From the early years of the dynasty, Buddhism was supported by the Imperial court, who actively sponsored major building projects and encouraged monks to travel abroad and bring back sacred scriptures. Emperess Wu Zetian (624-705), in particular, sponsored the building of several important caves and the monumental sculptures of the Fengxian Temple at Longmen. Empress Wu sought to draw parallels between her Imperial court and the Buddhist hierarchy in an effort to impart a spiritual significance to her rule. Sculptures of the period embody the new Tang style, and it is in this stylistic context that this figure stands firmly. A keen observation of human anatomy and the natural world is evident in the depiction of these figures’ facial features, the subtle movement of their bodies and natural sway of their garments. Figures appear imbued with a physicality and sensitivity not present in their Sui counterparts. This new style continued to evolve and by the 8th century, carvers made highly realistic sculptures modeled with sensuous and muscular bodies.

Unlike the sculptures at Longmen, the present figure was conceived and carved in the round. Free standing sculptures from this period are rare, and even rarer are those of this exceptional quality and carved from marble. Furthermore, extant examples of Tang free-standing marble sculptures stylistically appear to belong to a later phase of development; a very large marble torso excavated in Xi’an, is illustrated in Zhongguo meishu quanji. Diaosu bian [The complete series on Chinese art. Sculpture], vol. 4, Beijing, 1988, pl. 53; a smaller torso in the Nelson-Atkins Museum of Art, Kansans City, was included in the exhibition Chinese Buddhist Sculpture from the Wei Through the T’ang Dynasties, National Museum of History, Taipei, 1983, cat. no. 28; another in the Museum of Fine Arts, Boston, is published on the museum’s website, acc. no. 07.10; and a fourth from the collection of Evelyn Annenberg Hall, sold at Christie’s New York, 29th March 2006, lot 182. A kneeling marble bodhisattva in the Shanghai Museum, Shanghai, is illustrated in Ancient Chinese Sculpture Gallery, Shanghai, 2000, p. 25, two large marble esoteric figures, part of a group of ten sculptures excavated in 1959 and probably from the Anguo Temple in Chang’an, are illustrated in Angela Falco Howard et. al., Chinese Sculpture, New Haven, 2006, pls 3.121 and 3.122; and another in the Museum of Fine Arts, Boston, acc. no. 12.63.

While no closely related example appears to have been published, this figure bears some similarities to two wood sculptures of bodhisattva: one in the Todaiji temple complex in Nara, illustrated in Matsubara Saburō, Chūgoku bukkyō chōkoku shiron / The Path of Chinese Buddhist Sculpture, Tokyo, 1995, vol. III, pl. 634, and the other in the Cleveland Museum of Art, Cleveland, illustrated in Hai-wai yi-chen / Chinese Art in Overseas Collections. Buddhist Sculpture, vol. II, Taipei, 1990, pl. 126.

It was under the Tang dynasty that Buddhism reached its most flourishing phase. The years of cultural and political division that accompanied dynastic changes from the fall of the Han through the establishment of the Sui and Tang dynasties, gradually led to the rise of Pure Land Buddhism. Centered around the devotion of Amithaba, or a bodhisattva, this doctrine allowed devotees to be reborn in Sukhavati, the Western Paradise. Consequently, images of Amithaba and of bodhisattva proliferated in this period, especially those of Avalokitesvara, the Bodhisattva of Compassion and Mercy, who was not prominent in early Indian Buddhism but acquired multiple manifestations already in the 6th century. The present figure appears to depict one of such manifestation, recognizable from the depictions of meditating Amithaba on the crown, and the jar held in the right hand.