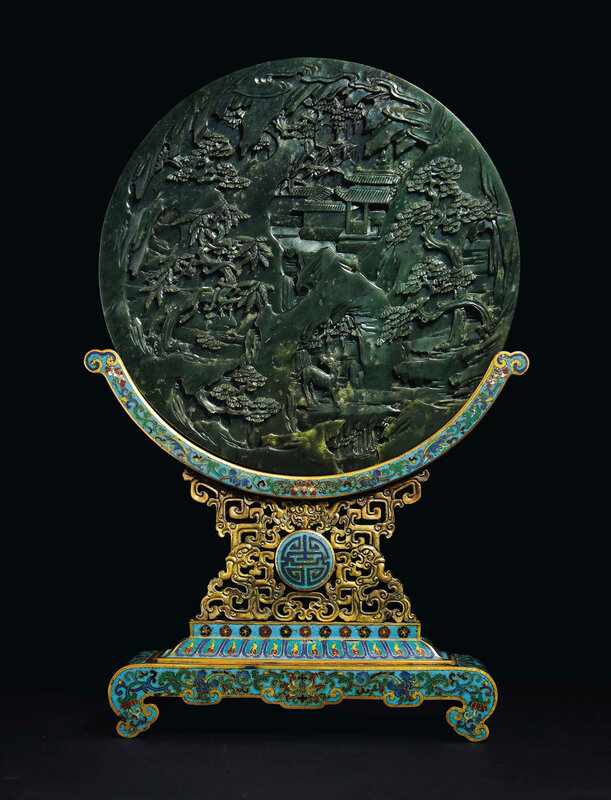 Each side well carved with a scene of a deer and a pavilion in a mountainous setting of rockface and trees, the stone of rich spinach-green color.

Note: This finely carved jade circular panel is mounted on an elaborate cloisonnéenamel stand and would have been placed to decorate the side or main tables in the Qing dynasty (1644-1911) imperial halls. Stands for table screens are usually made of wood, with zitan being particularly prized for lavish imperial stands during the Qianlong period (1736-1795). It is extremely rare to find a stand made from cloisonné enamel, as seen in the present example. A similarly carved Qianlong-period green jade table screen matched with an elaborate gilt-bronze and cloisonné enamel stand, from the Lady Wolfson Collection, was included in the Oriental Ceramic Society exhibition, Chinese Jade throughout the ages, London, 1975, p. 126, no. 412.

The emperor Qianlong particularly advocated that jade carvings should carry the spirit of paintings by famous past masters. It is recorded that some classical paintings from the emperor's own collection were ordered to be reproduced in jade, such as the well-known painting entitled Travellers in the Mountain by the eminent painter Guan Tong, of the Five Dynasties period (AD 907-960). Jade landscape carvings of this type were particularly favored by Qianlong. In one of his poems, Qianlong refers to a jade panel: "It is carved into a panel with the scene of 'A Riverside City on a Spring Morning'. Imagination is exerted to turn the natural undulation or ruggedness into an appropriate landscape... It takes ten days to carve with a tiny bit of water and five days to shape a piece of rock. The crafting is indeed very time-consuming." (see Yang Boda, "Jade: Emperor Chi'en Lung's Collection in the Palace Museum, Peking," Arts of Asia, March-April 1992, p. 90).