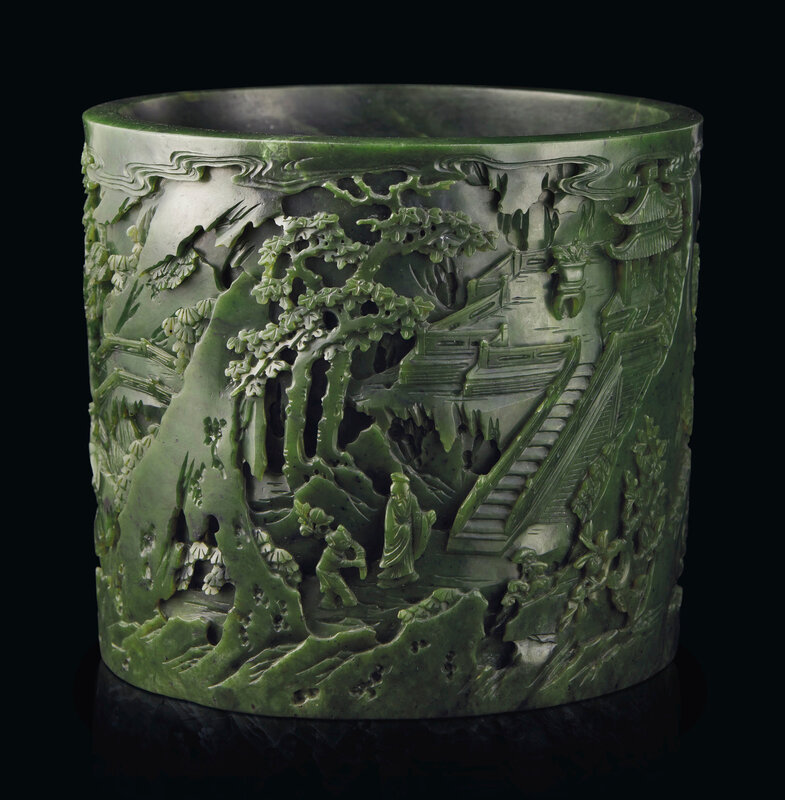 Intricately carved around the sides with a continuous mountainous landscape, the rocks and trees framing various vignettes, including a scholar accompanied by an attendant carrying a peach branch standing at the base of stairs leading up to a pavilion on a terrace above; a scholar and an attendant on a rocky path leading to a footbridge; a pair of deer; and another pavilion.

Note: A number of spinach-green jade brush pots of similar date have been published and can be divided into two groups: one with countersunk base such as the present example and the other with shallow tab feet. Two brush pots of similar form in the National Palace Museum, Taipei, are illustrated in The Refined Taste of the Emperor: Special Exhibition of Archaic and Pictorial Jades of the Ch’ing Court, Taipei, 1997, nos. 55 and 58. Another brush pot of this form decorated with a similar Daoism-inspired scene was sold at Christie’s, New York, 18 March 2009, lot 411. The footed examples include one illustrated by Stanley Charles Nott in Chinese Jades Throughout the Ages, London, 1937, pl. CXXVI, and one in the Palace Museum, Beijing, illustrated in The Complete Collection of Treasures of the Palace Museum - 42 - Jadeware (III), Hong Kong, 1996, p. 207, no. 169.