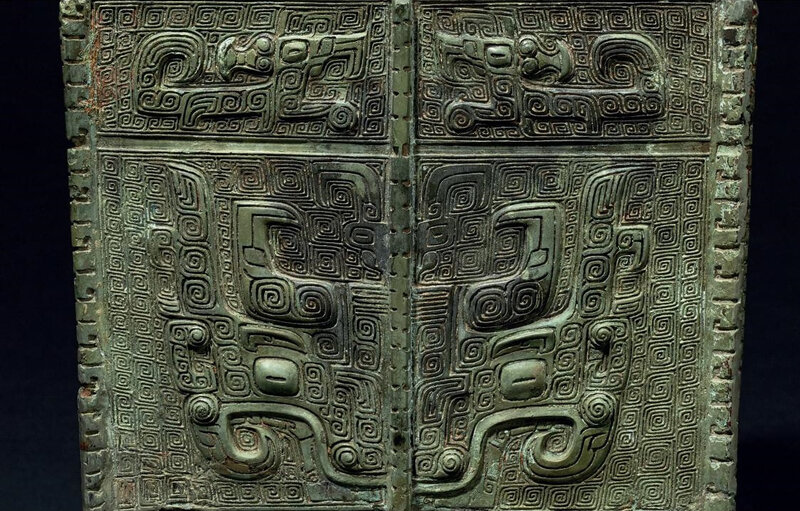 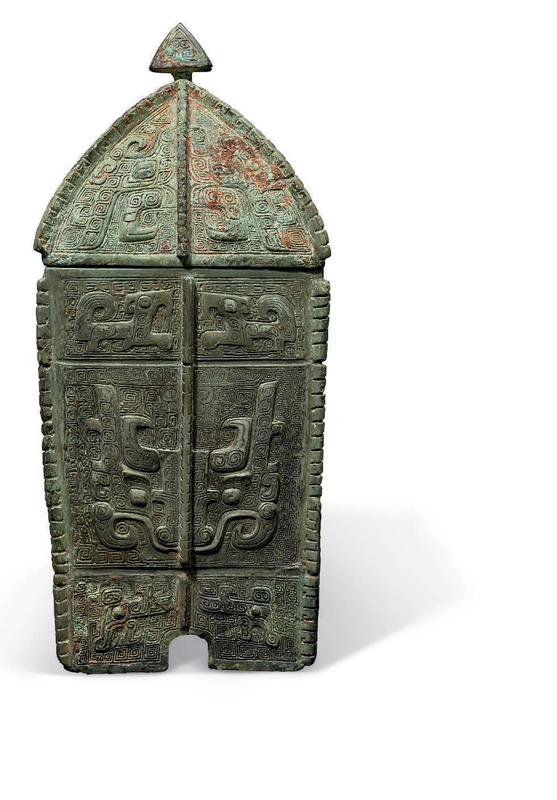 Mr. and Mrs. Raymond A. Bidwell on the porch of their home at 16 Ridgewood Terrace, Springfeld, Massachusetts. Photographer unknown

As an undergraduate at Harvard College (1895-1899), Mr. Bidwell purchased his frst Japanese print and piece of Chinese pottery. These early acquisitions sparked a life-long interest in collecting. Mr. Bidwell selectively purchased a few objects each year toward the goal of forming a collection that traced the historical developments of Chinese bronzes, pottery and porcelain. The high quality of his taste is clearly demonstrated by this superb Shang bronze fangyi.

Note: With its successful combination of elegant proportions, strong shape and fine execution of details, this vessel represents the most refined bronze casting tradition of the late Shang period. A similar fangyi, formerly in the collection of Arthur M. Sackler, and now in The Metropolitan Museum of Art, New York, is illustrated by Max Loehr in Ritual Vessels of Bronze Age China, New York, 1968, pp. 90-91, no. 37, in which the author notes “I know of no other Fang I to match this exquisite specimen in proportions, design, and refined technique.” The present fangyi may be considered to be of similar quality as the Metropolitan Museum of Art fangyi.

Fangyi appear to have been one of the most prized of ritual vessels, as they have been found in fewer and more sumptuous tombs than more common shapes such as gu, jue, and ding. The term fangyi is a traditional attribution made by Song dynasty (AD 960-1279) scholars. Fang literally means square and refers to the faceted form. Yi is a general term for ritual vessels. Although current scholarship classifies fangyi as wine vessels, ancient scholars as well as some prominent modern scholars such as Chen Mengjia and Bernhard Kalgren believed that fangyi are food vessels: see C. Deydier, Understanding Ancient Chinese Bronzes, Their Importance in Chinese Culture, Their Shapes, Functions and Motifs, 2015, p. 34.

The decoration on all fangyi is arranged in registers, and typically feature with a large taotie mask on the body, small dragons or birds on the foot and above the mask, and either a large taotie repeated on the cover or, in at least one instance, a bird. See R.L. d’Argencé, The Hans Popper Collection of Oriental Art, Japan, 1973, no. 2, for the latter. In some instances the decoration is flat-cast or the decorative motifs are filled with leiwen scrolls.

A fangyi of very similar form and decoration, but with a band of bird motifs below the mouth rim, from the Ernest Erickson Collection, is illustrated by R. Bagley, Shang Ritual Bronzes from the Arthur M. Sackler Collections, Washington D.C., 1987, p. 435, fig. 77.15. Another similar fangyi in the Hakutsuru Art Museum, Kobe, is illustrated in Zhongguo qingtongqi quanji: Shang 4 (Complete Collection of Chinese Bronzes: Shang 4), vol. 4, Beijing, 1998, no. 73. Another comparable fangyi, formerly in the collections of Gladys Lloyd Robinson and the British Rail Pension Fund, was sold at Christie’s New York, 24 March 2004, lot 106.