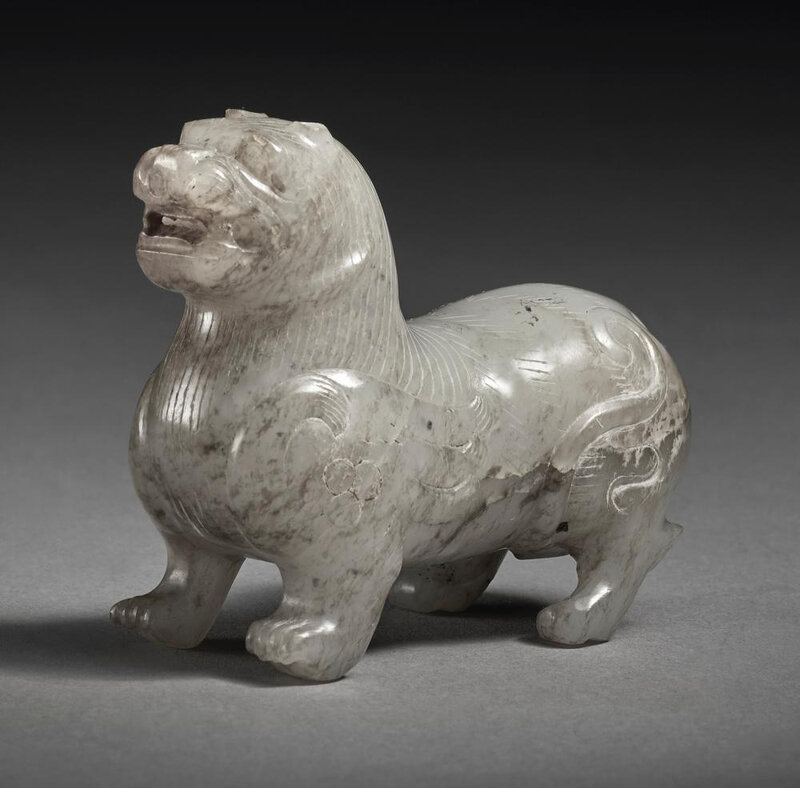 the winged leonine beast standing four square, the compact rounded body tensed on four short legs, the long tail sweeping from between the hind legs to rest on the left haunch, with finely incised lines detailing the mane and body, the translucent gray stone with pale brown inclusions.

Note: This outstanding carving of a winged leonine beast embodies the innate power and other worldliness of its mythical subject. The Han dynasty to Six Dynasties period witnessed a flourishing production of jade animals, with a particular enthusiasm for mythical creatures. In contrast to the majority of earlier two-dimensional jade carvings, made for the afterlife or to adorn the individual, these figural sculptures were created in the round as independent objects, assuming a role of being both a sumptuous display item for appreciation by the elite, as well as serving as a reminder of the powerful supernatural forces latent in the world.

Lions are not native to China but were introduced from ancient Persia and India during the Eastern Han dynasty and were presented as state gifts to the Han court by the kings of Parthia and Bactria. As Buddhism spread through China in the following centuries, guardian animals of the religion gained broad popularity and were produced in a range of media. The present jade carving is reminiscent of the large stone sculptures of lions that lined the 'spirit paths' leading to the tombs of royals and aristocrats. The use of spirit paths began in the Early Han dynasty and continued over the following centuries, with the sculptures becoming more naturalistically rendered by the Tang dynasty. Compare a Han dynasty stone lion found at Luoyang, Henan Province and now in the Shandong Provincial Museum, included in the exhibition Age of Empires: Chinese Art of the Qin and Han Dynasties (221 B.C.–A.D. 200), The Metropolitan Museum of Art, New York, 2017, cat. no. 104.

Originally attributed to the Wei period by C.T. Loo in his 1950 catalogue for his exhibition at the Norton Gallery of Art, this jade beast was later described as late Eastern Zhou dynasty by Alfred Salmony, when the piece was illustrated in his posthumously published book, Chinese Jade Through the Wei Dynasty, New York, in 1963, pl. LX, 3. Stylistically, the present piece compares favorably to other small jade carvings of animals produced from the Han to Six Dynasties periods.

The excavation of the tomb of the Han dynasty emperor Yuandi (r. 48-33 BC) at Xianyang, near Xi'an, revealed a number of fabulous beasts in jade, including a winged bixie, carved standing four square with their stout rounded bodies supported on short legs, see Jessica Rawson, Chinese Jades from the Neolithic to the Qing, Hong Kong, 1995, p. 351, fig. 2a-d.

Mythical beasts of this quality are more commonly depicted in either crouching or striding positions. A crouching mythical beast sold in these rooms, 2nd November 1979, lot 51, now in the collection of Sir Joseph Hotung. It was originally catalogued as Six Dynasties in the 1979 auction but was more recently attributed to the Han period by Jessica Rawson in ibid., pl. 26:7, on account of its similarity to two jades discovered in the Yuandi tomb, illustrated ibid., p. 364, fig. 1.

A winged lion formerly in the collection of Desmond Gure, attributed to the 2nd-4th century was included in the 1963 Exhibition of Chinese Jades at the Museum of Far Eastern Antiquities, Stockholm, in 1963 and subsequently published in Desmond Gure, 'Selected Examples from the Jade Exhibition at Stockholm, 1964: A Comparative Study', The Museum of Far Eastern Antiquities Bulletin, Stockholm, no. 36, 1964, pl. 15. A crouching chimera with incised wings attributed to the Six Dynasties from the collection of Ip Yee was included in the exhibition Chinese Jade Animals, Hong Kong Museum of Art, Hong Kong, 1996, cat. no. 58, and a crouching chimera in the Qing Court Collection, attributed to the Wei to Jin period is illustrated in The Complete Collection of Treasures of the Palace Museum, Jadeware (I), Hong Kong, 1995, pl. 229.