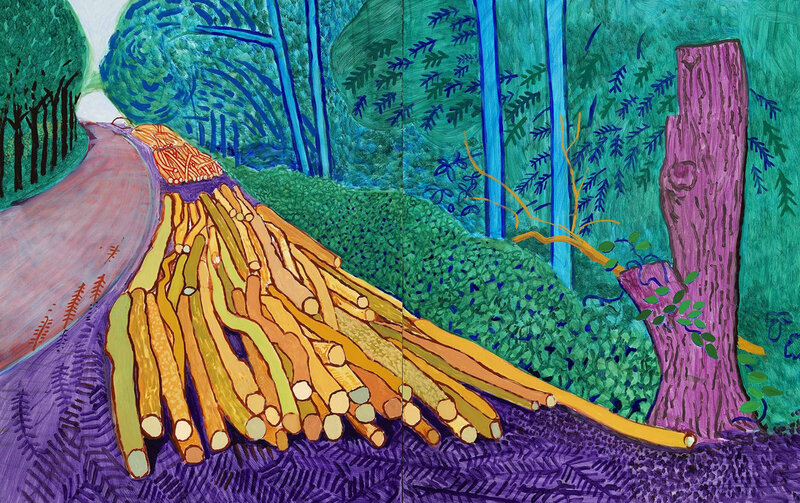 AMSTERDAM.- The colossal works of David Hockney are on display in the Netherlands. For the first time, this spectacular exhibition offers an extensive and colourful exploration of the common ground between the work of Vincent van Gogh and David Hockney. The exhibition 'Hockney - Van Gogh: The Joy of Nature.

The world-famous Yorkshire landscapes by David Hockney (1937) are a vivid feast for the eyes. This is the first time that these works are on display in the Netherlands. The blockbuster exhibition Hockney – Van Gogh: The Joy of Nature demonstrates the unmistakable influence that Vincent van Gogh (1853-1890) had on the displayed works.

One of the highlights is the colossal The Arrival of Spring in Woldgate, East Yorkshire in 2011 (twenty eleven), consisting of 32 parts and measuring 9.75 metres wide by 3.66 metres high. Sketchbooks, videos, photographic drawings and 20 large iPad drawings are also on display for the first time in the Netherlands.

Especially for this exhibition, photographer Rineke Dijkstra created a portrait of the artist, who is now 81 years old. Axel Rüger (Director of the Van Gogh Museum): ‘Hockney is one of the most inspirational artists of our time. This is the first ever exhibition to explore how Van Gogh influenced his work. It is an absolute honour to organise an exhibition such as this’. 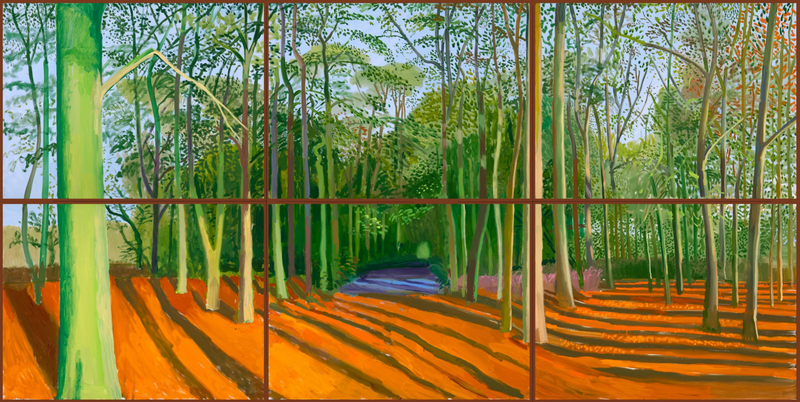 Back to Yorkshire
In the 1990s, Hockney started to return from Los Angeles to his native region: the Yorkshire Wolds in Great Britain, where he painted the characteristic countryside. These paintings, the Yorkshire landscapes, reveal thorough observations of the changing four seasons, and how light, space and nature are constantly in flux. These imposing landscapes offer a vivid insight into Hockney’s love of nature.

The landscape paintings show clear links with Van Gogh’s landscapes, such as The Harvest (1888), Field with Irises near Arles (1888) and The Garden of Saint Paul’s Hospital (‘Leaf-Fall’) (1889). The stylised vertical lines of the tree trunks in the latter work by Van Gogh are analogous to the repetitive lines in Hockney’s renowned The Arrival of Spring in Woldgate, East Yorkshire in 2011 (twenty eleven).

‘Everyone loves spring. Everything emerges and straightens up. It’s like nature’s erection’. - David Hockney 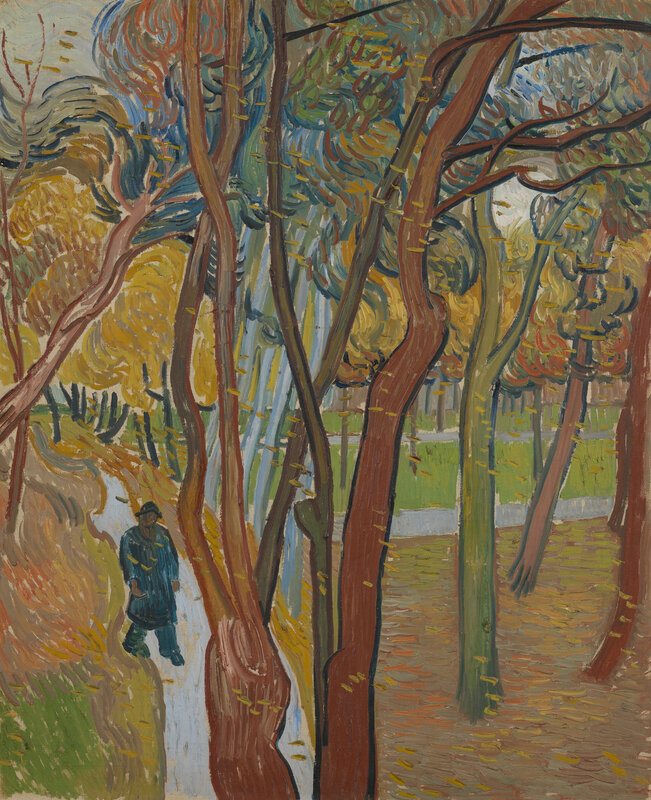 Hockney on Van Gogh
Hockney: ‘His paintings are full of movement. What people love about Van Gogh’s paintings is that all the brush marks are visible and you can see how they are painted. When you’re drawing one blade of grass you’re looking and then you see more. And then you see the other blades of grass and you’re always seeing more. Well, that’s exciting to me and it was exciting to Van Gogh. I mean, he saw very clearly’.

‘The world is colourful. It is beautiful, I think. Nature is great. Van Gogh worshipped nature. He might have been miserable, but that doesn’t show in his work. There are always things that will try to pull you down. But we should be joyful in looking at the world’. - David Hockney Unique exhibition
Hockney – Van Gogh: The Joy of Nature demonstrates the influence of Van Gogh on Hockney’s work, exploring both artists’ fascination with nature, their use of bright, contrasting colours and their experimentation with perspective.

Axel Ruger: ‘The monumental Yorkshire landscapes play a central role, including The Arrival of Spring in Woldgate, East Yorkshire in 2011 (twenty eleven), on loan from the Centre Pompidou, which absorbs the viewer in nature, as it were, and incorporates them in the artwork. These colourful landscapes clearly reveal Hockney’s love of nature; in the exhibition, these works are displayed alongside Van Gogh’s landscape paintings’.

It was in his Yorkshire period that Hockney began experimenting with his iPad, using the device to create scintillating landscapes. Twenty (from a series of over 100) of these accomplished drawings will be displayed in large format in Hockney – Van Gogh: The Joy of Nature. The exhibition features some 60 works, including two series of watercolours and charcoal drawings (that consist of 36 and 25 smaller works respectively). Hockney’s sketchbooks are also on display, as well as several loose sheets that undeniably take their cue from Van Gogh’s drawing style. Hockney – Van Gogh: The Joy of Nature also features masterful videos of the four seasons and one of Hockney’s recent – technically innovative – photographic drawings, alongside watercolours, black-and-white drawings and prints. Especially for the exhibition, photographer Rineke Dijkstra created a portrait of Hockney, in which the artist’s perceptivity and open take on the world are tangible. Inspiration
Hockney – Van Gogh: The Joy of Nature is the first extensive monographic Hockney exhibition to be organised in the Netherlands. The exhibition features works representing all of the techniques in his oeuvre. None of the works have been on display in the Netherlands before. Hockney – Van Gogh follows suit with a series of presentations in which the Van Gogh Museum shows how numerous generations of artists are inspired by Van Gogh’s work. Since 2014, presentations in this series have been on display featuring paintings by Francis Bacon, Edvard Munch, Frank Auerbach, Willem de Kooning and Peter Doig, as well as expressionist works from the Merzbacher Collection. These modern and contemporary artists not only show how Van Gogh inspires, in turn, they also influence how Van Gogh is viewed now and in the future.