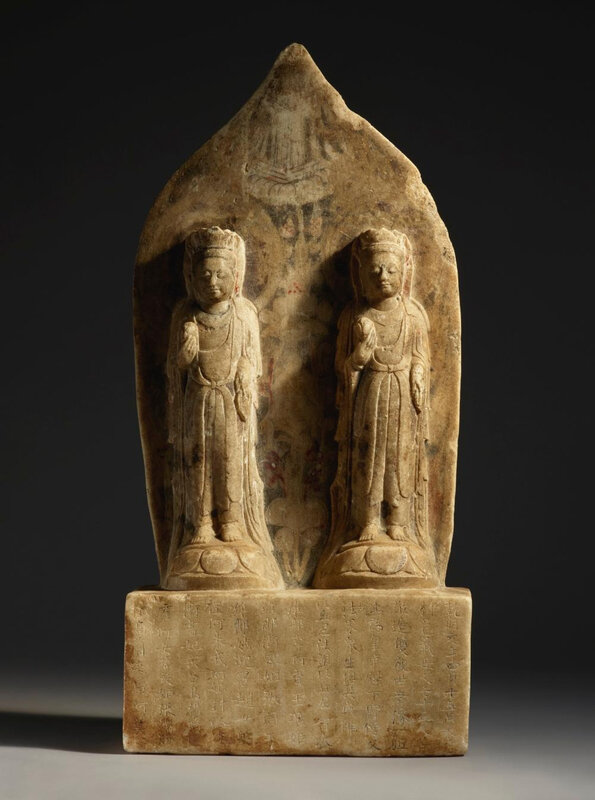 carved with twin Avalokiteshvara standing side by side in similar poses, each holding a flower bud in the raised proper right hand, wearing a diadem with ribbons hanging down over the shoulders, the robes festooned with numerous sashes crossed over the body and skirt, the bodhisattvas standing barefoot on domed lotus-pedestal bases, backed by a tall peaked mandorla, polychrome painted with halos behind the heads, large flowers between the figures leading up to a white stupa near the apex, the whole supported by the rectangular base, inscribed to each side with a dedicatory inscription and dated the first year of the Qianming period, corresponding to 560.

Note: This rare stele displays the major artistic developments of the Northern Qi dynasty, one of the most vibrant periods in the history of Chinese lapidary, when carvers began incorporating a heightened awareness of the human body in their works. The rounded contours clothed in lightweight robes evidence this first attempt at naturalism and mark an important shift from the linearity of the preceding Northern Wei dynasty. Furthermore, this stele is particularly rare for its well-preserved painting, which provides a glimpse of its original splendor.

The collapse of the Wei dynasty and resultant split of China into the Northern Qi (550-577) dynasty in the east and the Northern Zhou (557-581) dynasty in the west, had a profound influence on Buddhist doctrine and art in China. While the Gandharan and Mathuran schools of Kushan India had influenced the art of the Northern Wei, Northern Qi carvers turned to the sensuous sculptures of the Gupta School for inspiration. This approach to the human body is best displayed in the sculptures of the Northern and Southern Xiantangshan caves, situated between Henan and Hebei, close to the capital Ye, and in votive steles such as the present. These sculptures feature rounder figures dressed with unobtrusive elegant robes, lacking the heavy folds of drapery of the preceding dynasty, and a naturalistic approach to the rendering of facial expressions.

The artistic shift coincided with the continued popularity of the Lotus Sutra (Saddharmapundarika sutra or Sutra of the Lotus of the True Dharma), and the increased circulation of the Candragarbha Sutra, which dictated the iconography of Buddhist art. A characteristic motif seen on stele of this period is the flying stupa, which likely refers to one of two passages from the Lotus Sutra. A key episode is the appearance of a stupa in the sky to commemorate the miraculous meeting of the Historical Buddha, Shakyamuni and the Buddha of the Past, Prabhutaratna (see J. Leroy Davidson, The Lotus Sutra in Chinese Art. A Study in Buddhist Art of the Year 1000, New Haven, 1954, p. 5). A stupa floating in the sky also appears in Chapter XI, where Shakyamuni  explains that it is inhabited by a Buddha of the distant past, who vowed before reaching nirvana to appear in a stupa when the Lotus Sutra was proclaimed, thus bearing witness to its authenticity (see Michael Pye, Skilful Means. A Concept in Mahayana Buddhism, London, 2005, p. 69).

The turbulent years that followed the fall of the Han and of the Northern Wei dynasties, as well as a series of historical events including the persecution of Buddhists in the mid-5th century, encouraged support for the teachings of the Candragarbha Sutra. Through the doctrine of the ‘Latter Days of the Law’ (Mo Fa), this sutra prophesized the end of Buddhism. Angela F. Howard in ‘Buddhist Cave Sculptures of the Northern Qi Dynasty: Shaping a New Style, Formulating New Iconographies’, Archives of Asian Art, vol. 49, 1996, p. 10, proposes that the prolific representations of stupas on stone, ‘may have represented the yearning of the believers to defend themselves from this impending disaster’.

The present stele has much in common with stele from the Northern Qi period discovered at the site of the Xiude Temple in Quyang county, Hebei province, where over 2,200 sculptures prroduced between the Northern Wei and the Tang period were excavated. This group was first discussed by Yang Boda in ‘Quyang Xiude si chutu jinian zaoxiang de yishu fengge yu tezhan’, Gugong bowuyuan yuankan, vol. 2, 1960, pp 43-60, and was recently published in Compendium of Collections in the Palace Museum. Sculpture, vol. 7, Beijing, 2011, where six stele carved with two standing bodhisattva against a large mandorla are illustrated, pls 129-134. Those figures’ subtle forward bend, the rendering of their robes tied at the waist with a knot, and their headdresses are very similar to the present example. Stele from this group, of which more than 100 are inscribed with Northern Qi reign names, are carved from a related cream-colored marble found exclusively in Quyang, Hebei province, which enjoyed particular popularity in this period.