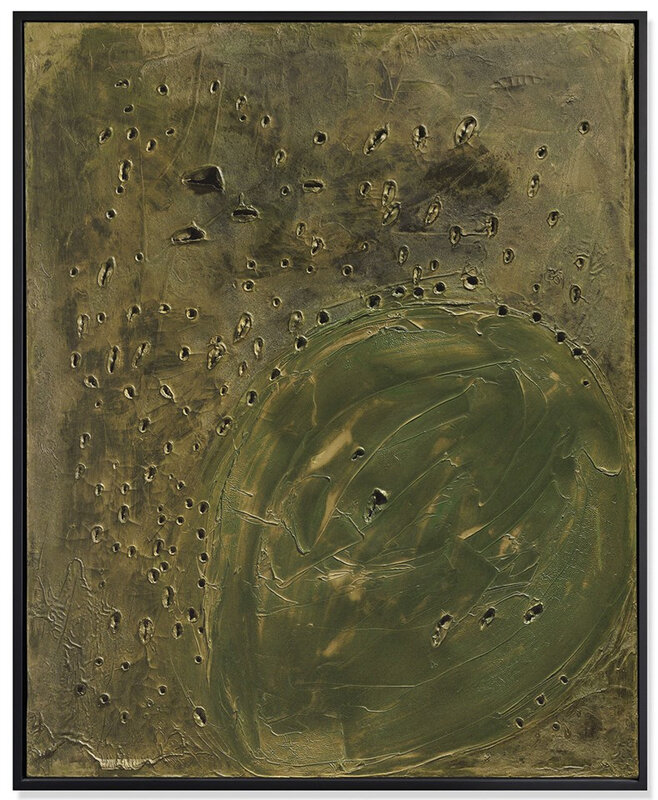 Note: Born in London, and raised in Italy, Luca Folco was introduced to art at an early age. His parents were dedicated patrons of the arts, assembling an exceptional collection of works by post-war Italian and Arte Povera masters. They particularly admired the work of Lucio Fontana and Alberto Burri, as well as Piero Manzoni and Enrico Castellani. Over the years, the collection has regularly loaned works to exhibitions, most notably the Solomon R. Guggenheim Museum’s Burri retrospective in 2016. Under Luca’s stewardship, its holdings have expanded to explore contemporary international movements: paintings by American pioneers such as Andy Warhol, Roy Lichtenstein and Keith Haring sit alongside works by contemporary Japanese artists, offering a rich counterpoint to the collection’s European core. At its heart, however, remains an enduring passion for Italian art, informed by a deep understanding of its achievements. Christie’s is delighted to present an outstanding work by Fontana: a technically innovative painting from 1960 that embodies the connoisseurial spirit of the Folco Collection.

‘Man must free himself completely from the earth, only then will the direction that he will take in the future become clear’ –Lucio Fontana.

With its shimmering burnished surface and constellation of punctured holes, Lucio Fontana’s Concetto Spaziale is a prophetic work that witnesses an important period of technical experimentation in his oeuvre. Painted in 1960 – the year that saw his international reputation consolidated – the work demonstrates the adoption of stereatic-acrylic resin as a solution to the challenges posed by his olii (‘oils’). Frustrated by the slow-drying properties of oil paint, which inhibited the act of piercing the canvas, Fontana sought out a new fast-drying medium that would lend his surfaces a new degree of plasticity. In the present work, swirling passages of metallic green and brown are layered with subtle hints of gold, creating rich chiaroscuro lighting effects. In this regard, it forms a crucial link with his landmark Venezie (‘Venice’) paintings, commenced the following year, which would continue to explore the properties of acrylic to spectacular optical effect. The ovular void at the centre of the present work may also be seen to foreshadow Fontana’s ground-breaking cycle La Fine di Dio (‘The End of God’), which comprised vast egg-shaped canvases strewn with his signature buchi (‘holes’). In 1961, Yuri Gagarin would become the first man to orbit the Earth from space, thus lending the elliptical vortex a newly visionary dimension. Anticipating some of the artist’s most important achievements, the work confronts the viewer like an uncharted planetary terrain, alive with rippling energy and scorched by the heat of the sun.

Working at the height of the Space Age, Fontana sought an art form that would correspond to the scientific advancements of his day. By perforating the canvas, he aspired to open up new territories beyond its sacrosanct surface, invoking the infinity of the cosmos. There would be no more painting or sculpture, he claimed, but rather ‘concetti spaziali’ (‘spatial concepts’): inter-dimensional objects that gave form to time, space, light and movement. The buchi were the earliest manifestations of this approach, unifying the temporal act of piercing the canvas with the revelation of the space behind it. The subsequent tagli (‘cuts’) distilled this gesture to a series of elegant, minimal slashes. The olii, initiated in 1957, brought about a renewed focus on the buchi, matching the raw violence of the holes with intuitive, primordial streaks of pigment. However, as Luca Massimo Barbero explains, ‘The gesture, the cut and the hole were “endangered” by the sagging of the medium, by the oil colour remaining liquid inside and changing shape in ways the artist could not control. New paint mediums … were a solution to these defects, and challenged him to create new effects that exploited the medium. Fontana found in these lavishly painted canvases, in the thick and pliable impasto with its metallic and artificially qualities, spatial depths, the novelty of gestural furrows of paint, and broad zones of colour’ (L. Massimo Barbero, ‘Lucio Fontana: Venice/New York’, in Lucio Fontana: Venice/New York, exh. cat., Peggy Guggenheim Collection, Venice, 2006, p. 26). Fontana was particularly enraptured by the near-metallic sheen produced his acrylic substance. This quality, already evident in the present work, would be exploited to full effect in the Venezie, evoking the play of light across the city’s gleaming Baroque architecture.