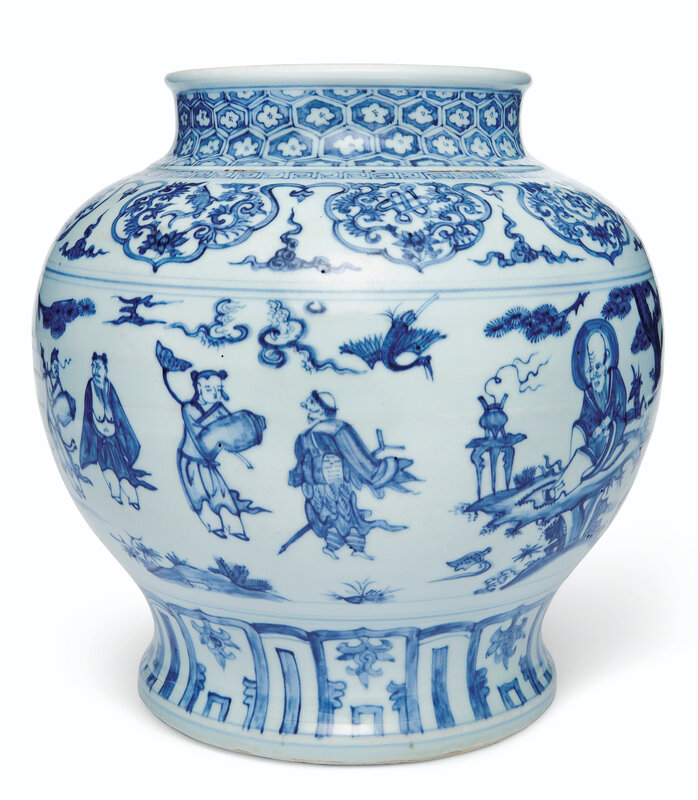 The globular jar has a slightly flared mouth and splayed foot, and is finely decorated with the Eight Daoist Immortals (baxian) amidst trees and rocks, between a band of ruyiheads enclosing Eight Buddhist Emblems (anbaxian) on the shoulder and a band of petal lappets above the base, all below trellis pattern on the neck, Japanese wood box.

Note: The present jar is related to a group of large blue and white jars and meiping of fifteenth-sixteenth century date, painted in a style commonly referred to as 'windswept', depicting scenes of figures in landscapes or garden settings which are taken from traditional literature and popular drama. The panoramic landscape scene is comparable to handscroll paintings of the early Ming period.

A comparable jar, shown with cover, decorated with the Eight Immortals as well as figures playing weiqi, is illustrated in Panoramic Views of Chinese Patterns, Tokyo, 1985, no. 50. Two other jars painted in the 'windswept' style, but without the incorporation of the Eight Immortals, are illustrated in Sekai Toji Zenshu, vol. 14, Tokyo, 1976, nos. 35 and 36. The form, as well as the decorative design seen on the present jar is perhaps more reminiscent of fahua jars dating to the fifteenth-sixteenth centuries, such as the fahua jar from the E. T. Chow Collection, decorated with the Eight Immortals, with similar lappet band at the foot and ruyi-form cartouches on the shoulder, sold at Christie's Hong Kong, 1 December 2010, lot 3118.