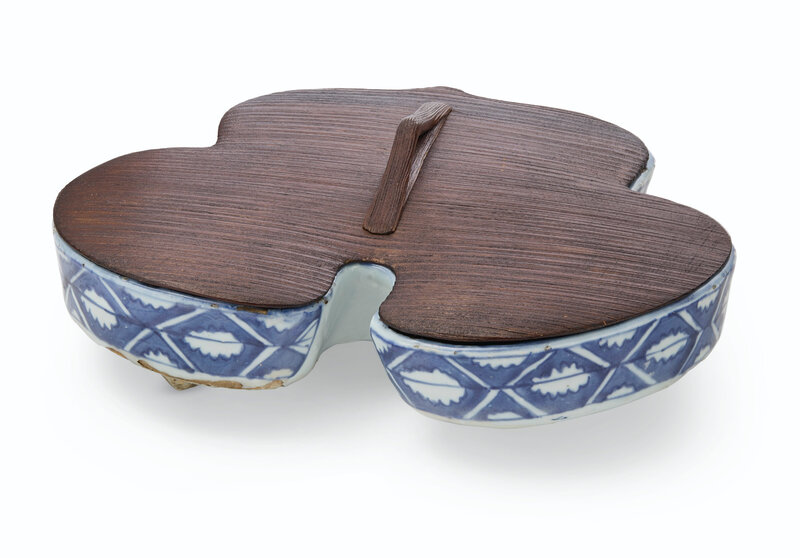 The ruyi-form, shallow tray is raised on three low loop-form feet, the interior decorated with a monkey stealing some fruit from a peach tree, and a four-clawed dragon descending amidst thick clouds. The sides on the exterior are decorated with a large diaper ground, wood cover and carved black and red lacquer cover, Japanese wood box. Together with the catalogues from the Tokyo Bijutsu Club, 1918. label on paper cover of box

Note: The present tray is exceptionally rare, and very few related examples appear to have been published: one example was donated by Roy Leventritt to the Asian Art Museum, San Francisco, and was included in an exhibition at China Institute, New York, and illustrated in the accompanying catalogue, Trade Taste and Transformation. Jingdezhen Porcelain for Japan 1620-1645, New York, 2006, pp. 52-53, no. 21 (the same tray is also illustrated by S. Kikutaro, Kosometsuke [Ancient Blue and White Porcelain], Tokyo, 1962, no. 26). Another example is illustrated in Tokyo National Museum. Masterpieces of Chinese Ceramics. The Yokogawa Tamisuke Collection, Tokyo, 2012, p. 094, no. 74; a third is illustrated by S. Yamaguchi and K. Yoshikawa, The Y.Y Collection. Rediscovering Nagasaki, Nagasaki, 2014, p. 10 and front cover; and a fourth is illustrated by K. Hayashi, Kosometsuke (Ancient Blue and White Porcelain), Sekido Museum of Art, Tokyo, 2017, p. 82, no. 26.

All these comparable trays illustrate the same scene of a monkey stealing a peach from a tree, while a dragon flies through clouds. The painting style and composition of the Yokogawa Tamisuke example is particularly close to that on the present tray. It is also noteworthy that the comparable examples do not appear to be accompanied by a carved lacquer cover, unlike the present tray.

The comparable examples are, however, all inscribed with the same poem, reading fei long zai tian, hua yuan yu tao (‘Flying dragon in the sky transforms the monkey near the peach tree’). This inscription probably refers to an episode in the late Ming popular novel Journey to the West, in which the trouble-maker Monkey King steals peaches from the tree of immortality, and thus incurs the displeasure of Huangdi, the Lord of Heaven and Earth, here represented as a dragon. Alternatively, the dragon may represent Aoguang Longwang, the Dragon King of the Eastern Sea, from whom the Monkey King acquired his magic wand.

The present tray is distinguished by its association with one of the powerful clans of Edo-period Japan. The box bears an inscription indicating that the tray was once in the collection of Narinobu Tokugawa (1797-1829), the eighth successive daimyo of Mito, an area in Ibaraki Prefecture. The Mito branch was one of the ‘three honorable houses’ of the Tokugawa family, who maintained considerable influence throughout the Edo period. Even as a youth, Narinobu Tokugawa was considered to be wise, excelling in literary and artistic matters, and he was also an avid collector.

The present tray is documented as early as 1918, when it was illustrated in the catalogue of a sale held at the Tokyo Bijutsu Club, consisting of property from the collection of the Duke of Tokugawa. It is embellished with two covers, of which the carved lacquer cover was also illustrated in the 1918 sale catalogue. The inscription on the box also mentions that the carved lacquer cover is intended for use with the tray as jikirou, or a food vessel, and the plainer cover is for use with the tray as part of a kaiseki food course. Fig.1 The present tray and lacquer cover as illustrated in Auction for property from the collection of the Duke of Tokugawa,
Tokyo Bijutsu Club, 1918.