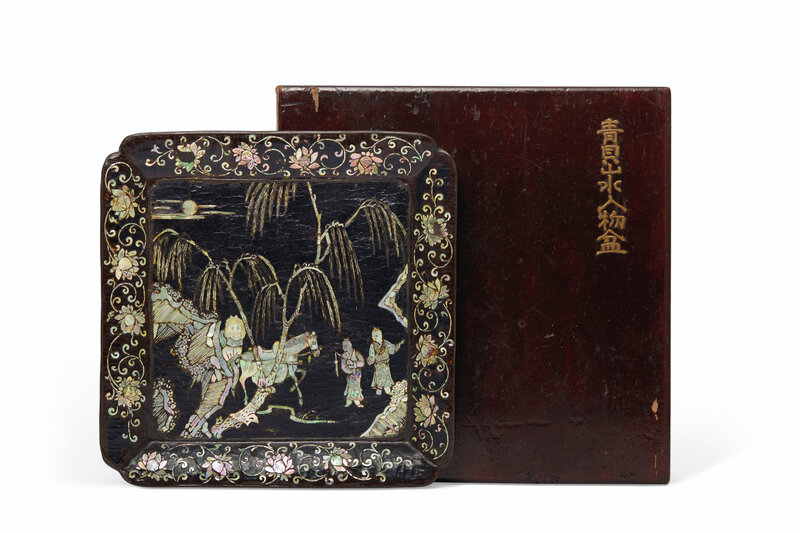 The dish has chamfered corners and is finely inlaid with mother-of-pearl in the recessed center with a scene of two horses behind a willow tree and rocky outcrop walking toward two attendants. The cavetto is decorated with continuous lotus scroll, and the reverse is lacquered black, silk pouch, Japanese lacquered wood box.

Literature: Eskenazi Ltd., Chinese Lacquer from the Jean-Pierre Dubosc Collection and others, London, 1992, no. 13.

Note: The relatively freely-arranged lotus scroll depicted on the border of the present dish can be compared to the floral scrolls seen on fourteenth century blue and white porcelain dishes. Floral scrolls on lacquer dishes of this type, but of later periods, are typically denser and more formally arranged.

A lacquer dish with related lotus scroll, dated to the 14th century, is illustrated by Tokyo National Museum in Chu¯goku No Raden (Mother of Pearl inlay in Chinese lacquer art), Tokyo, 1981, no. 29.

See, also, a lacquer box dated to the Yuan dynasty, decorated with a more elongated flower scroll but with a similarly free positioning of the flower heads, illustrated by G. Kuwayama in Far Eastern Lacquer, Los Angeles, 1982, p. 68, no. 13.