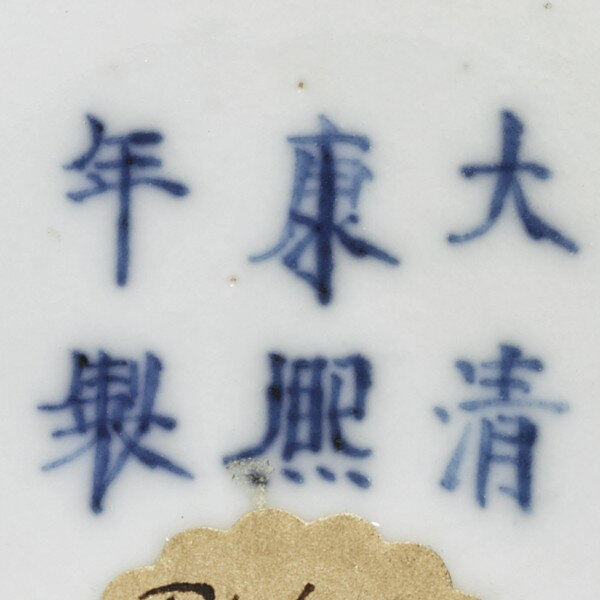 exquisitely potted, the elegant ovoid body tapering to a short, slightly convex foot rim, the lower section encircled by a row of slender, upright chrysanthemum petals, molded and incised in low relief, swelling to a tall, cylindrical neck and flaring rim, applied overall with a vitreous and lush dusty-rose colored glaze with blush-red flecking, the interior mottled with pale to bright green speckles, the rim and base reserved in white, the base inscribed with a six-character mark in underglaze-blue.

Note: ‘Peachbloom’, the evocative term familiar to Western dealers and collectors in the early 19th century, rocketed to celebrity status in 1886 when William T. Walters (1820-1894), whose collection initiated the founding of the Walters Art Museum in Baltimore, purchased a ‘peach blow or crushed strawberry color vase’ from the estate of Mary Morgan for the astronomical sum of $18,000. The vase reportedly was part of the Qing Court Collection having once been owned by the first Prince Yi (1686-1730), the thirteenth son of the Kangxi emperor, and subsequently passed down in the family before reaching its 19th century owner. The impressive result of the sale was widely reported, garnering numerous articles and even a poetic parody in the New York Times. In an article entitled ‘High Priced Bric-a-Brac; Sale of Curios in Mrs. Mary Morgan’s Collection, The Famous Peachblow Vase Sells for $18,000', New York Times, 9th March 1886, it was recorded, 'Its peculiar color, that of a peach blossom, was a perfect reproduction of that peculiar tint which is so difficult to obtain. It was this feature which set collectors to raving…'.

Stephen Bushell, the scholar who advised Mr. Walters, describes the glaze and some of its associated terminology in Oriental Ceramic Art: Illustrated Examples from the Collection of W. T. Walters, 1899, New York, 1981 where he comments that he prefers the expression ‘peach bloom' to ‘peach blow’, ‘because the latter is only applicable to the flower and the former corresponds to the peau de peche’ (p.163). The many beguiling Chinese names to more accurately describe the range of tonality achieved by glaze range from ‘bean red’, ‘apple-red’, ‘apple green’, ‘beauty's blush’ and ‘baby's face’, to the gray end of the spectrum, including ‘baby-mouse skin’ and ’horse's lung’.

The rightfully acclaimed glaze, a lustrous, copper-red flecked with pale green was notoriously difficult to achieve due to the temperamental nature of the copper pigment. The attractive glaze is found only on a small group of vessels for the scholar's table and is one of the most iconic groups of porcelain created under the Kangxi Emperor. The group is considered to include eight forms; three types of waterpots, a seal paste box and cover and four vases of differing form, among which is exemplified by the present example. A complete set of which is in the Metropolitan Museum of Art, New York, illustrated in Oriental Ceramics. The World's Great Collections, vol. 2, Tokyo, 1982, col. pl. 28.

Copper-red glazes had been largely abandoned at Jingdezhen since the early Ming dynasty and were revived and drastically improved only during the Kangxi reign. Recent research by Peter Lam and other leading scholars indicate that the famous 'peachbloom' group was produced during the early years of the Kangxi period under the supervision of the skilled Zang Yingxuan, who was sent to Jingdezhen in 1681 to oversee the rebuilding of the kilns and serve as imperial supervisor. To manage the fugitive copper-lime pigment, it is believed to have been sprayed via a long bamboo tube onto a layer of transparent glaze and then fixed with another layer, so as to be sandwiched between two layers of clear glaze. The spotted green flecking, referred to as pingguo qing 'apple green', is possible through a technique using varied concentrations of copper that, when exposed during firing, oxidize to form green spots and modulation.

The vase comes from one of the grandest art collections in New York City in the early 20th century. Mae Caldwell Manwaring Plant Hayward Rovensky was one of the most prominent society figures of her day. Mrs. Rovensky was first married to Seldon B. Manwaring whom she divorced in 1914. One month later she married Morton Freeman Plant, a railroad and steamship magnate. The Fifth Avenue mansion she shared with Morton Plant gained renown in 1918 when Mr. Plant traded it to the jeweler Cartier in exchange for a pearl necklace for his wife and the building remains the New York showroom for Cartier today. Upon his death in 1918, Mrs. Plant was one of the wealthiest women in America. In 1919 she married Colonel. William Hayward, United States District Attorney for the Southern Region of New York. Col. Hayward had won considerable recognition for his prosecutions during the early years of the Prohibition era. In 1954 she married John Edward Rovensky, a banking and financial leader. When she died two years later at her home, Clasendon Court in Newport, Rhode Island, her will instructed that $6,000,000 be given to charities of his choosing but in her name. Among the recipients, the Wadsworth Athenaeum was given this vase in her memory. Rovensky also auctioned off a large part of her collection. This significant event was held at Parke-Bernet Galleries, New York, 'The Art Collection of the Late Mrs. John E. Rovensky (Formerly Mrs. Morton F. Plant)' from 15th-19th January, 1957, and offered major works of art in multiple collecting areas.