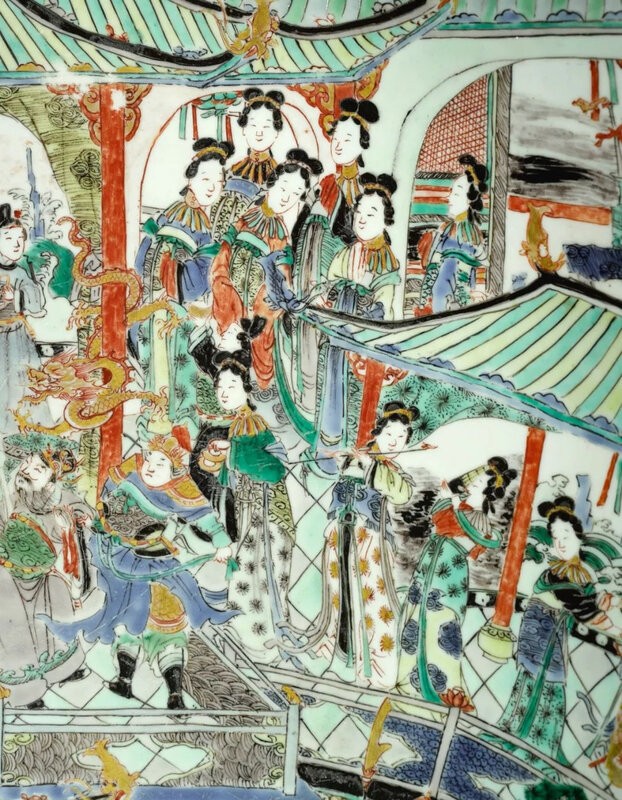 lavishly enameled and gilt, the entire surface depicting a vivid scene from the novel Romance of Sui and Tang, with Emperor Yang of Sui centrally seated before an array of dishes, flanked by attendants and enjoying the graceful dancing of a courtesan moving to the rhythms of numerous female musicians, all amid an extravagant court setting replete with elegantly attired ladies, imposing armored guards, imperial décor such as the auspicious figural sculptures of the lion and elephant flanking the stairs, and resplendent architecture including ornate columns and the imposing sweep of the tiled roofs, the reverse brightly decorated with four pairs of confronting storks in flight above cresting waves crashing against pyramidal rockwork, the base with a zhi mark in underglaze blue within a double circle, coll. no. 1343.

Feast or Famine: A Morality Tale

This resplendent depiction of a lavish banquet for one constitutes a warning of the dangers of imperial decadence. Yibin Ni has identified the present dish as most likely representing a scene from the historical novel Romance of the Sui and Tang Dynasties by Chu Renhuo (c. 1635) which describes the downfall of the Sui and the rise of the Tang. One of the most memorable villains of the story is the second Sui emperor, Yangdi (r. 604-617), whose opulence and decadence is well documented.  His later years were marked by excess. Despite protests, and ignoring the advice of his ministers, he indulged his every whim, surrounding himself with beautiful women and splendor. Ann Paludan in her book, Chronicle of the Chinese Emperors, London, 1998, p. 87, notes that he maintained three capitals, the second of which, Luoyang, he ordered rebuilt with ‘huge artificial lakes with pavilion-studded islands’, and a pleasure park which ‘when he rode there in winter the bare branches were decked with silk flowers and leaves’. Emperor Yang also launched costly military campaigns, including three failed attempts to conquer Goguryeo, a kingdom of Korea, which eventually led to the collapse of the Sui dynasty.  Profligate spending and botched foreign affairs created the vulnerability that allowed the ascent of the Tang dynasty. Emperor Yang of Sui was quickly vilified and relegated to history as a cautionary tale of lapsed ethics and loss. Similar to the famous legends surrounding the last emperor of the Shang dynasty, Emperor Yang of Sui proved himself unworthy of the ‘Mandate of Heaven’ and Li Yuan, Emperor Gaozu of the Tang dynasty, became the rightful ruler of China.

Themes involving dynastic change and the ‘Mandate of Heaven’ resonated strongly in the early years of the Qing dynasty. As a young leader of a newly established dynasty, the Kangxi emperor was acutely aware of the importance of consolidating his right to rule. There remained considerable unrest in the country and it was not until 1681, when the Revolt of the Three Feudatories was finally quashed, that the emperor could focus completely onovelsn establishing his reign. The years of social and political upheaval found expression in the arts which, in paintings, poetry, plays and , sought to both reassure and navigate the transition of power with themes promoting Confucian ideals of loyalty and duty. The most popular imagery from these works was quickly adapted to the decorative arts, carved into lacquer or painted onto porcelains such as the present dish. Historical novels enjoyed great popularity in the 17th century largely due to the ease of printing which broadened readership substantially. Additionally, many of most popular stories were adapted to the stage reaching an even larger audience. The novel Romance of the Sui and Tang Dynasties was widely read in the 17th century and the subject matter depicted on the present dish would have not only been recognizable to the contemporaneous viewer but understood as a morality tale as well.

The depiction of an elaborate banquet scene for the lascivious Emperor Yang of Sui would have been appreciated not only for its wealth of color and extravagant detail but also as a commentary on the misuse of a valued traditional event. Imperial banquets had played an important role in Chinese diplomacy since the earliest days of the empire. Festivals, birthdays, visiting dignitaries and important occasions were all honored with banquets, each meticulously planned in order to best signal the occasion and achieve the results expected by the emperor. These were lavish affairs designed to impress and reflect the glory of the empire. The imperial kitchen would have been bustling with chefs creating over three hundred dishes for the fortunate guests to try. The Kangxi emperor was quick to embrace this dazzling form of entertainment. He hosted banquets as a means to secure loyalty from potential adversaries by lavishing attention upon them and occasionally conferring titles as well. Numerous wedding banquets were held for Manchu princesses being married to Mongolian princes. Through these marriages, Mongol tribes were pacified allowing the Kangxi emperor to significantly expand the empire. By continuing the practice of large formal banquets, the Kangxi emperor not only showed respect for conventional Confucian practices, but also demonstrated a creative ability to adapt the tradition in order to strengthen the legitimacy of his reign and dynasty.  Striving to prove himself worthy of the throne, the Kangxi emperor, unlike Emperor Yang of Sui, was exceedingly mindful of using extravagant banquets to serve the good of the empire.

This spectacular dish belongs to a distinguished group of large and finely painted historically inspired depictions of legendary imperial gatherings. Only three other dishes compare closely to the present example: one sold at Christie's Paris, 12th December 2018, lot 162; another sold in our Paris rooms, 12th December 2017, lot 77; and a third, formerly in the collection of The Hon. Mrs. Nellie Ionides, sold in our London rooms, 19th June 2002, lot 128. Four other related examples are known and represent a close variant within this rare group of dishes that feature a warrior holding a large bronze ding; one from  the collection of Flora Whitney Miller, sold in our New York rooms, 11th April 1987, lot 199, and again our London rooms, 19th June 2002, lot 127; another, formerly in the collection of Dr. C. M. Franzero was exhibited by Bluett's in Chinese Porcelain of the 16th to 18th Centuries from the Collection of Fr. C. M. Franzero, Bluett & Sons Ltd., London, 1974, cat no. 37; a third is in the Hermitage Museum, St. Petersburg, and illustrated in Tatiana B. Arapova, Chinese Porcelains in the Hermitage Collection, Leningrad, 1977, pl. 76; the fourth, bearing a Chenghua mark, in the Palace Museum, Beijing is illustrated in The Complete Collection of Treasures in the Palace Museum, Porcelains in Polychrome and Contrasting Colours, Hong Kong, 1999, pl. 97. Furthermore, the contemporaneous admiration for this group appears to have been sufficient to encourage the production of related wares of similar large size, but with the central imagery set within decorative borders. An example of this type is in the Chinese Museum at Château de Fontainebleau, and was among the porcelains and works of art presented to the Empress Eugenie by French troops in 1860.

The zhi mark inscribed on the base of the present dish appears on most other examples of this type. The mark, like the apocryphal Chenghua mark reproduced during this period, has been linked to porcelains made for imperial use. The use of this mark, in conjunction with the subject matter of these dishes replete with historical references and sumptuous reflections of imperial might, strongly suggests that they were destined for the imperial household.