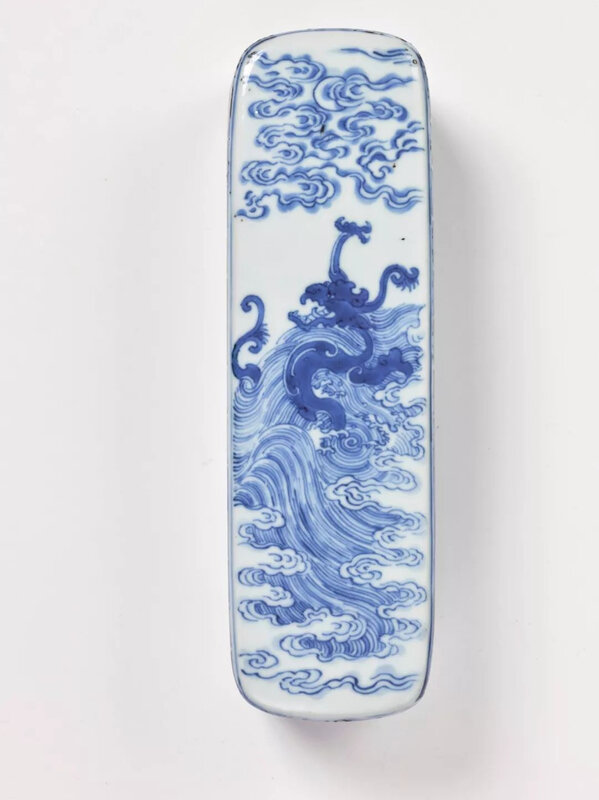 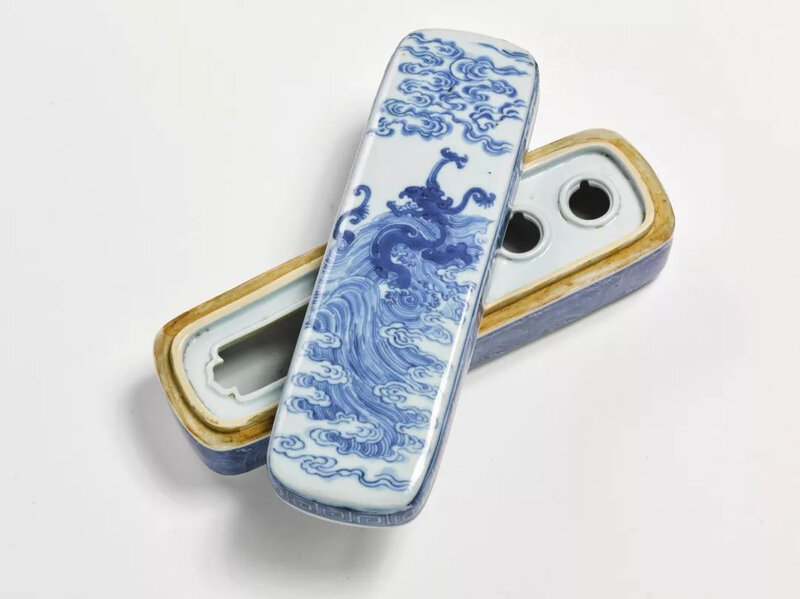 of oblong form, the flat cover painted with a sinuous, writhing dragon emerging from roiling and cresting waves with scudding skies overhead, all encircled on the side with a crisp leiwen border, the box painted on the exterior with an elegant archaistic band of boldly interlaced scrollwork, the interior with three circular and one shaped oblong compartments, all raised on a channeled unglazed foot (2), coll. no. 1450.

Note: The present elongated form with rounded ends is modeled after an Islamic metal prototype known from the 13th century, which was often richly chased and inlaid with gold and silver. Originally closely modeled after an Islamic form, the shape gradually changed to suit the requirements of Chinese calligraphers. Furthermore, decoration on pen boxes included motifs that conveyed auspicious messages, such as the aspirational dragon motif seen on the present example. Chinese porcelain interpretations of the form were first made with underglaze-blue decoration at the imperial kilns in Jingdezhen during the early Ming dynasty and continued to be popular well into the Qing dynasty.

Kangxi period examples of blue and white pen boxes are extremely rare and it appears that no other published example is known. Kangxi period pen boxes with overglaze decoration are known and include a green-ground example from the Qing Court Collection illustrated in The Complete Collection of Treasures of the Palace Museum, Miscellaneous Enamelled Porcelains Plain Tricoloured Porcelains, Hong Kong, 2009, pl. 217, and a yellow-ground example with phoenix also the Palace Museum, Beijing illustrated in Kangxi, Yongzheng and Qianlong, Qing Porcelain from the Palace Museum, Hong Kong, 1989, pl. 102. A white-ground example with dragon motif from the collection of Sir Alfred Beit was sold in our London rooms, 6th November 2013, lot 86. A green-ground famille-verte on biscuit pen pox and cover with dragon decoration and also from the Jie Rui Tang Collection was sold in these rooms, 20th March 2018, lot 351. See also a related example, a Qianlong mark and period blue and white pen box and cover sold in our Hong Kong rooms, 30th November 2017, lot 324.