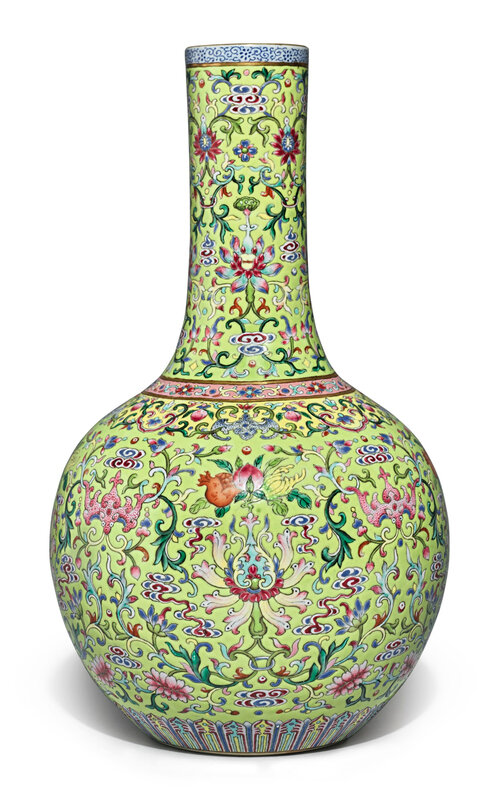 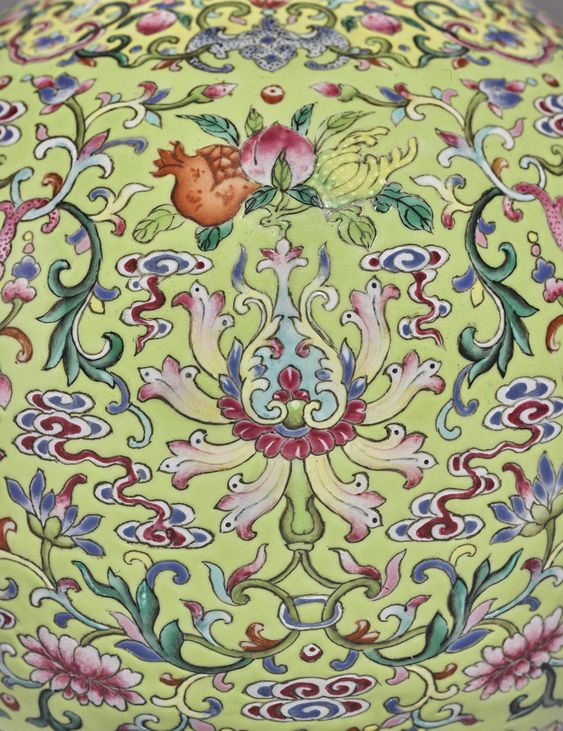 the spherical body rising to a tall cylindrical neck, densely painted in bright and colorful enamels, the body decorated with large lotus blossoms below the 'three abundances' flanked by bats entwined with colorful foliate scrolls amidst cloud wisps, a yellow-ground collar of alternating ruyi and bats interspersed with peaches at the shoulder, the neck painted with further lotus scrolling and auspicious chimes and jewels, the mouth with a band of blue scrollwork between gilt-painted borders and the foot encircled with colorful lappets, the base enameled in turquoise and inscribed with a six-character seal mark in iron red.

Note: This vase is striking for its exquisite painting in vivid enamels, and represents one of the classic styles developed at the Imperial kilns in Jingdezhen. The complex and auspicious design is particularly successful. Flowers and leaves are skillfully shaded in pastel tones, leaves are harmoniously entwined with bats, and the three fruits are painted with the skin showing signs of ripening. The surface of the vase is entirely decorated, and the overall effect is of opulence and luxury. Vases of this type appear to have been in vogue at the Jiaqing court, despite the Emperor’s intention to appear frugal. As discussed in the catalogue to the exhibition Lord Jiaqing and the Journey to Taiwan, National Palace Museum, Taipei, 2016, p. 167, Jiaqing and his court ‘consciously played down the aspect of pleasure in art and instead sought to more closely associate court art with the ruler’s resolve to rule diligently’.

Despite the abdication of the Qianlong Emperor and enthronement of Jiaqing in 1796, Qianlong continued to control the administration of the court and influence state affairs until his death in 1799. His active influence is reflected in the production of imperial porcelain wares at the Imperial kilns in Jingdezhen, Jiangxi province, where forms and designs devised in the preceding reign, such as the present vase, continued to be made. These vases emulated the elegant and stylish creations developed at the Imperial Enamel Workshop in Beijing, but were equally influenced by luxurious textiles.

Vases belonging to this group share a number of features, including the iron-red seal mark. They are, however, known in a variety of shapes, with or without handles, and display subtle variations in their designs. The present piece is particularly unusual in its depiction of the sanduo (‘three abundances’) motif emerging from lotus pistils. A highly auspicious design, the pomegranate, peach and finger citron are symbolic of many sons, long life and blessings. The vase also features bats, which when painted upside down make the rebus ‘happiness is arriving’, and lingzhi, the immortality fungus, forming from lotuses at the neck.

Related auspicious motifs are also found on vases with other colored grounds; compare for example a yellow-ground vase of ovoid form, similarly painted with the lotus and lingzhi design at the neck, in the Huaihaitang Collection, included in the exhibition Ethereal Elegance. Porcelain Vases of the Imperial Qing, Art Museum, The Chinese University of Hong Kong, Hong Kong, 2007, cat. no. 135; and a turquoise-ground version sold at Christie’s Hong Kong, 30th October 1995, lot 763.

The motif of the ‘three abundances’ emerging from a lotus first appeared on Qianlong mark and period vases; see for example a globular vase painted on a turquoise-ground, illustrated in Taiji Shuichi, Shindai no Jiki/Porcelain of the Ch'ing Dynasty, Tokyo, 1976, pl. 55.