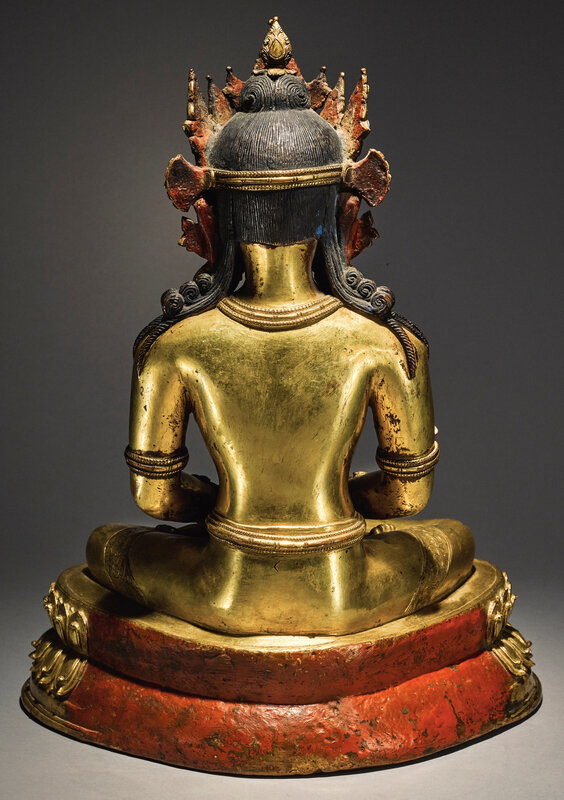 seated in vajrasana on a multi-petal double lotus base articulated with a beaded edge, his hands held in dhyana mudra, clad in a dhoti with an incised hem, decorated at ankles, wrists and upper arms with jeweled bangles, layered in necklaces and rounded earrings resting on his shoulders with precious stones, with a serene and composed expression framed by an ornamented five-pointed diadem crowning his head.

Note: This large and magnificent cast gilt figure of Amitayus, the Buddha of Infinite Life, is associated with the rites of ensuring long-life. Amitayus was popular in the Tibetan pantheon of deities, representing one of three long-life deities. As a worldly manifestation of the Buddha Amitabha, the Buddha of Infinite Light, Amitayus, is represented in the form of the bodhisattva-heavily clad in jewelry with silk attire and wearing a jeweled diadem. The bodhisattva is typically represented holding a kalasha, a ritual vase which is perpetually full of the ‘nectar of immortality', although in this instance, his ornamented implement is now missing.

This gilt Amitayus is the epitome of its type, showing near perfect casting and exceptional quality of form. There is a precision to the features, articulating a perfect balance of inward equanimity and outer presence. The soft calligraphic curve of the eyebrows which extend vertically through the bridge of the nose to its tip whose subtlety contrasts with the rectangular jeweled urna at the center of the forehead, all give form and weight to the lowered eyelids. As the lids gently curve outwards, revealing half opened eyes, the upturned slightly smiling lips ease any sense of complete inward retraction. The square face and shoulders, framed by ornate jewelry embedded with precious stones, and the delicacy of how the hands and feet are rendered with effortless pliability, convey the composure of timeless beauty while also highlighting the suppleness of the flesh.

The present sculpture was gifted to its current owner Mr. James George by Dudjom Rinpoche, Jikdral Yeshe Dorje (1904-1987), in 1971. A well-known scholar, yogin, meditation master as well as the appointed Supreme Head of the Nyingma School of Tibetan Buddhism by His Holiness the Dalai Lama, Dudjom Rinpoche traveled and taught extensively. He gave teachings in Tibet, India and Nepal and later in his life in the West, including the United States, United Kingdom and France.

For Mr. George, the ownership of this image was a means to practice spiritual teachings, which he imbibed from some of the most renowned adepts of his generation including His Holiness the Fourteenth Dalai Lama, Krishnamurti, Thomas Merton and Yogaswami. His personal life and work were deeply influenced by these ideas.