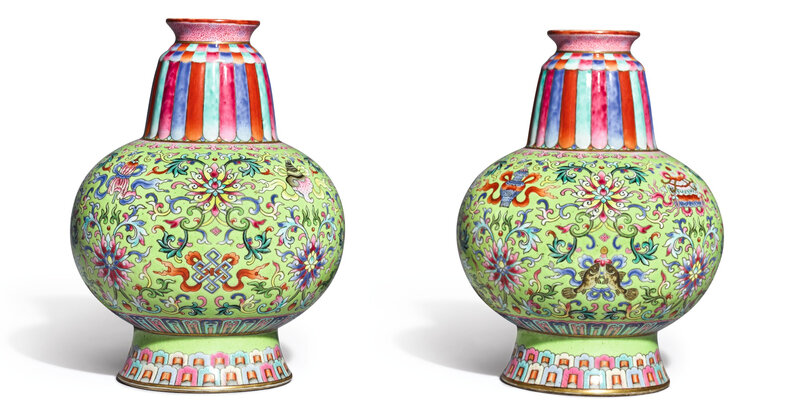 each with a spherical body supported on a tall splayed foot and surmounted by a conical fluted domed neck, the body exuberantly painted with the 'Eight Buddhist Emblems' interspersed with scrolling lotus blossoms against a bright lime-green ground, above bands of upright lappets encircling the lower body and foot, and below a border of pendent pink ruyi at the shoulder, the neck enameled with vertical bands of color below a pink-ground border of floral scrolls at the rim, all divided by gilt borders, the base enameled turquoise with a six-character seal mark in ironred, both vases missing their original disc-shaped mouths (2).

Note: In both form and design, these ritual vases are steeped in Tibetan Buddhist practice yet also represent the opulent Sino-Tibetan aesthetic developed to suit the taste of the Qing emperors.

The form is modeled after Tibetan metal prototypes known as bumpa. During rituals these vessels were used to hold sacred flowers or peacock feathers as they are believed to have the power to cleanse the heart of practitioners from evil. An emblem of Amitayus, these vases were also used during longevity rituals whereby the vase was filled with water that could be consecrated and transformed into an 'elixir of immortality' by practitioners who evoked the deity’s name. Bronze bumpaoften appear on contemporaneous paintings and thangka where they are covered in colorful brocaded cloths, which may have inspired the luxurious bajixiang ('Eight Buddhist Emblems') and lotus scroll design on this vase.

William Boyce Thompson (1869-1930) was an American mining engineer, financier, philanthropist and founder of Newmont Mining, today the world's second-largest producer of gold. Thompson visited Russia before the revolution, and again in 1918, just after the tumultuous uprising, where he served as a member of the American Red Cross relief mission that also hoped to encourage formation of a democratic government in Russia. During his lifetime, Thompson formed a significant collection of gems and minerals, which upon his death was largely gifted to the American Museum of Natural History, New York.