HONG KONG.- Sotheby’s Hong Kong will present Curiosity V on 2 April at the Hong Kong Convention and Exhibition Centre. In its fifth instalment, the sale offers an eclectic and thought-provoking assemblage of works ranging across time and geographical space, from Ice Age Siberia, to Bronze Age China, Ancient Egypt and Medieval Europe. Highlights include an important Neolithic jade cong from the Liangzhu culture formerly in the distinguished collection of Duan Fang (1861-1911); a monumental stucco Buddha head dating from the Liao dynasty in the 10th-12th century; a rare complete skeleton of a Pleistocene period mammoth; and a principal springer mullion from the south window of Canterbury Cathedral.

Nicolas Chow, Chairman, Sotheby’s Asia, International Head and Chairman, Chinese Works of Art, says, “In its fifth year, the Curiosity sale continues to provide collectors with a chance to acquire objects spanning millions of years, civilisations and continents. These marvels each have their own story to reveal and offer, individually and collectively, an opportunity to expand one’s imagination.” The creation of artefacts such as this jade at prehistoric times, when writing was not yet established and metal was not yet utilized, may be seen as one of the wonders of mankind. The advanced jade masterpieces Neolithic craftsmen fashioned with their primitive tools can hardly be admired enough. The Liangzhu culture, which is named after a village near Hangzhou in Zhejiang, flourished from the late 4th to the end of the 3rd millennium BC and has brought about a large variety of jade forms, foremost among them bi (discs) and cong. Cong remain among the most enigmatic objects of early Chinese cultures. Generally shaped as cylinders that are round on the inside and square on the outside, they can vary enormously in height and diameter, ranging from wide, shallow bracelets to tall, narrow tubes. Lianzhu cong are distinguished by finely engraved anthropomorphic or zoomorphic faces with highly stylized but distinctive features.

Bracelet-shaped cong like the present piece, also known as zhuo, appeared among the earliest Liangzhu jades and were apparently worn by both sexes. The faces on this piece are carved with the characteristic Liangzhu features of two prominent eyes, widening towards the temples and enclosing circular pupils, a narrow horizontal bar indicating the mouth, and two horizontal bands across the top, suggesting the forehead or hairline. Remarkable here are the extremely finely incised scroll bands also marvelled at by Duanfang in his inscription on the box of the piece, which are made up of hair-fine parallel lines. 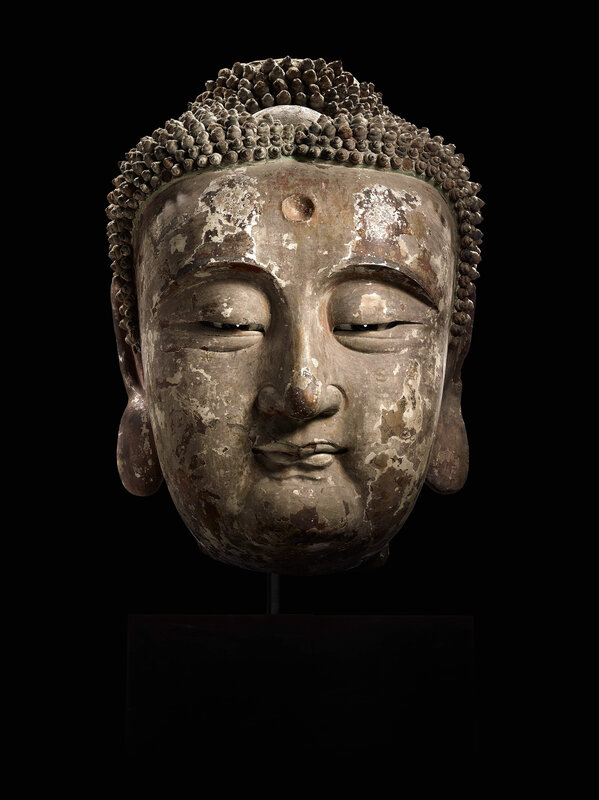 This colossal head of Shakyamuni Buddha is outstanding for its monumental size and powerful countenance. What is particularly remarkable about the head is that the interior is painted and attached with Buddhist sutras. The present head with its fine features and its fleshy lips recessed into rounded cheeks, its cheek bones only subtly indicated, and its head covered with even curls of hair, exudes a strong notion of calm and serenity and stands in the classic tradition of Liao Buddhist imagery. The technique used to create these sensitively modelled features is very similar to the seven large polychrome stucco sculptures at the Fengguo Temple, a Buddhist temple in Yixian, Liaoning Province – suggesting that this head may once have graced such a hall of an important Imperial temple. 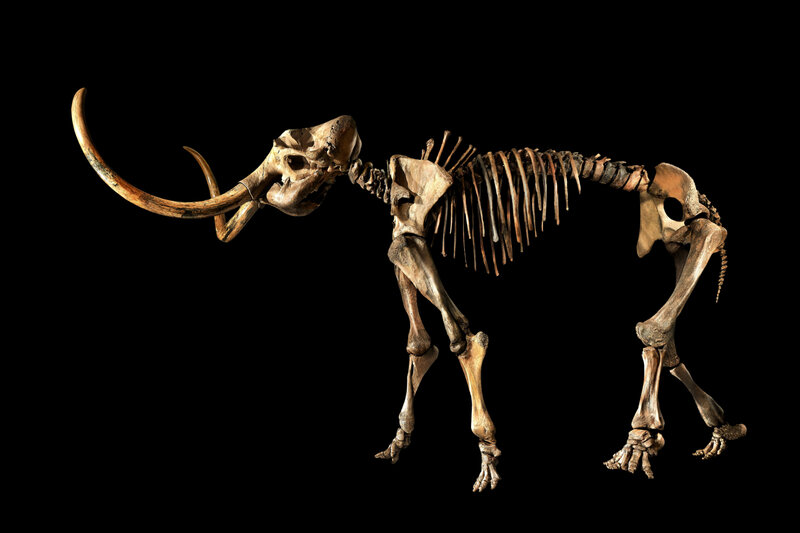 This monumental skeleton of an individual woolly mammoth is exceptionally preserved in its entirety. These species existed at the same period as the Neanderthal man, during the Middle Paleolithic period and as the Homo sapiens during the Upper Paleolithic Period, and until their extinction around 12,000 BC. Hunted by prehistoric man, the mammoth developed special teeth and defences to face the rigors of its ecosystem. Its long, curved tusks were used not only in self-defence but also for digging and scraping beneath the snow for food. These naturally formed tusks emerged at birth and continued to grow in an organic curve until the end of the animal’s life. This monumental section of carved stonework from the south window of Canterbury Cathedral is one of the most important pilgrimage sites in Europe. The stone for the window was quarried from Caen, France in 1428, and assembled in the 1430s, where it remained in situ until the restoration of the window between 2009 and 2013 necessitated their permanent removal. Separated from the building and brought down from their positions seventy feet above ground level, they can now be appreciated as statuesque forms of immense beauty, their springing, energetic mouldings transforming inanimate stone into dynamic constellations of light and shadow. 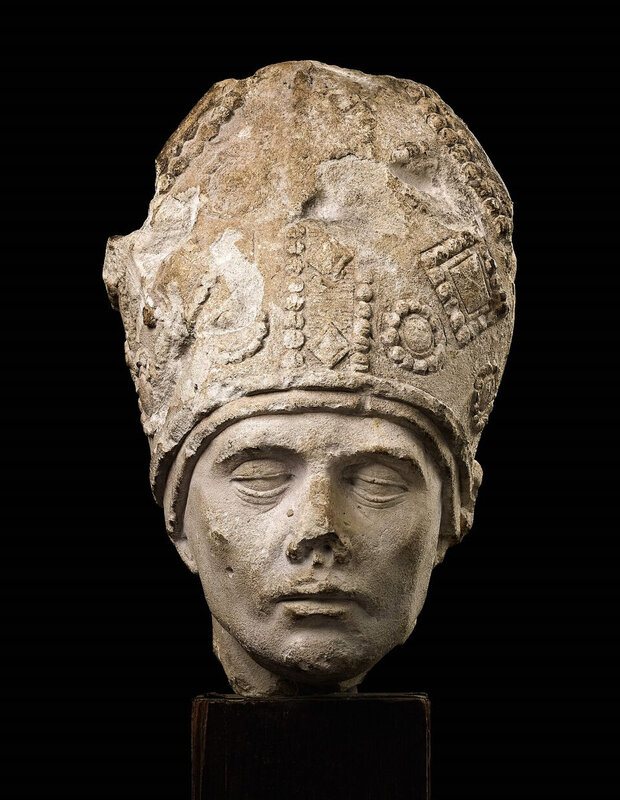 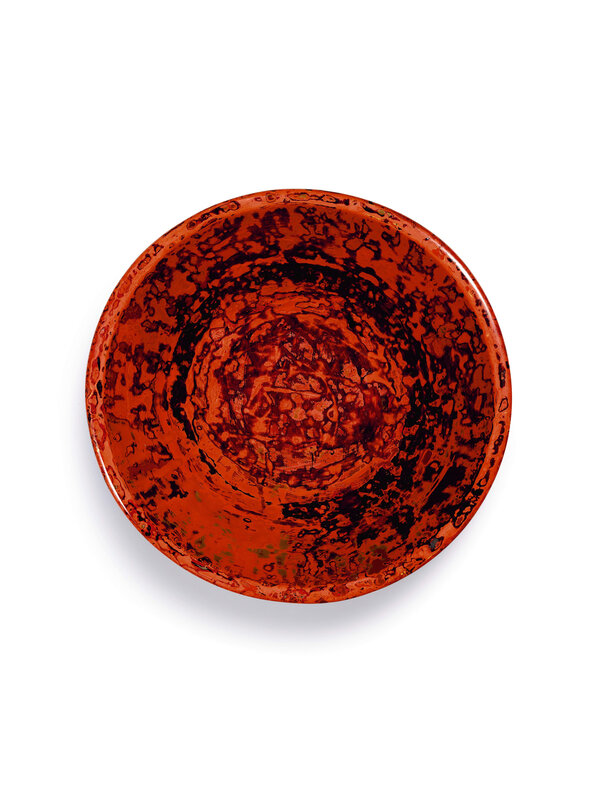 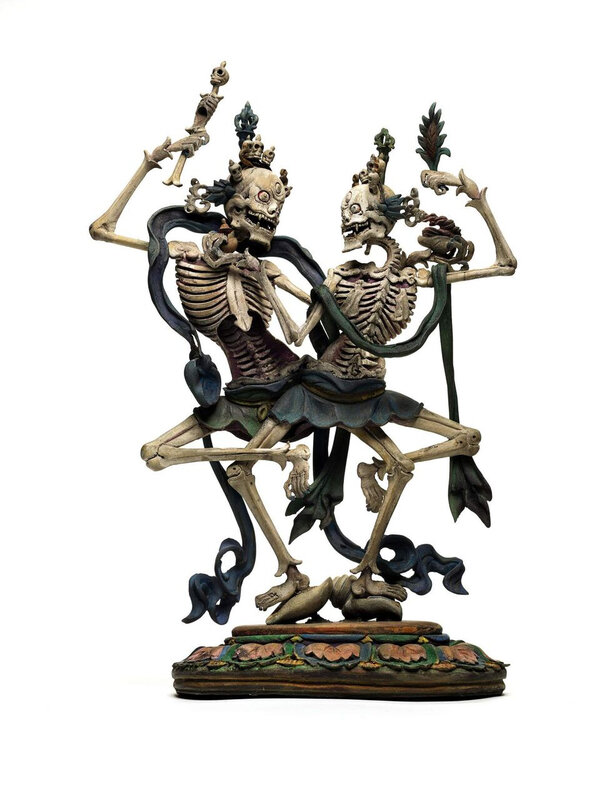 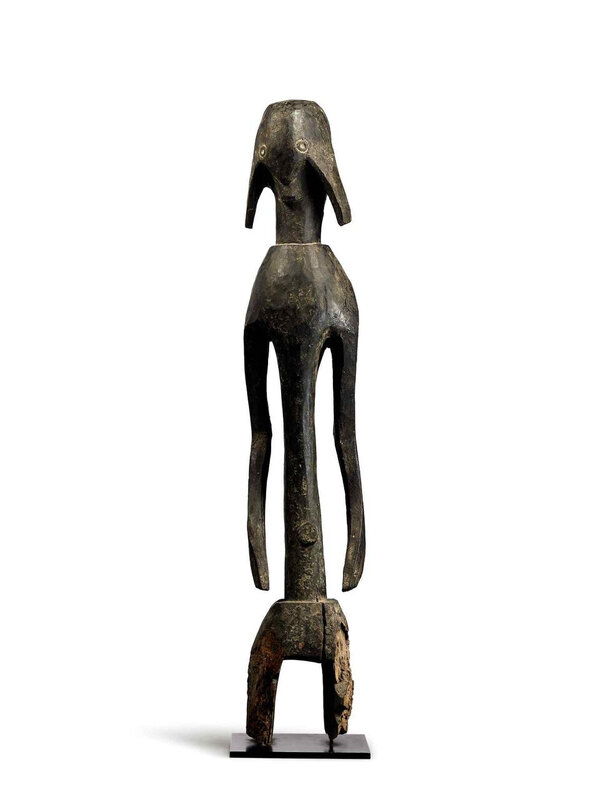