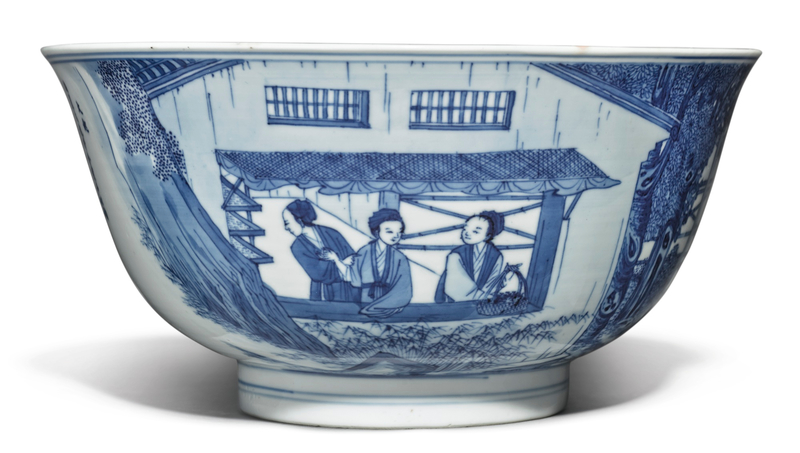 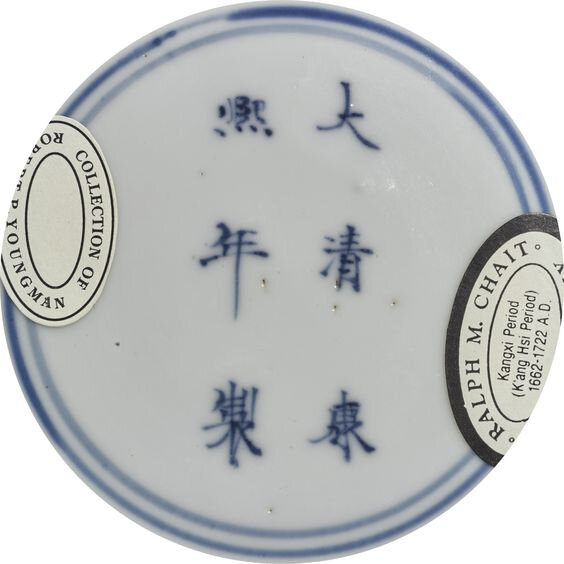 with deep rounded sides rising from a short straight foot, finely painted around the exterior in rich cobalt-blue tones with three scenes of silk production, the exterior with a woman and attendant carrying baskets amid leafing mulberry trees and a group a three ladies minding trays of silk worm cocoons, divided by an inscription, the interior with a medallion depicting silk weaving with one woman seated at a loom and two others nearby holding spools all enclosed by double lines and a dense honeycomb diaper border under the rim, the base with a six-character mark in underglaze blue, wood stand (2).

Property from the Collection of Robert Youngman

Note: The present bowl is part of a small, exceptionally rare group depicting scenes of agricultural production and sericulture. The compositions on these Kangxi mark and period porcelains are likely derived from woodblock prints of the Yuzhi gengzhi tu [Imperially Commissioned Illustrations of Agriculture and Sericulture], produced in 1696, commissioned by the Kangxi emperor with forty-six illustrations by the court painter Jiao Bingzhen.

A blue and white, Kangxi mark and period bowl, of the same rare type as the present example but depicting an agricultural scene, is in the Palace Museum, Beijing and illustrated in The Complete Collection of Treasures of the Palace Museum, Blue and White Porcelain with Underglazed Red (III), Hong Kong, 2000, pl. 64. See also another of this type painted with a scene of rice cultivation in the Shanghai Museum, illustrated in Kangxi Porcelain Wares from the Shanghai Museum, Hong Kong, 1998, pl. 24. Compare also a larger bowl with related decoration and with an apocryphal Chenghua mark, sold in our London rooms, 9th November 2005, lot 279.