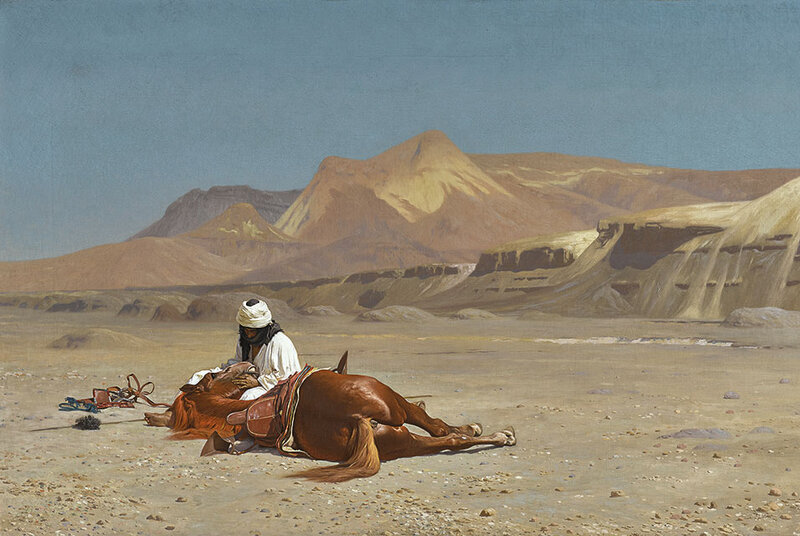 LONDON.- A rare masterpiece by Jean-Léon Gérôme will lead Sotheby’s annual Orientalist Sale in London. Cinematic in scale and impact, Rider and His Steed in the Desert is a unique work in Gérôme’s oeuvre. The highly charged picture captures both the stoicism of the North African tribespeople and a heroic struggle between man and nature. Estimated at £1,000,000-1,500,000, the oil is one of five works by the artist in a sale comprising 79 exceptional paintings, watercolours and sculptures that together provide fascinating historical insights into the Arab, Ottoman, and Islamic worlds during the 19th and early 20th centuries. Launched as an annual event by Sotheby’s in London in 2012 and now in its eighth season, The Orientalist Sale on 30 April 2019 will go on exhibition from 25 April alongside the Arts of the Islamic World auction, as part of Orientalist & Middle Eastern Week.

Claude Piening, Sotheby’s Head of Orientalist Paintings, commented: “We are particularly pleased with the breadth and depth of this year’s sale, distinguished by a single-owner group of watercolours of the Holy Land, North Africa and India by David Roberts, and no fewer than five oils by Jean-Léon Gérôme. Of these, Rider and his Steed, the highlight of the sale, is an especially powerful and emotional image of a moment of tenderness between man and beast against the backdrop of the sun-drenched desert. Cinematic in its conception even before the medium of film existed, with its wide-angle perspective and bright luminosity, the viewer is drawn into the scene which engages our imagination and our empathy: how have this rider and his exhausted horse ended up here? Where were they heading before they fell victim to heat and thirst? Bought at the landmark exhibition Artist Travellers at the Fine Arts Society in London in 1980, the painting is unique in Gérôme’s oeuvre in as much as he never produced other versions of répliques of the subject.”

Further works in the sale include: 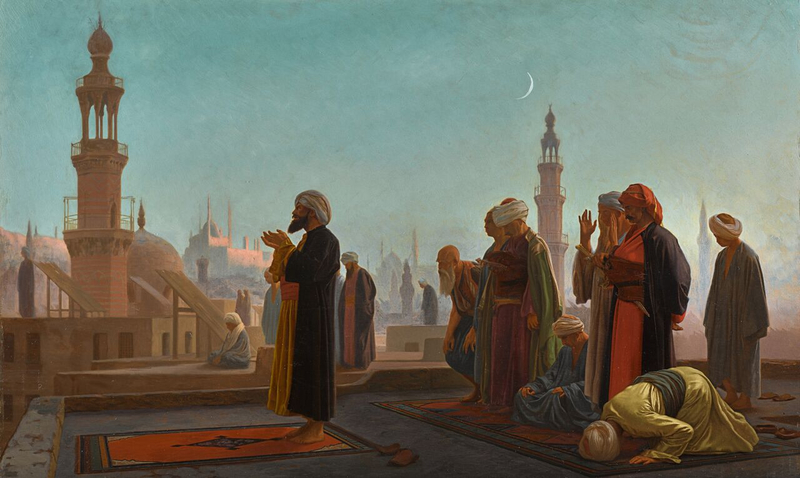 In the 1860s Gérôme began a series of paintings depicting Muslim men at prayer. These would become a signature theme of the artist's, and among his most popular Orientalist works. Evening Prayer holds a special place within this important group: a same-size, 'perfected' version of one of Gérôme's most evocative compositions exhibited at the Paris Salon in 1865 (Hamburg, Hamburger Kunsthalle), it is the culmination of his developing thoughts on, and ambitions for, this subject. – thought to be Ernst's largest known work and a veritable tour de force of Orientalist painting. A superb and rare group of watercolours by David Roberts which have remained in the same distinguished private collection since they were acquired in the late 1960s and early 1970s, featuring: 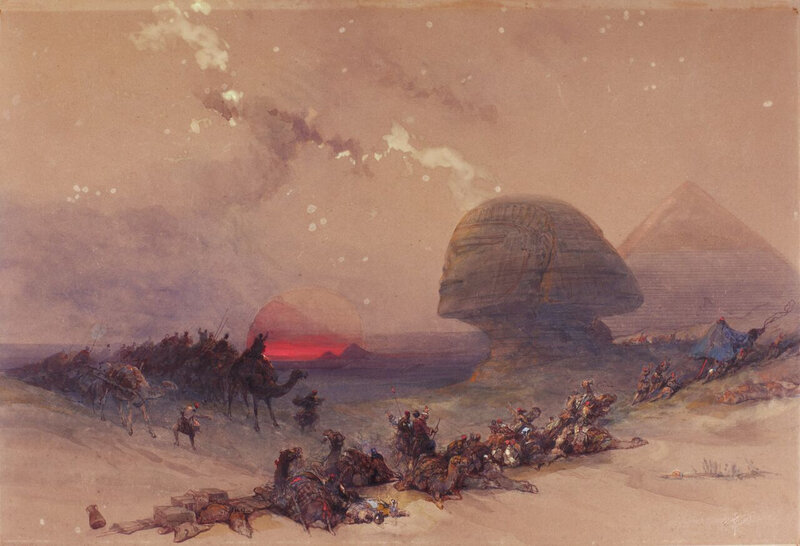 • Three works by Carl Haag depicting the Muslim shrine of the Dome of the Rock, on the Temple Mount in the old city of Jerusalem, a sacred site to both Muslims and Jews. Provenance: Private collection, UK (acquired directly from the artist, possibly in 1885); thence by descent
Somerville & Co. Ltd., London
Purchased from the above by the present owner in 2015.

Note: This and the following two works depict the Muslim shrine of the Dome of the Rock, on the Temple Mount in the old city of Jerusalem. The rock over which the shrine was built is sacred to both Muslims and Jews. The Prophet Muhammad is traditionally believed to have ascended into heaven from the site. In Jewish tradition it is here that Abraham, the progenitor and first patriarch of the Jewish people, is said to have prepared to sacrifice his son Isaac. The first of the three works depicts the rock itself; the second, the outer arcade of the Dome; and the third, the cave underneath the rock.

Initially completed in 691–92 CE at the order of the Umayyad Caliph Abd al-Malik on the site of the Second Jewish Temple, destroyed during the Roman Siege of Jerusalem in 70 CE, the original dome collapsed in 1015 and was rebuilt in 1022–23. Its octagonal plan and mosaics were modelled on nearby Byzantine churches and palaces, although its outside appearance has been significantly changed in the Ottoman period and again in the modern period.

When Haag painted these views, neither he nor any other non-Muslim had free access to the interior of the Dome or to its precincts. However, as Haag's inscriptions attest, it appears he painted these works in situ. After settling in England Haag enjoyed the patronage of Queen Victoria through whose offices Haag may have received special dispensation to visit these holy sites in 1859. 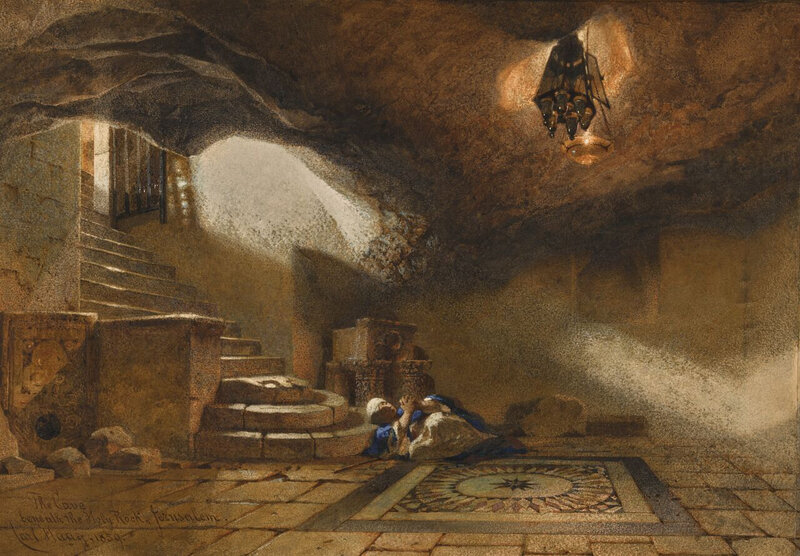 – painted in a village in the Ounila valley in the Atlas Mountains, south-east of Marrakesh. – a luminous panoramic view taking in many of Constantinople's most recognisable landmarks.

Note: Painted from Üsküdar on the Asian side of the Bosphorus, this luminous panoramic view takes in many of Constantinople's most recognisable landmarks. In the foreground is Leander's Tower, built in the eighteenth century, which has variously served as a lighthouse, a customs control point and a maritime toll gate. The tower is known in Turkish as the 'Maiden's Tower', after a legendary princess, said to have been confined here after a prophet foretold that she would die from a snake-bite. The snake duly appeared from a basket of figs and struck the fatal blow. The English name for the tower derives from the Greek myth of Leander, who swam the Hellespont to see his lover Hero. Beyond the islet on which the tower stands, the silhouette of the Old City rises majestically from the Bosphorus, topped by Hagia Sophia flanked, on the left, by the Blue Mosque and, on the right, by the Topkapi palace.

Carl Saltzmann studied at the Berlin Academy where he later taught, and enjoyed the patronage of Crown Princess Victoria and Crown Prince Frederick (the future Kaiser Frederick III). In 1878 Victoria invited Saltzmann to be her son Heinrich's chaperone on his two-year world tour aboard the corvette Prinz Adalbert. From 1884 to 1885, at Heinrich's request, the brothers received instruction in drawing and painting from him. When William acceded to the throne as Kaiser Wilhelm II in 1888, he asked Saltzmann to join him on his first and successive northern tours of Russia, Sweden, and Denmark to record the journeys. His success allowed Saltzmann to commission a villa and studio in Neubabelsberg near Potsdam, where he completed many of his finished paintings including the present one, inscribed Nbbg.