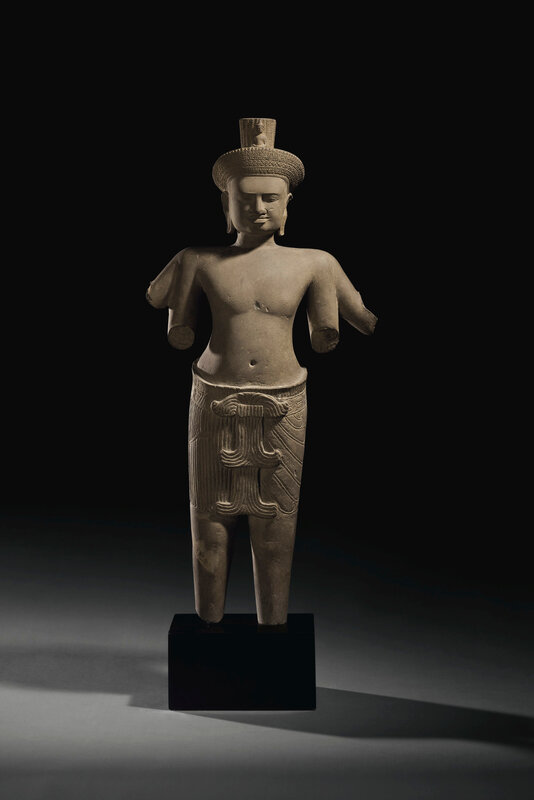 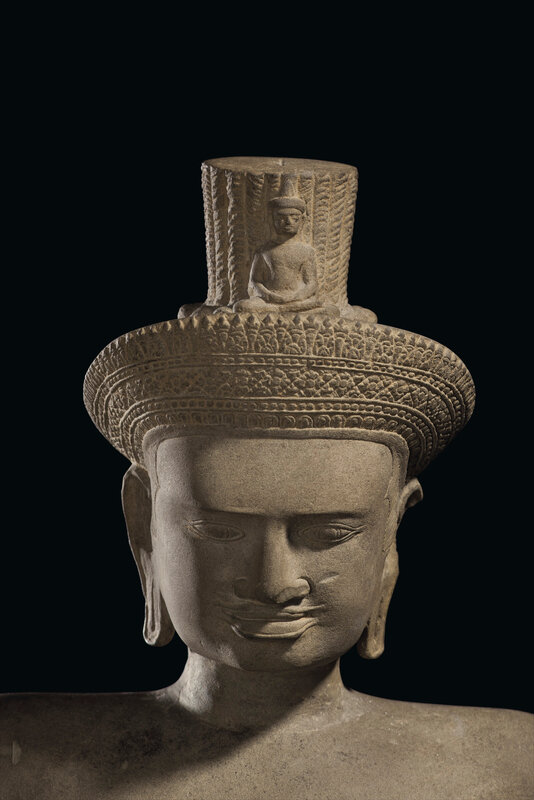 Clad in a short sampot carved with parallel pleats and secured with a jeweled belt and with a double-butterfly sash in front, his rounded face with delicately outlined lips and long pendulous earlobes, the hair arranged in a conical topknot centered by a diminutive figure of Amitabha and secured with a large foliate tiara.

Note: Powerfully and sensitively caved, this figure of Avalokiteshvara is a preeminent example of Khmer sculpture from the period in which the great temple of Angkor Wat was constructed. While Angkor Wat was dedicated to the Hindu god Vishnu, a strong Buddhist cult of devotion was also present in the region, which sponsored the production of artworks commissioned from the same workshops in which the Hindu sculptures were made. A homogenous style synthesizes Khmer sculpture across religious borders, such that Khmer culture has often been described as syncretic. However, the careful placement of iconographic indicators preserves and reveals the specific identities of the deities. Here, the four arms and cylindrical topknot might suggest that the male deity represents Vishnu, who is also depicted with these features. However, the presence of a diminutive seated figure of Amitabha Buddha, nestled in the plaited hair, identifies this figure as Avalokiteshvara.

In addition to his role as an attendant to the Buddha, Avalokiteshvara became a powerful divinity of his own in Southeast Asia. Avalokiteshvara is the Bodhisattva of Compassion, and also the Protector of Mariners. While originating in India, this bodhisattva enjoyed particular popularity in areas outside of the subcontinent that were reached through maritime trade networks, such as Sri Lanka and Southeast Asia.

The present figure is expertly modeled, suggesting an elite commission. The range of geometric and ornamental forms that decorate the garments and crown are testament to the complexity and detail of Khmer craftsmanship that persisted throughout the empire. The short sampot is arranged in multiple patterns, including tightly spaced vertical pleats around the right leg enhanced by a fishtail fold, and loosely fanned diagonal waves across the left. A double-anchor fold bridges the thighs, the gathered fabric pulled snugly between the legs from the verso and then set in an elegant crest on back and front just below the top of the sampot. The whole arrangement is secured with a broad belt of double-links, and the upper hem of the garment stands slightly away from the torso.

The chest is puffed as if the figure sips in a breath of prana, or sacred breath, and the body is slender with shoulders that are narrow from back to front as is typical for Angkor Wat period sculpture. The spine is erect and gently arched to emulate the naga, or sacred serpent, a symbol incorporated into Khmer imagery from Indic religion which became a governing principal at the core of Khmer visual and performing arts. A comparable work which shows this quintessentially Angkor period posture, as well as a similar treatment of the sampot, can be found in a figure of Avalokiteshvara at the Norton Simon Museum (F.1972.16.2.S).

The gently smiling face has bold features including almond-shaped eyes and full lips topped with a moustache. The crown is expertly carved with a tremendous level of detail and variety, including bands of pearls, diamond shapes, and rosettes. A row of curls spans the forehead and the plaited locks are pulled up beneath the crown tightly against the head and piled in a cylindrical topknot. The miniature figure of Amitabha, who is remarkably alert and lifelike, appears to be resting in the hair, carried compassionately by the bodhisattva. A commanding presence in the hallway linking his private quarters to the more public areas of his home, Mr. Ellsworth would have admired this magnificent sculpture multiple times each day.