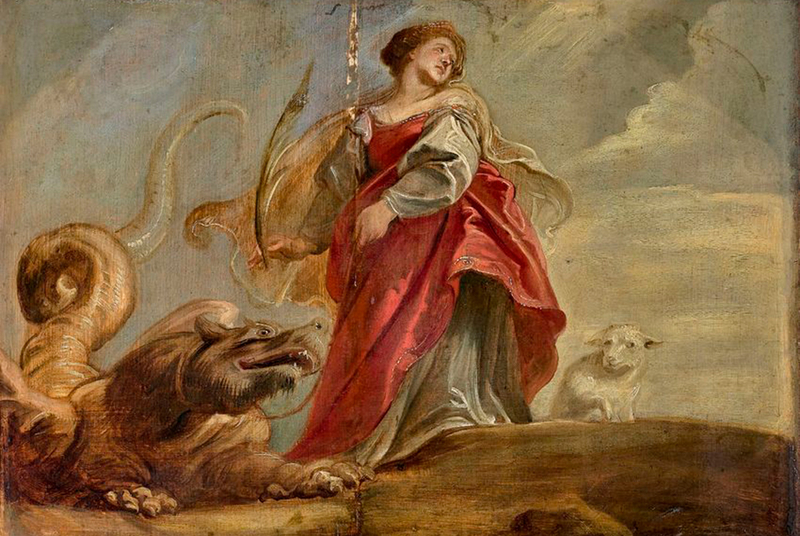 LILLE (AFP).- A lost sketch by Flemish Baroque master Peter Paul Rubens was sold at auction on Sunday for $1.46 million (1.3 million euros) after being rediscovered due to an inheritance, French auctioneers said.

The work which depicts Saint Margaret dressed in a red and white dress holding a cross in her hand and crushing a dragon dates from 1620, according to the Mercier auction house in Lille in northern France.

"This is the sketch that served as a model for one of the very large panels destined for the ceiling of the Jesuit Church in Antwerp," auctioneer Patrick Deguines told AFP.

In 1620, 39 panels were commissioned from Rubens for the church which was to become one of the largest in Flanders and "by its magnificence the spearhead of the Catholic Church in its fight with its Protestant rival", according to Mercier.

"These big panels were done by the whole workshop with the help of Rubens' students but the sketches were entirely painted by the master who refused to sell them," Deguines added.

The ceiling of the church, now the St Charles Borromeo Church, was destroyed by fire in 1718.

And while 33 sketches were known of and held by museums, six had disappeared, including this one of St Margaret until "it was recently rediscovered as a result of an inheritance", Deguines said.

Earlier this year, another drawing by Rubens -- described as "Nude Study of a Young Man with Raised Arms" -- sold for a record $8.2 million at auction in New York.

The previous record for a drawing from the Dutch master was set during a 2014 Christie's sale in London, when the only known preparatory drawing from Ruben's "Samson and Delilah" went for 3.2 million pounds ($5.5 million). © Agence France-Presse.