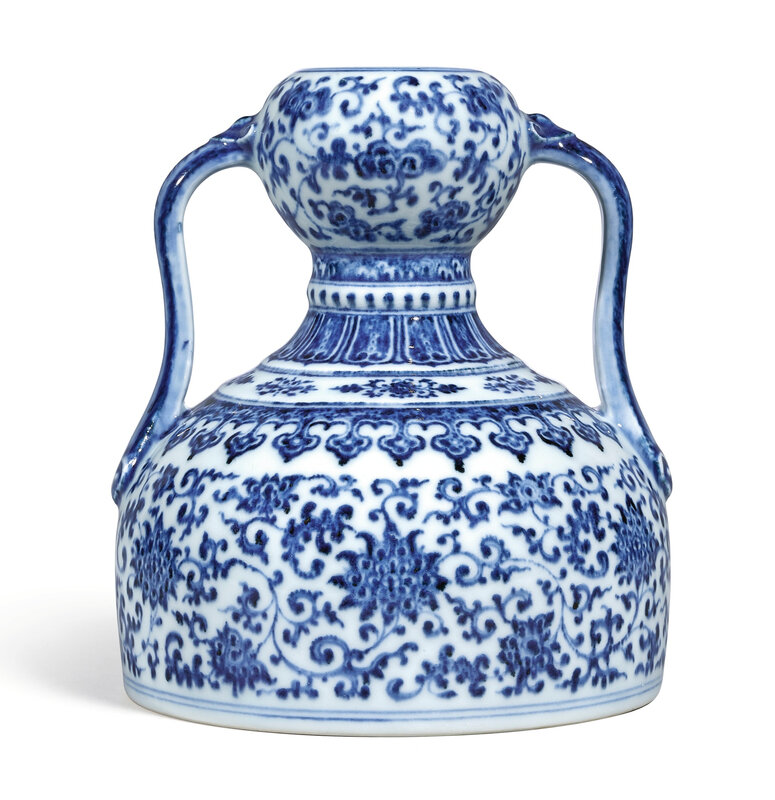 finely potted and painted in vivid tones of cobalt blue simulating Ming dynasty 'heaping and piling', the truncated lower bulb densely decorated with lotus scrolls, the shoulder draped with a band of pendent ruyi heads and detached floral sprigs, rising to a waisted neck with lappets collared by a raised ring, surmounted by a garlic-mouth painted with lingzhi borne on scrolling foliage and linked by a pair of curved ruyi handles, the base inscribed with a six-character seal mark.

Note: This rare flask displays the Qianlong Emperor's penchant for porcelain that was both innovative and artistically challenging, while evoking celebrated designs from China's glorious porcelain tradition. The result is an engaging vessel that is at once innovative and familiar. The double-gourd form and the floral scroll on this piece appear to derive from early Ming moonflasks (bianhu), which had been revived in the Yongzheng reign. This rare truncated version was first developed in the Yongzheng period, and extant examples are known painted in blue and white, copper red and doucaienamels, as well as covered in monochrome glazes. Flasks of this truncated form are also known covered in a tea-dust glaze. A flask from the collection of Sir Joseph Hotung, included in the Min Chiu Society exhibition An Anthology of Chinese Art, Hong Kong Museum of Art, Hong Kong, 1985, cat. no. 188, was originally sold in these rooms, 21st May 1979, lot 126, and again at Christie's Hong Kong, 30th May 2006, lot 1253; another was sold in these rooms, 11th April 2008, lot 2817; and a pair was sold in our London rooms, 10th December 1985, lot 271. Compare also a celadon-glazed version decorated with dragons, in the Shanghai Museum, illustrated in Lu Minghua, Qingdai Yongzheng – Xuantong guanyao ciqi [Qing dynasty official wares from the Yongzheng to the Xuantong reigns], Shanghai, 2014, pl. 4-13 (right); another from the J.M. Hu collection, sold in our New York rooms, 4th June 1985, lot 37; and a further flask decorated in doucai enamels, illustrated in James Spencer, Selected Chinese Ceramics from Han to Qing Dynasties, Taipei, 1990, pl. 160. Cf. my post: A fine and very rare blue and white double-gourd vase, Qianlong six-character sealmark and of the period (1735-1796)

For the prototype of this form and design, compare a Yonghzeng mark and period flask painted in underglaze blue and red, in the Palace Museum, Beijing, illustrated in The Complete Collection of Treasures of the Palace Museum. Blue and White Porcelain with Underglazed Red (III), Shanghai, 2000, pl. 200.