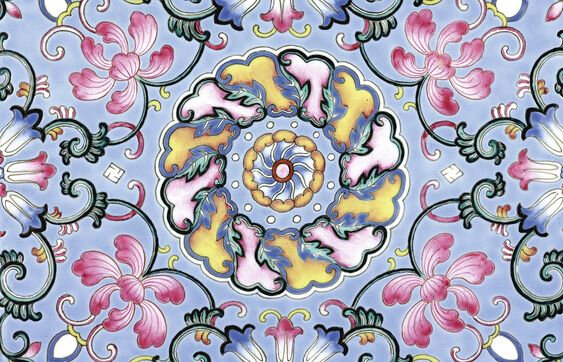 of square section, the straight sides flaring gently towards the everted rim and supported on four scrolled feet, each face brilliantly enamelled with a central floral medallion encircled by radiating lappets, surrounded by four large pink lotus blooms and stylised trefoil petals wreathed into foliate strapwork around wansymbols, all reserved against an opaque lavender-blue ground extended to the base, below a band of spots in blue, the top of the rim encircled by stylised floral sprays against a pink ground between fillet bands in gilt, the interior enamelled in turquoise.

Note: The present jardinière is notable for the ornate design of lotus blooms amongst foliate scrolls. The unique rendering of floral medallions cornered by pink lotuses in profile forms a symmetrical design, further enhanced by the thoughtful arrangement of stylised aerial lotuses wrapping around the sides creating an overall unity to the design. While the lotus is a traditionally Chinese motif, the style in which the decoration has been painted is inspired by Western painting techniques which were introduced to the court by Jesuit missionaries.

Although no other jardinière of this type appears to have been published, a similar form is known in porcelain jardinières made earlier in the Kangxi period, see a blue and white example in the National Palace Museum, included in Chen Yuh-Shiow ed., The Enchanting Splendour of Vases and Planters: A Special Exhibition of Flower Vessels from the Ming and Qing Dynasties, National Palace Museum, Taipei, 2014, cat. no. I-21. It has been suggested that jardinières of such form, usually decorated in blue and white or famille-verte, are made during the Kangxi period. These vessels then declined in production in the succeeding reigns during the Yongzheng and Qianlong periods, probably due to the durability of these porcelain vessels. These vessels are known in Chinese as penjing (pot landscapes) and were popular in the Qing dynasty for miniature gardens or bonsai trees, as illustrated in the detail of a Qing dynasty painting published in ibid., p. 73.

For other vessels also decorated with famille-rose flowers reserved on a lavender ground, see an 18th century cupstand sold in these rooms on 7th October 2010, lot 2164.