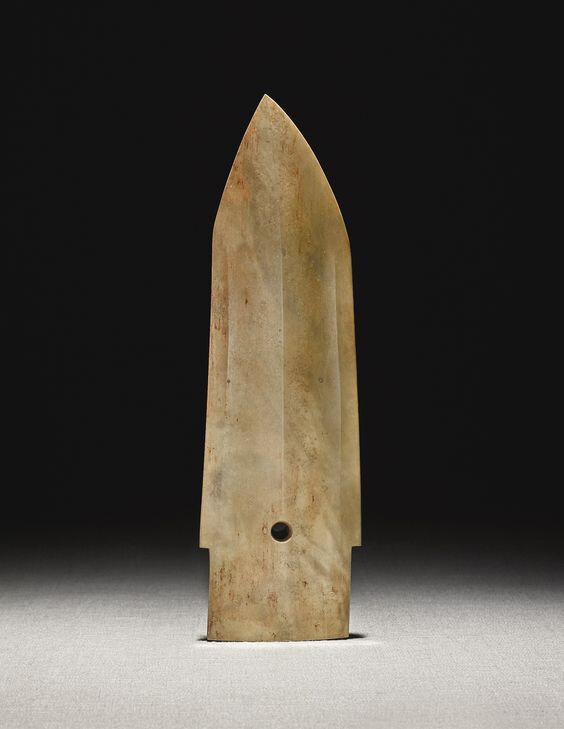 with bevelled edges tapering to an upward curving tip, centred with a raised ridge along the base of the offset tang to the sharp tip, pierced with an aperture, the stone of a mottled caramel-brown colour.

Note:Following the invention of bronze, weapons such as blades and daggers were added to the repertoire of pieces made in more refined materials for ceremonial use such as jade. Jade ge such as the present piece were based on bronze prototypes, their general shape conforming to that of a simplified pointed tablet. Compare the large number of ceremonial jade ge excavated from the tomb of Fu Hao at Anyang, published in Yinxu Fu Hao mu, Beijing, 1980, col. pl. 17.1 and 17.2, and 18.1. Compare Jessica Rawson, Chinese Jade. From the Neolithic to the Qing, London, 1995, pp. 192-196. For several other good examples of ceremonial daggers of this period see Max Loehr, Ancient Chinese Jades from the G. L. Winthrop Collection, The Fogg Art Museum, Harvard University, Cambridge, Massachusetts, 1975, pp. 53-74, figs 36-68.

For an example sold at auction, see the Shang jade blade from the J.T. Tai collection, sold in our New York rooms, 22nd March 2011, lot 61.