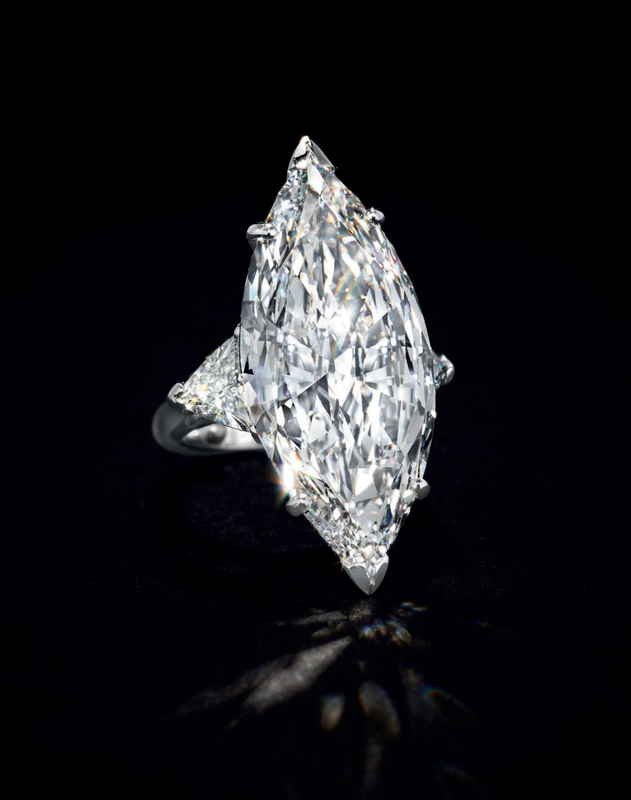 Private collections performed with exceptional results especially for jewels by Bulgari, Cartier, Harry Winston, Jean Schlumberger for Tiffany & Co., and Van Cleef & Arpels. The Collection of Florence and Herbert Irving featured a Sapphire and Diamond Ring of 16.88 carats by Bulgari, which realized more than four times its low estimate selling for $375,000. Elegance: A Collection from the Estate of Jean Tailer was 100% sold and highlighted by a Diamond, Sapphire, Emerald and Gold ‘Dolphin’ Brooch by Jean Schlumberger for Tiffany & Co. that sold for $68,750 and a Diamond Ring of 18.36 carats, J Color, VS2, by Cartier that realized $435,000. 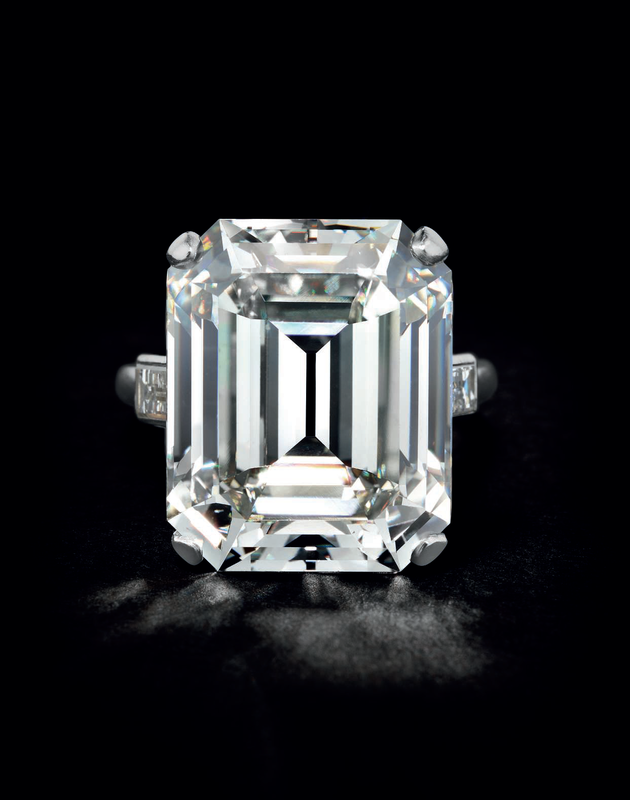 Other notable results included an iconic Gold, Ruby and Diamond ‘Zip’ Necklace by Van Cleef & Arpels that sold for $483,000 against a low estimate of $150,000; and a delightful Art Deco Enamel and Gold ‘Snow White and the Seven Dwarfs’ Charm Bracelet by Cartier that sold for an incredible $118,750 over seven times its low estimate. Additionally, designs by Raymond Yard, Jean Schlumberger, and Paul Flato were 100% sold, with many exceeding initial estimates including an Art Deco Ruby and Diamond Double Clip-Brooch by Raymond Yard, which realized $106,250; A Rare Multi-Gem and Gold Bangle Bracelet by Jean Schlumberger, which realized $81,250; and An Unusual Pair of Emerald and Diamond Clip-Brooches by Paul Flato, once owned by Mrs. Cole Porter and Jean Howard, that sold for $125,000. 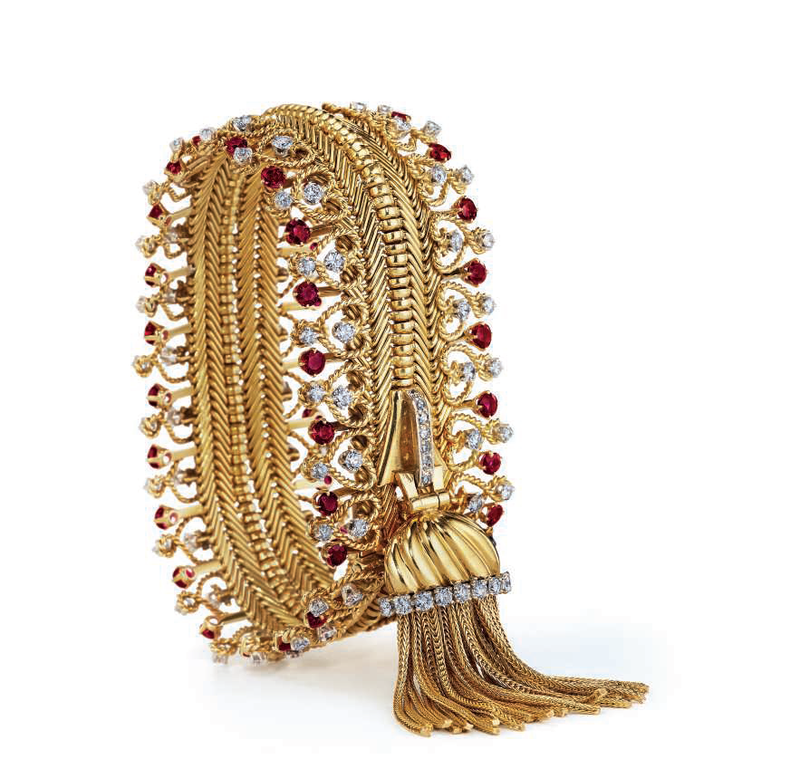 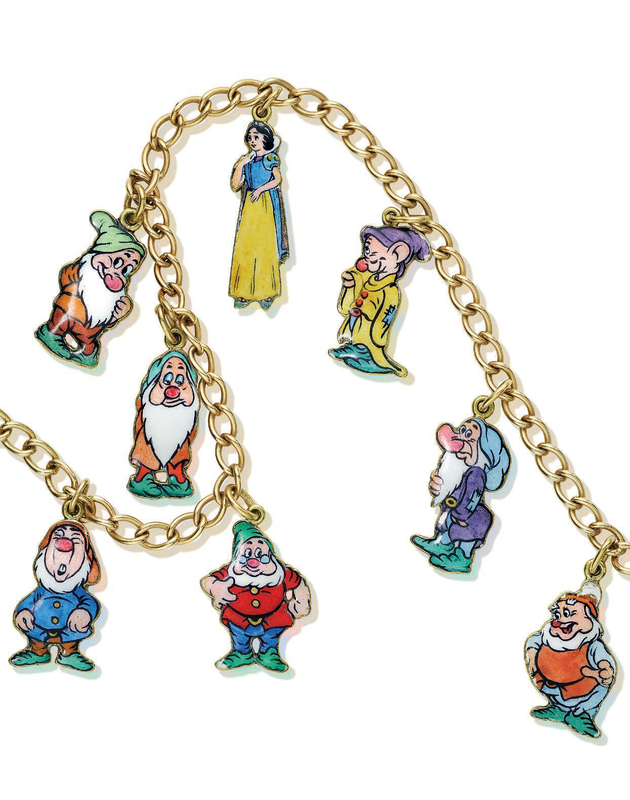 Note: Based on the Brothers Grimm German fairy tale, the animated feature film Snow White and the Seven Dwarfs was released on December 21, 1937 by Walt Disney Productions. This timeless film is the earliest example of a Disney animated feature and won Walt Disney an honorary Oscar at the 11th Academy Awards.

Considered by the United States Library of Congress as “culturally, historically, or aesthetically significant,” Snow White and the Seven Dwarfs was selected in 1989 for preservation in the National Film Registry. Among many other prestigious rankings, Disney’s transformation of the fairy tale has also resulted in numerous home video releases, theme park attractions, video games, Broadway musicals and has even inspired fine jewelry designs.

Lot 129 is a rare example of a Snow White charm bracelet by Cartier. Featuring enamel charms depicting Snow White, Doc, Grumpy, Happy, Sleepy, Dopey, Bashful and Sneezy, this 14k gold charm bracelet dates back to 1937. A version of this bracelet was worn by Walt Disney’s wife, Lillian, to the premier of the film at Carthay Circle Theater in Los Angeles.

Advertised in 1937 with a tag price of $100.00, this Cartier charm bracelet is timeless. The nostalgia, wonder and awe of Disney is captured through the brightly enameled and delightful characters that are universally recognized and loved. This bracelet is an essential addition to a jewelry collector’s trove and cannot help but bring a smile to any admirer’s face. Old, tapered baguette, baguette and kite-shaped diamonds, square, pentagonal, heptagonal and calibré-cut rubies, platinum, brooches detach from fitting and may be worn as individual clips, 2 ½ ins., circa 1925, each clip and fitting signed Yard.

Note: Known for his unique flair and keen eye for quality, Raymond Carter Yard set a high standard for American jewelry design in the 20th century. Born the son of a railroad conductor in Montclair, New Jersey, in 1885, as a boy Raymond Yard became known to William Elder Marcus, owner of Marcus & Co, an established jewelry firm in New York City. After Yard’s father died, Marcus offered the young Raymond a job, and at thirteen years of age he quit school and moved to Manhattan with his mother.

Under the guidance of William Elder Marcus, Yard immersed himself in the world of jewelry and steadily climbed the ranks of the firm, forming close relationships with the elite of American society along the way. Yard’s honest demeanor and knowledge of jewelry caught the eye of John D. Rockefeller, Jr. and they developed a personal and professional relationship that would greatly affect Yard’s career.

Rockefeller strongly encouraged Raymond Yard to establish his own firm. Yard resigned from Marcus & Co. at the age of 37, and opened his first salon in May 1922 at 527 Fifth Avenue. That year, the firm serviced over a thousand customers. Within four years, with business booming and more space needed, Raymond C. Yard, Inc. had moved location up Fifth Avenue. Raymond Yard’s extensive client base greatly helped him to grow his company. Rockefeller believed in Yard’s design work and introduced him to New York’s wealthiest families, including the Vanderbilts, the DuPonts and the Woolworths.

This beautiful assemblage of Yard jewelry comes from a private collection. Lots 74, 76 and 77, reflect the peak of the Yard classical style. During the 1920s and 1930s, Yard worked with fancy-cut diamonds and colored stones to create strikingly elegant designs. Lot 74 is a wonderful example of this motif. The rubies mounted in the double-clip brooch are a combination of traditional and non-traditional cuts. Against a background of old and baguette-cut diamonds, the rubies are equally bold and graceful.

In contrast to the vibrant colored stones and platinum used throughout the 1920s and 1930s, Lot 74 is a fine example of Yard’s work in the 1940s. During wartime, jewelers were challenged to create wearable pieces with limited resources. The use of white and yellow gold became more prominent and so did the continued use of precious and semi-precious stones. Lot 75 displays paler blue sapphires and circular-cut rubies, cascading from a white gold and diamond set mount. A clear contrast from the Art Deco bracelets and clip-brooch in this collection, this design incorporates softer elements, but is just as eye-catching and elegant. Note: Jean Michel Schlumberger (1907 - 1987) was an innovative French jewelry designer with a long and prolific career. Today he is most closely associated with Tiffany & Co. However, prior to joining the firm, Schlumberger had already made his mark on the world of jewelry design. He was born into a family in the textile industry in Alsace, France. As a child, Schlumberger was a burgeoning artist, always sketching. His parents refused to encourage this passion and prohibited him from receiving any kind of formal training. Instead, they sent him to Berlin to begin a career in finance. Despite this, Schlumberger was determined to pursue his passion and began his career in the world of fashion. In the 1930’s, starting with Elsa Schiaparelli, the cutting-edge clothing designer in Paris, he designed jewelry for her couture collection.

The end of the decade brought with it World War II and Schlumberger served in the French Army. Schlumberger served under General Charles de Gaulle and fought in the Middle East and at the Battle of Dunkirk. Following the war, Schlumberger made his way to New York, where he opened his own jewelry salon with Nicolas Bongard, who would become his longtime business partner. It was here that Schlumberger’s fanciful style was seen for the first time and soon became admired by fashionable women including Babe Paley, Elizabeth Taylor, and Jacqueline Kennedy. Lot 95, circa 1950, was produced during Schlumberger’s early years in New York. Always taking his cues from nature, this piece is a wonderful example of the organic, three-dimensional, and brilliant use of color that made Jean Schlumberger one of the most sought after jewelry designers of his era.