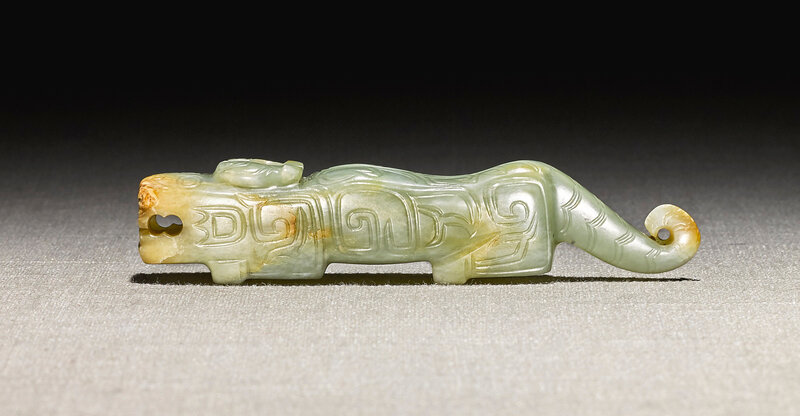 depicted crouching on all fours and terminating in a long tapering tail curling upwards at the end, the muscular contours of the horned beast, possibly a stylised tiger, superbly rendered with rounded outlines, incised overall with double-line scrollwork, the prominent snout rendered ferocious with an open mouth baring its fangs below oval eyes, the lustrous stone of a variegated celadon colour accentuated with attractive russet veining.

Literature: Robert P. Youngman, The Youngman Collection of Chinese Jades from Neolithic to Qing, Chicago, 2008, no. 41.

Jade tigers of this type appear to derive from contemporary depictions of tigers on bronzes from southern China, as discussed by Jessica Rawson in Chinese Jade from the Neolithic to the Qing, London, 1995, p. 206, where she illustrates a line drawing of a bronze tiger with one of a jade example from the tomb of Fu Hao, fig. 3.

Commentaires sur A celadon and russet jade figure of a beast, Shang dynasty (circa 1600-1046 BCE)