NEW YORK  – Propelled by strong interest in antique and contemporary jewels from the houses of Bulgari, Tiffany & Co., Cartier and Harry Winston, as well as for highly impressive colored and white diamonds, Sotheby’s spring auctions of Magnificent Jewels and Fine Jewels concluded today in New York with a combined total of $21.5 million. Below is a look at some of the highlights that drove today’s sparkling results:

Gary Schuler, Chairman of Sotheby’s Jewelry Division, Americas commented: “The timeless appeal of exceptionally rare signed jewelry was reasserted today in New York, with masterworks by Bulgari, Tiffany & Co., and Cartier – created over the course of a century – capturing the attention of international collectors. It was a thrill to bring the hammer down on these objects which have been the subject of so much interest and attention over the last months, and to see that attention translate into such strong bidding competition.” 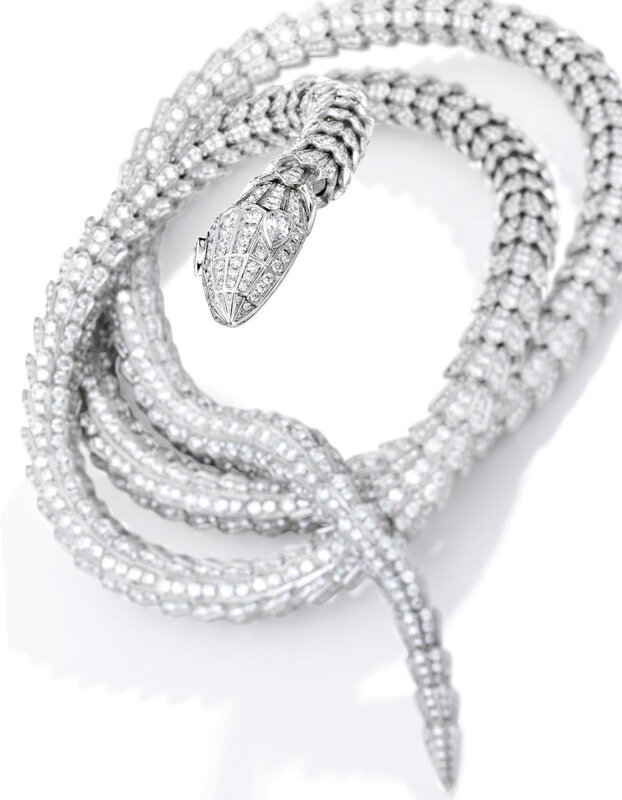 The auction was highlighted by An Impressive Diamond ‘Serpenti’ Necklace by Bulgari, which achieved $920,000 (estimate $800,000/1 million). Composed of 260 carats of diamonds and measuring over 40 inches, this example is a masterpiece of Bulgari’s iconic ‘Serpenti’ collection. Speaking to the Serpenti legacy, Frank Everett, Sales Director of Sotheby’s Luxury Division, commented: “Bulgari has been reinventing the ‘Serpenti’ jewels for decades, first with the gold tubogas watches that wrap and climb the wrist, later with colored enamel ‘scales’, and now in fully paved diamond contemporary pieces. I love the versatility of this necklace: it can be easily worn as a belt, a variety of single strand lengths by adjusting the clasp, or a double-wrapped necklace for maximum drama. It strikes me that no matter how often the Serpenti appears on the red carpet, the most famous and beautiful women in the world are happy to be seen in these pieces again and again. That’s the very definition of timeless and iconic.” 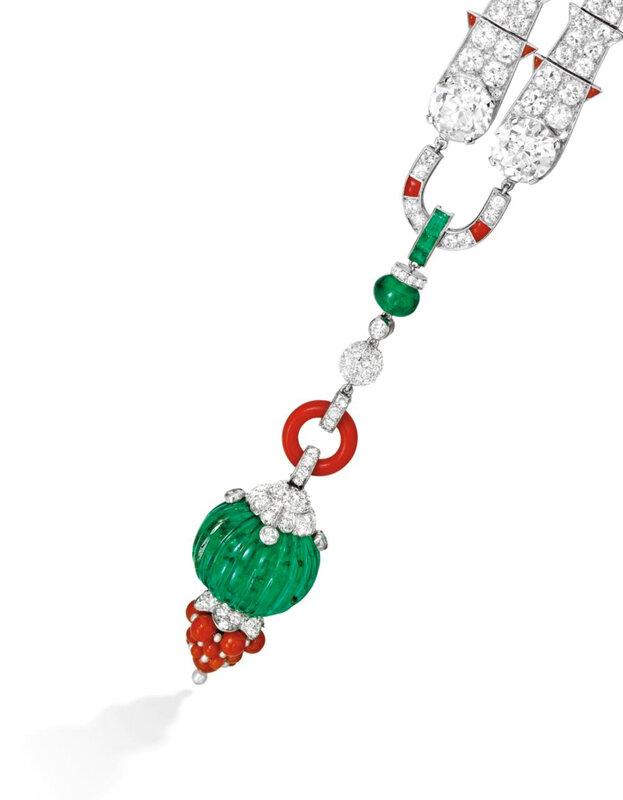 Of all the works produced by Cartier since its founding in 1847, it is their dazzling creations from the Art Deco period that epitomize the firm’s unparalleled innovation, style and craftsmanship. A rare discovery, the firm’s Diamond, Coral, Emerald and Seed Pearl Pendeloque Brooch sold in today’s auction for $824,000 – more than double its high estimate of $350,000. Its lithe, columnar form – originally intended to drape off the shoulder – was inspired by the Indian sarpech, a jeweled turban pin that dangled like a tassel over the eyebrow. In a nod to contemporary fashion, this piece’s attenuated silhouette and highly articulated diamond-set panels echo the increased mobility of drop-waist flapper dresses designed to swing along to the exuberant tones of the Charleston. Further, the graphic geometry of the piece as a whole is strongly architectural: the triangular coral and diamond projections are evocative of the winged roofs of far Eastern pagodas, simultaneously prefiguring New York’s iconic Chrysler Building. Returning consistently to its Indian inspiration, the large and beautifully carved emerald bead at the bottom recalls the onion-domed finials of the Taj Mahal.

Cf. my post: A rare and important diamond, coral, emerald and seed pearl brooch, Cartier, circa 1925 Created by Paulding Farnham for Tiffany & Co. To Be Shown at the 1904 World’s Fair in St. Louis, A Rare Enamel and Diamond Demi-Parure. Sold for $500,000. Courtesy Sotheby's.

After intense competition from 5 bidders, an Exceptionally Rare Enamel and Diamond Sautoir and Pair of Earrings by Tiffany & Co. sold to an online bidder for $500,000 (estimate $200,000/300,000). Designed by the great American jeweler Paulding Farnham, this set was first shown at the 1904 World’s Fair in St. Louis, which celebrated the centennial of the 1803 Louisiana Purchase. At the time, Farnham was Tiffany & Co.’s preeminent designer and the director of jewelry, responsible for famed designs including his acclaimed orchid series and the Belmont Stakes Trophy. The present necklace and earrings are set with large rose-cut diamonds framed with old European cut and single-cut diamonds. Stylized jardinières, nymphs and naiads, gargoyles, shield shapes, palmettes, acanthus leaves, scrolls and arabesques, are all gracefully combined into a harmonious flowing pattern decorated with colorful enamel. Works by Paulding Farnham rarely appear on the market, but some important pieces have made their way into private collections and museums including The Metropolitan Museum of Art, New York, the Cooper Hewitt, Smithsonian Design Museum, The Brooklyn Museum, The Walters Art Gallery in Baltimore and the Museum of Fine Arts, Boston.

Often referred to as ‘The King of Diamonds,’ Harry Winston is recognized as one of the greatest jewel connoisseurs from the 20th century. Featuring two pear-shaped emeralds, each weighing over 10 carats, this pair of Emerald and Diamond Pendant-Earclips by the storied jeweler achieved $764,000 (estimate $600/800,000). 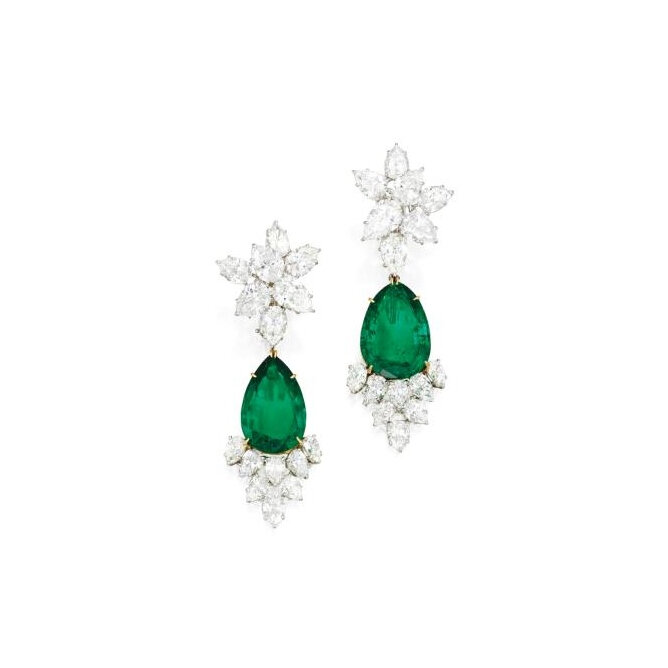 Kendall Reed, Head of Fine Jewels and Global Head of Online Jewels said: "We are incredibly pleased with the results of this afternoon’s sale, which neared our high estimate and had a strong 82% of lots sold. Similar to what we saw this morning, this result was driven by strong competition for signed pieces by celebrated makers like Cartier, Van Cleef & Arpels and Tiffany & Co., in addition to colored stones and diamonds. We continue to see enthusiastic bidding for fashionable, wearable jewelry offered at a variety of price points.”