Chinese Works of Art from a Princely Collection at Christie's London, 14 May 2019

Chinese Works of Art from a Princely Collection at Christie's London, 14 May 2019 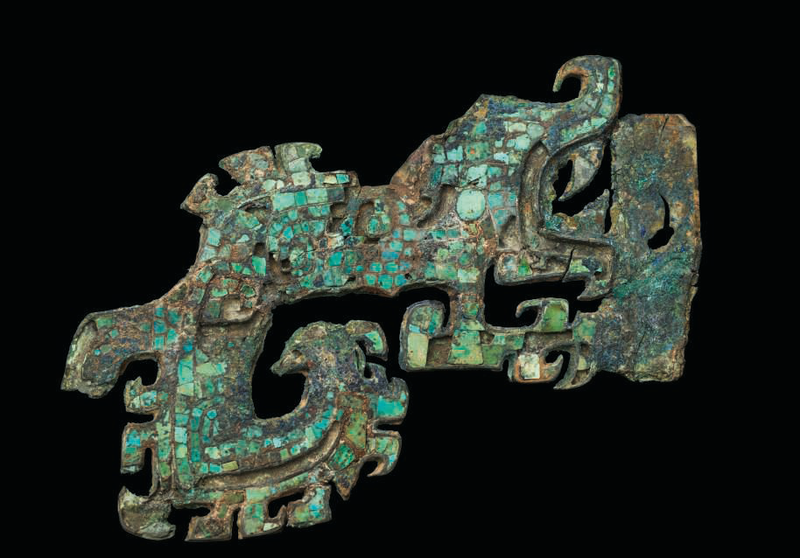 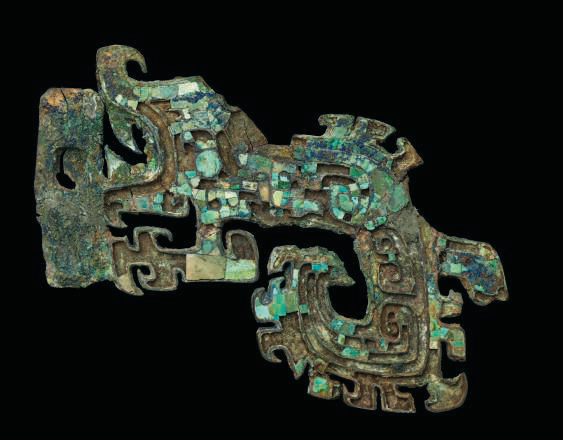 Note: This hilt originally formed part of a ceremonial dagger and can be compared to examples found in Anyang, the Shang capital from 1400-1050 BC, and included in the funerary furniture of Fu Hao, King Wu Ding's wife. A similar hilt at the Musee Guimet, Paris, is illustrated by Maud Girard-Geslan in Bronze Archaiques de Chine, Tresors du Musee Guimet, Paris, 1995, pp178-179. Some complete daggers are published in the National Palace Museum exhibition catalogue Collector's Exhibition of Archaic Jades, Beijing, 1999, pl.61 and in Mary Tregear and Shelagh Vainker, Tresors de l'Art en Chine, Paris, 1995, p.207. The sword guard is well carved in low relief on each side with a median ridge that centres a taotie mask flanked by C-scrolls. The guard is still attached to a section of the original iron sword and a fragment of the wooden hilt and the jade is of an olive-brown tone.

Note: The current lot may be compared with a jade guard illustrated in Jadeware (1): The Complete Collection of Treasures of the Palace Museum, no. 171, p 204. The deep sides of the cup are engraved in meticulous detail with equestrian huntsmen in pursuit of game in a landscape with flowers against a ring-punched ground above the knopped spreading foot and with a band of scrolling foliage below the rim.

Note: The form and design of this stem cup may be compared to a slightly smaller Tang dynasty silver stem cup (9.8 cm. high) illustrated by Carol Michaelson in Gilded Dragons, London, 1999, p 22. fig. 4., similarly decorated with equestrian huntsmen chasing game against a ring punched ground and below a scrolling floral band. The current lot may also be compared to a stem cup sold at Christie's London, 14 July 1980, lot 298. The square seal is surmounted by a naturalistically cast tortoise standing foursquare. The base is incised with four characters. The seal is cast as a ferocious chimera with winged forelegs supported on a cloud-form base, its head turned to the side and jaw open in a growl beneath protruding eyes masked with heavy brows, its coat detailed with ring-punched scrolls. The underside seal face is cast with an inscription reading Huang Song dazhong xiangfu guichou xiuneisi yinzuofang qian zhi that may be translated as 'respectfully made by the jewellery section of the Palace Maintenance Office in the year guichou (1013 AD) of the Dazhong Xiangfu period of the exalted Song dynasty'. The rectangular seal is of square cross-section and is incised on one vertical side with the characters shaoling ju cixian zhuan, and on the base with an inscription of fourteen seal characters and the characters zhuwen. The stone is of a rich honey tone.

Note: The inscription on the vertical side bears the zi or style name of Cixian, indicating the artist Zhao Zhichen (1781-1860) who is recorded in Zhongguo Meishujia Renming Cidian, Shanghai renmin chubanshe, 2003, p. 1270.

The inscription on the base are two verses from a poem, Jiang Shang Yin, written by the Tang poet Li Bai (AD 701-762). The angled stone is drilled for suspension and is decorated in two shades of gilding with confronted five-clawed dragons running amidst clouds in pursuit of a flaming pearl, and the edges are painted with cartouches enclosing double ruyi and inscribed with Kangxi wushiwu nianji, 'Made in the fifty-fifth year of the Kangxi period' [corresponding to 1716]), and on the striking edge with xianlu, which denotes the tone. The jade is a dark green colour, stand.

Literature: Robert Kleiner, Chinese Jades from the Collection of Alan and Simone Hartman, Hong Kong, 1996, no. 64.

Note: Chime stones appeared in the Shang dynasty and are amongst the earliest musical instruments in China. The chime would have been suspended from the circular aperture at its right angle and assembled in graduated sets of sixteen, according to size. They were hung in two tiers of eight within tall wooden frames. During the early Qing dynasty, the desire to follow Confucian traditions saw a revival of chime stones made by imperial commission for use in ritual ceremonies, banquets and processions.

Qing court protocol referred to two different types of chime stone sets: sets of sixteen stones (bianqing) and sets of twelve individual stones (teqing). The current lot belongs to the first category. It is more unusual to find a chime stone dated to the Kangxi period than those made during the Qianlong period. A Kangxi period spinach-green chime stone also dated to 1716, was included in the exhibition Chinese Jade throughout the Ages, Victoria and Albert Museum, London, 1975, and illustrated in the Catalogue, no. 410. The stone has black striations reminiscent of mountain peaks, and is enclosed by a hardwood frame, huanghuali wood frame.

Note: Marble panels with natural markings reminiscent of ink landscape paintings became popular from the Ming dynasty onwards. They were treasured by scholars who displayed them in their studios and gardens. These 'stone paintings', were predominantly made of marble quarried from Dali in Yunan province. The flawless material is carved in imitation of an archaic bronze hu, with narrow raised bands encircling the body, neck, rim and foot. The mark is reserved on a finely stippled square on the base, box.

Note: This skilfully worked elegant vase may be compared with other small flawless rock crystal scholar's table articles produced by the Palace Workshops (Zaobanchu), including two plain cylindrical brush pots with similarly executed four-character Qianlong yuyong marks (made for the personal use of the Qianlong Emperor). One is published by G. Tsang and H. Moss, Arts from the Scholar's Studio, Oriental Ceramic Society, Hong Kong, 1986, pp. 156-7. no. 130, the other in The Literati Mode, Sydney L. Moss Ltd., London, 1986, no. 115. These pieces may have graced a desk or table in the imperial palace, or might have been included in one of the Qianlong Emperor's treasure boxes. Other crystal table articles in the Qing court collection, Beijing, are illustrated in The Complete Treasures of the Palace Museum - Small Refined Articles of the Study, Shanghai, 2009, no. 92, a mountain-form brush rest; no. 266, two mountain-peaked seals; and no. 281, a square seal paste box.

Christie's. Fine Chinese Ceramics and Works of Art, London, 14 May 2019

Commentaires sur Chinese Works of Art from a Princely Collection at Christie's London, 14 May 2019