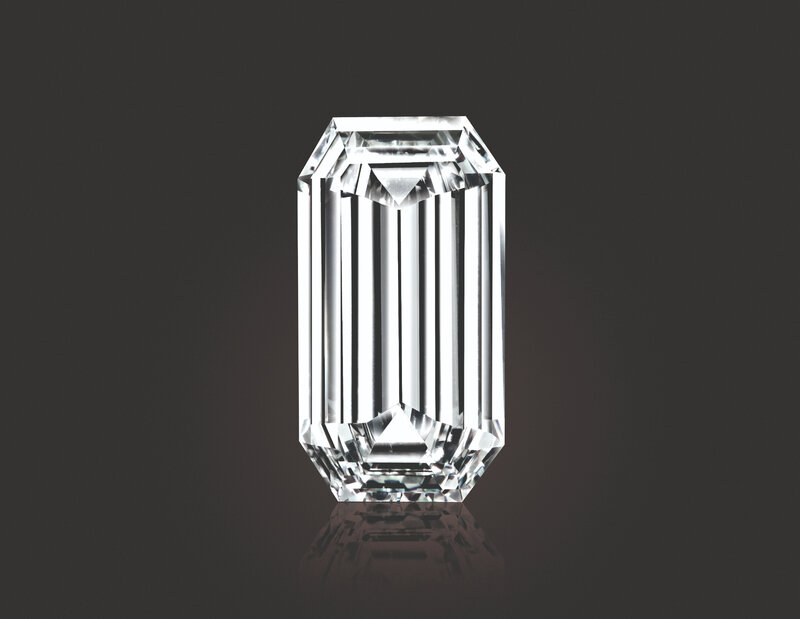 London/New York – Christie’s announces Maharajas & Mughal Magnificence, a landmark auction which will take place in New York on 19 June 2019, presenting an outstanding selection of exceptional Mughal jewellery, objects, and important gemstones. Consisting of almost four hundred lots spanning over five hundred years, the auction showcases the illustrious culture of Indian jeweled arts from the Mughal period and the age of the Maharajas through to the present day. Highlights of the auction will be exhibited in London beginning April 24 and in Shanghai from April 25, marking the start of a global tour which will travel to Geneva, Hong Kong and New York.

Maharajas & Mughal Magnificence presents an unprecedented group of jewels, gemstones, and decorative objects exploring the creative dialogue between India and the West.

The selection encompasses significant Mughal jewels, including sensational sarpechs (turban ornaments), significant necklaces such as the Imperial Spinel Necklace, and a diamond rivière necklace originally from the collection of the Nizam of Hyderabad comprising almost 200 carats of Golconda diamonds.  Also featured are carved Mughal emeralds, ranging in weight from approximately 10 carats to over 200 carats, one of the famed Arcot diamonds and the magnificent ‘Mirror of Paradise’ D colour Internally Flawless Golconda diamond of 52.58 carats. 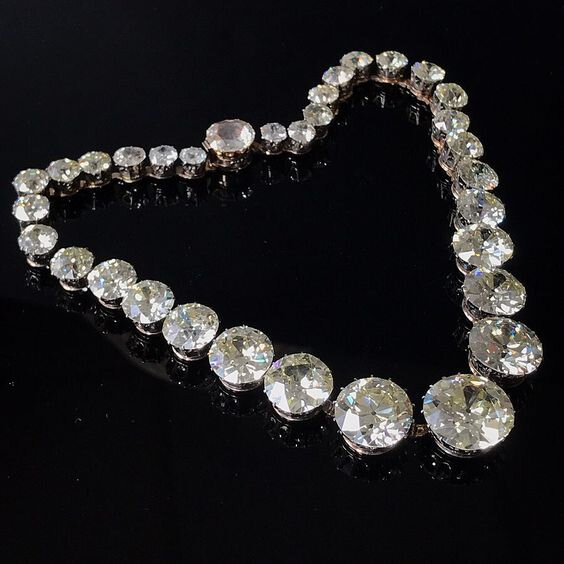 Originally in the collection of the Nizam of Hyderabad, one of the richest men in the world at the time, the Golconda diamond rivière necklace (circa 1890) has over 200 carats of highly prized Indian diamonds ranging in size from 9.9 to 24.38 carats. © The Al Thani Collection.

These significant historical jewels are complemented by a strong selection of important creations from the 20th century from the major houses of Bulgari, Cartier, Janesich, Lacloche, Linzeler, Mauboussin, and Mellerio, along with contemporary creations by Bhagat and JAR.

The Patiala Ruby Choker is a superb example of the fusion between India and the West.  Commissioned by Maharaja Bhupinder Singh of Patiala and created by Cartier in 1931, the exquisite ruby, diamond and pearl necklace represents one of the greatest relationships that developed during this period.  The Maharaja of Patiala was one of Cartier’s most important Indian clients of the 1920s and 1930s, often traveling to Paris with trunks of diamonds and gemstones from his treasury for Cartier’s workshops to produce incredible jewels that captured the romance between the two cultures. The finest gems in an Indian treasury would have been mounted into impressive jewellery for a ruler to wear. The necklace (kanthu)  shown below is defined by seven foiled emeralds in closed gold settings, separated by diamond clusters.

Created during the mid to late 19th century, the necklace exemplifies the social dynamics among Indian princes in this period, in which the ownership of magnificent jewels assumed great importance. The Enamel and Diamond Peacock Aigrette, by Mellerio dits Meller, was purchased by the Maharaja Jagatjit Singh of Kapurthala in 1905 during one of his trips to Paris.  A great connoisseur of French culture, the Maharaja was captivated by the peacock motif of the aigrette, a bird that is still greatly revered in India today.  In later years, the aigrette would be seen worn by Anita Delgado, his fifth wife, whom he met one evening while wearing the Mellerio jewel on his own turban. This collection exemplifies the true extent of the sophistication of artistic production from the Royal courts of India from the 17thcentury onwards. These treasures comprise the most des, vivid enamels, opulent jewels and magnificent Royal portraits. Among the many highlights illustrating the scope of this collection are a jade-hilted dagger once owned by Shah Jahan, the intriguing magic box of Tipu Sultan, the heavily diamond-encrusted state sword of the Nizam of Hyderabad, and a diamond and enamel covered gold huqqa, revealing Indian opulence at its best. A jade cup, the naturalistic form terminating in an ibex head, was so astounding that the Chinese Emperor Qianlong (r.1735-1796) composed a poem in its honor which he had inscribed on the interior.  Alongside these highlights are numerous fabulous works of art showcasing the development of the intricate enameling techniques that started at the Mughal court, and then spread to all the leading local kingdoms throughout the subcontinent, each with its own workshop, making sumptuous works of art and jewels that embodied the power and wealth of these competing Rulers. 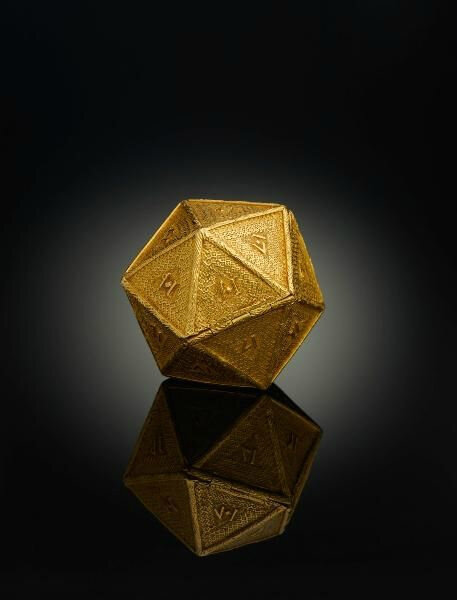 In the sale will be a gold pen case and inkwell (1575-1600), jewelled with diamonds, rubies and emeralds. The symbolic importance of ceremonial inkwells was well known in the medieval Islamic world, where they were the insignia of both imperial rank and governmental office.

It carried even greater resonance in a Muslim context because of the importance of the written word of the Qur’an. Pen cases were prized possessions of sultans and their chief ministers — the royal pen box implied learning and reinforced authority.

During the Mughal dynasty, jewelled pen case and inkwell sets were presented by emperors as a sign of the highest distinction. 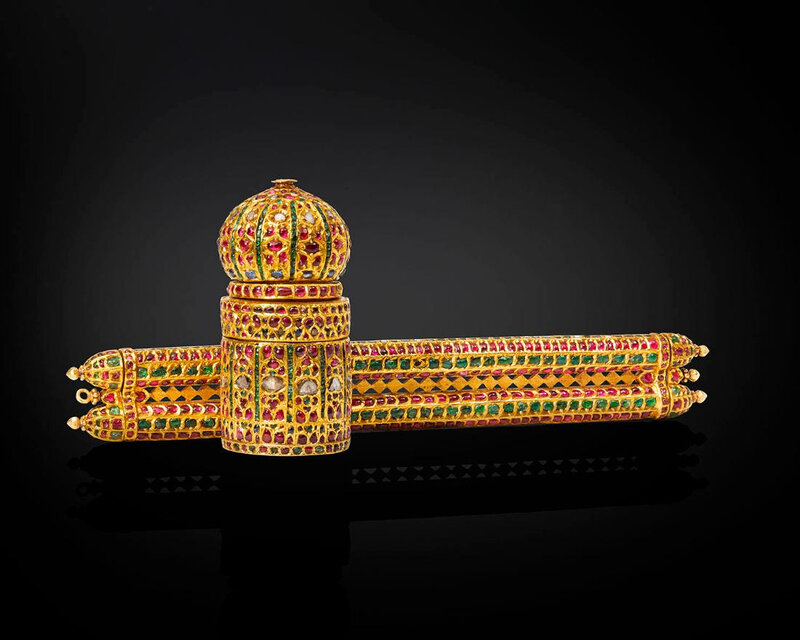 Among the collection’s countless highlights is a dagger, from either Tanjore or Mysore, that dates to between 1790 and 1810. The dagger’s gold hilt is crafted in the form of a yali, a mythical lion-headed beast which is well known in the architecture of southern India, and is kundan-set with foiled table-cut diamonds, cabochon rubies and cabochon emeralds.

A gold gem-set hilted dagger (Kinjal). The hilt in the form of a yali, set with diamonds, rubies and emeralds, steel blade. Tanjore or Mysore, South India, 1790-1810. © The Al Thani Collection

Among the many Indian royal treasures in the collection is a white gold, diamond-encrusted jigha  (turban ornament) that would probably have been worn on formal occasions by a Maharaja from an important state. Belle Époque diamond jigha, 1907 and remodelled circa 1935. The turban ornament set with old baguette and pear-shaped diamonds, white gold, fitted with plume holder on the reverse, lower portion detachable and may be worn as a brooch. © The Al Thani Collection.

The collection features a number of outstanding diamonds, including the Mirror of Paradise Diamond and the Arcot II Diamond, both of which originate from the Golconda mine, the earliest diamond mine known to man.

The Arcot Diamond, a brilliant-cut, pear-shaped, D-colour stone weighing 17.21 carats, was one of two such diamond ear drops sent as gifts to Queen Charlotte (1744-1818), the wife of King George III, from the Nawab of Arcot. The diamonds were later acquired at auction by the Marquess of Westminster and subsequently mounted in the Westminster Tiara, which was worn at the coronation of Queen Elizabeth II. The Nizam of Hyderabad Necklace (mid to late 19th century), shown above, is made of gold with seven large foiled triangular diamonds, each framed in an openwork panel of kundan-set diamond leaves. At front centre is a triangular diamond pendant surrounded by 12 diamond leaves, mounted on an inner edge with a melon-cut emerald bead.

Spectacular parade necklaces became a hallmark of Indian royal attire in the late 19th century,  and this Nizam of Hyderabad Necklace is an especially spectacular example of Indian princely jewellery. Of all the great jewellery houses, Cartier had the longest and most productive association with India, and these cross-cultural references are evident in many of the spectacular Cartier creations in the collection. Kadakia describes Jacques Cartier’s passion for India as ‘a culturally significant moment’ in the history of jewellery.

In the early years of the 20th century, Jacques Cartier forged close links with a number of Indian princes in Europe, relationships which Kadakia describes as ‘a great meeting of minds’. The jeweller made frequent visits to India, regularly meeting with the royal families with whom he established close relationships.

Many of Cartier’s finest jewels from this period were inspired by Indian architecture, gems and jewels. One such example is a stunning 1922 platinum belt brooch set with diamonds, emeralds and sapphires (shown above). The calibré-cut sapphire trim and diamond detail are reminiscent of ornate archways present in Mughal palaces and royal quarters.

This incredible piece was part of the collection of Sybil Sassoon, Marchioness of Cholmondeley, and daughter of Sir Edward Sassoon and Baroness Aline de Rothschild. She chose to wear it, alongside her most important jewels, for both the coronation of King George VI in 1937 and the coronation of Queen Elizabeth II in 1953. Other highlights from the collection include The Taj Mahal Emerald, an extraordinary large carved stone named for the carved floral engravings that were reminiscent of the coloured stone inlay of the Taj Mahal. The emerald had once formed the centrepiece of one of Cartier’s most iconic creations, the Collier Bérénice, a necklace or shoulder ornament, which was exhibited in 1925 at the Exposition des Arts Décoratifs et Industriels Modernes in Paris. The ‘devant-de-corsage’ brooch is an extraordinary example of the magnificence of the Belle Époque, combining top diamonds, a delicate design, the finest maker and famous provenance.

It was made to order in 1912 for Solomon Barnato Joel, who made his fortune in the South African diamond mines. As a director of Barnato Brothers as well as of De Beers Consolidated Diamonds Mines, Joel was a major influence on the diamond and gold industries at the beginning of the 20th century. His fascination with diamonds remained a constant throughout his long career, and for this brooch Joel provided Cartier with his four finest stones. Jacques Cartier travelled to India and the Middle East to buy natural pearls. The Cartier natural pearl necklace shown above features pearls with ‘an incredible graduation in size’, says the specialist. The collection features a group of pocket watches, which have all been hand-painted with images of the Maharajas who commissioned them. The example below shows Maharaja Bhupinder Singh of Patiala in one of his iconic bejewelled portraits. Birds, especially falcons, were closely associated with kingship at the Mughal court and in successor states. The sport of falconry was a favoured pastime among the royal princes, and is frequently referred to and depicted in paintings of the Mughal era.

Miniature paintings of falcons show them adorned with fine materials, including the anklets needed to restrain them. The pair of jade falcon anklets shown above date from circa 1800 and have gold rims framing a band of five rubies in leaf-shaped kundan  settings. François Curiel, Chairman, Christie’s Europe, remarks “This landmark collection traces the history of Mughal jewels and objects to present day and represents the most significant collection of its type ever to come to auction. This project is a true partnership between our market-leading Jewellery department, led by Rahul Kadakia, and World Art department, led by William Robinson, along with independent art advisory firm The Fine Art Group. The collection begins in Mughal India, the most important dynasty that ruled the country, famous for its emeralds, diamonds, sapphires, rubies, jeweled weapons and objects that are bejeweled beyond belief. From exceptional daggers worn by the elite Nobles and Royal families of India to important jewels inspired by Indian tradition and architecture, the auction of this notable collection presents a truly significant cultural moment and offers a milestone opportunity for collectors.”