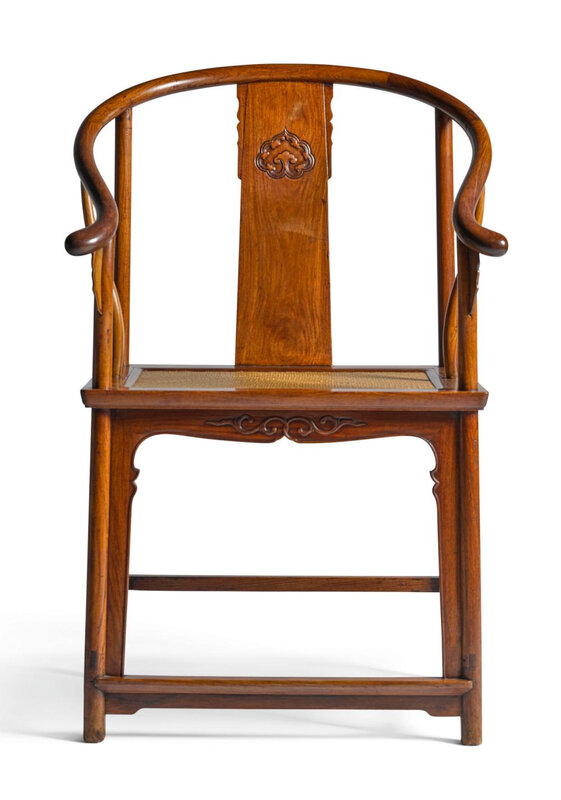 with curving toprail sloping down to the arms supported on serpentine side posts and terminating in a curved hook beyond the corner posts set with shaped spandrels, the backsplat carved with a ruyi-shaped panel enclosing dragons, the back corner posts continuing below the rectangular frame, with mat seat, to the back legs joined by stretchers and a footrest with plain shaped apron.

Note: Chairs of this elegant design are strikingly modern in their seeming simplicity. The fluidity of their form, achieved through the continuous curved crest rail that functions as both a back and an arm rest, has ensured the continued popularity of this design. Commonly referred to as quanyi and "horseshoe-back chair", these armchairs were seats of honour and, when draped with sumptuous textiles, they gave their sitters a commanding presence. Frequently depicted in Ming and Qing dynasty woodblock illustrations, they were also used informally while dining, painting or receiving guests, and with the addition of two carrying poles, they became sedan chairs reserved for officials of high rank.

This elegant and light-weight design derives from chairs made of pliable lengths of bamboo, bent into a 'U'-shape and bound together using natural fibres. Cabinet makers cleverly adapted this design to hardwood furniture by developing ingenious joinery techniques. In order to create the continuous back, members were fitted together with a cut-out to accommodate a tapered wood pin that would lock them firmly in place when inserted. The complexity of the design required utmost precision, as a slight error in the tilt of any of the joins would be magnified by the adjoining members.