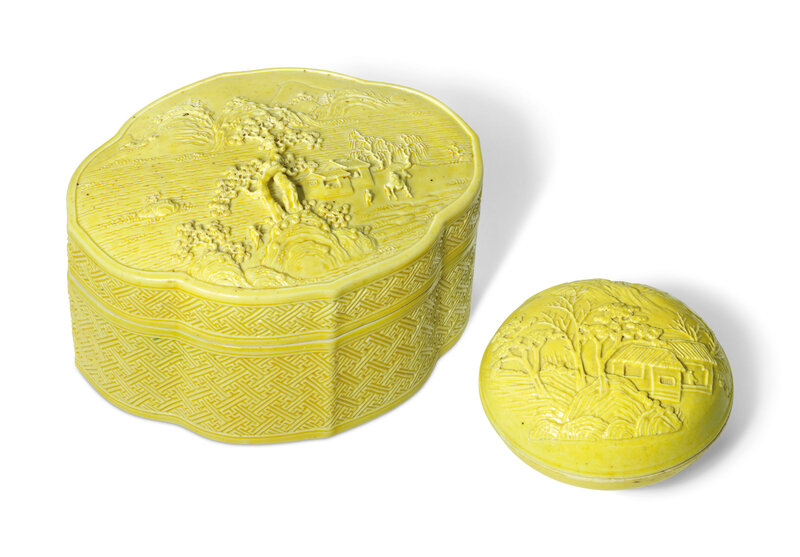 The first box is of quatrelobed form. The cover is skilfully decorated with scholars in a mountainous landscape and the sides with a geometric design. It is covered to the exterior and base with a pale yellow glaze, the interior is applied with a turquoise glaze. The base has an apocryphal Qianlong mark. The second circular box is decorated with scholars by a pavilion in a landscape. The base has a three-character mark reading Rong Sheng. It is covered with a pale yellow glaze to the exterior and a turquoise glaze to the interior.

Provenance: Private English Collection, formerly in a private collection in France, most of which was purchased in Paris during the 1960s and 1970s, and thence by descent to the present owner.

Note: These boxes are both decorated in the style of Wang Bingrong. Wang Bingrong was one of the finest of a small group of independent ceramicists of the mid-19th century who began to emerge from the traditionally anonymous production of ceramics at Jingdezhen by signing their names, developing distinctive styles and acquiring fame. His dates are not known, but Wang probably worked from sometime during the Daoguang period into the second half of the nineteenth century.

Christie's. Fine Chinese Ceramics and Works of Art, London, 14 May 2019