Christie's: Strong results achieved for Art of the Islamic and Indian Worlds, including Oriental Rugs and Carpets

Christie's: Strong results achieved for Art of the Islamic and Indian Worlds, including Oriental Rugs and Carpets 
LONDON.- The top lot was an important Safavid silk and metal-thread 'Polonaise' carpet from Isfahan, central Persia, first quarter 17th century, which fetched £3,895,000, setting a new world record price for a ‘Polonaise’ carpet at auction. Another highlight of the sale, the Monumental Mamluk Qur’an sold for £3,724,750, achieving a world record for a Qur’an at auction.

“The results of the Christie’s 'Islamic Treasures' London auction once again demonstrate the strength of the antique Oriental market at the high-collectible and museum-level niche.

“These two important rugs both sold for more than five times their highest estimates and both realized prices that place them within the Top 10 prices ever paid for antique Oriental rugs.

“Carpets in this category, the rarest of the rare, are seldom available and, when they arise, the interest among collectors is immediate and tremendously enthusiastic.

“The prices are an acknowledgement of strength and tremendously increased interest among art collectors for the high-collectible pieces.

"Frankly, there are virtually no important rugs from the First Golden Age (prior to the 17th century) available except in the auction setting. And the number of highly collectible Persian rugs from the Second Golden Age (ca. 1800 to ca. 1910) is rapidly being purchased and placed into private collections. In the last decade, we have been privileged to acquire and make available to our clients most of the major collections of art-level pieces from the Second Golden Age.”

Behnaz Atighi Moghaddam, Acting Head of Sale for Islamic Art and Louise Broadhurst, International Head of Oriental Rugs and Carpets, comment: At £16,031,375, this was the strongest result achieved in the last decade, with high prices throughout all categories. The full saleroom welcomed new buyers and witnessed competitive bidding with numerous telephone lines and online buyers from across the globe. We are particularly pleased with the record breaking Mamluk Qur’an, which realised £3,724,750. The carpet section of the sale was sold 77% by lot and far exceeded its pre-sale estimate, achieving a total sale price of nearly £9 million, the second highest sale result for this field at Christie’s. The Pommersfelden silk and metal-thread ‘Polonaise’ carpets achieved a combined total of £7,619,750, also setting an auction record price for a Polonaise carpet, and are amongst the top ten Persian carpets ever sold at auction. 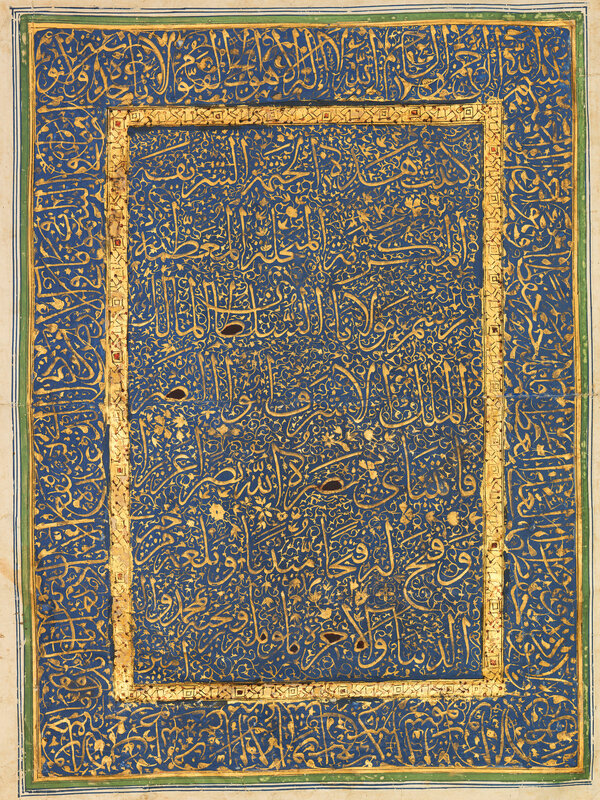 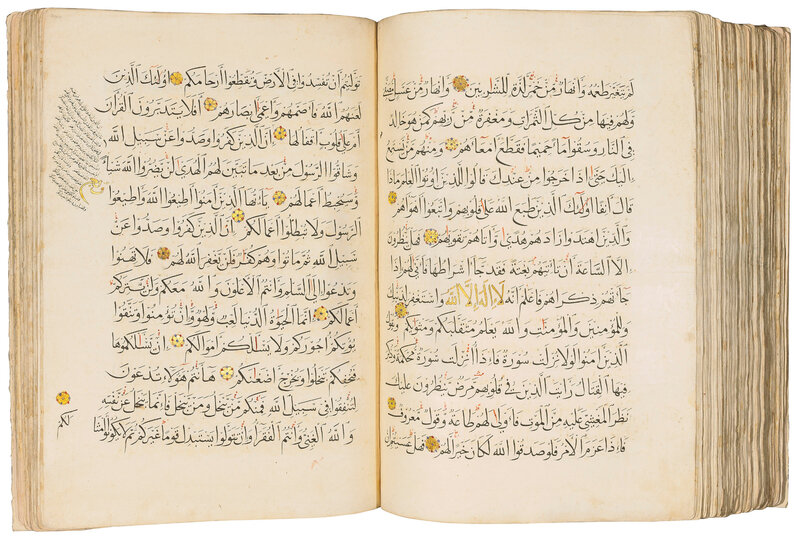 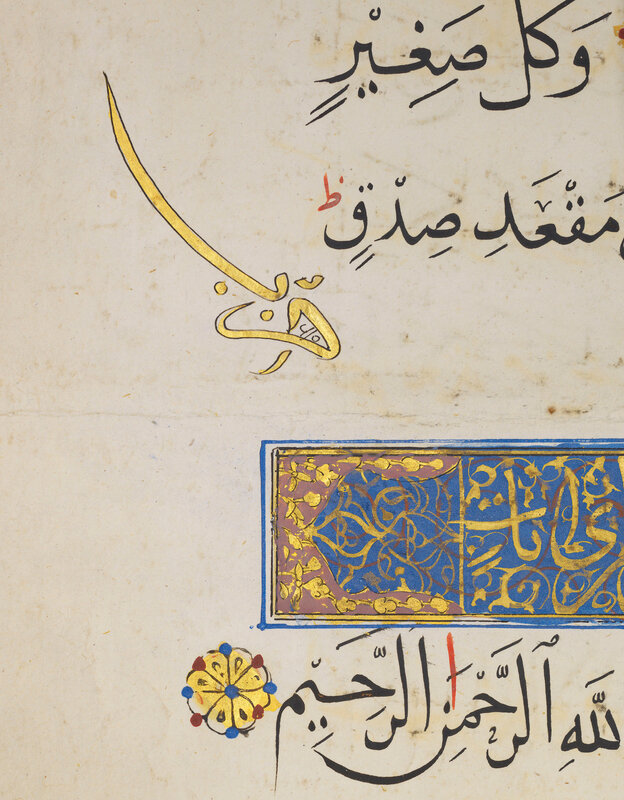 Note: The Mamluks were extraordinarily bountiful in their endowment of institutions of the period. The city of Cairo remains today a living monument to the generosity of endowments by the wealthiest nobles throughout this period. But the generosity was by no means limited to the capital. A recent study into the waqf donations to the northern Mamluk domains, the Bilad al-Sham, uses Ottoman documents to demonstrate “the remarkable number of endowments established by the Muslims in Damascus, Lebanon, Transjordan and Palestine during the Mamluk period (1250-1517)” (Frenkel, 2009, p.149). Just as the buildings were commissioned, so were the fixtures and fittings with which the new foundations were furnished.

Jonathan Bloom comments that “the arts of the book flourished in Egypt during the fourteenth century, although most of the effort seems to have gone into making fine, large manuscripts of the Koran for the Mamluk rulers’ pious and charitable foundations” (Bloom, 2001, p.81). In his study on Mamluk Qur’ans, David James culminates his argument with a discussion of the Qur’ans of Sultan Sha’ban 1363-76, “the greatest era of Mamluk Qur’an production” (James, 1988, p.178). He explains the development of the styles of illumination and calligraphy, and the influence that came into Mamluk Egypt from the Bilad al-Sham to the north, especially Baghdad. One feature that he notes but does not dwell on is the increase in scale of these volumes. The volumes of his Star Polygon Group of this period are generally on a massive scale, the length varying between 70.5 and 85cm, while the width is more consistent, between 50 and 56cm (James, 1988, nos.28-32, pp.230-232). This size equates to the half-Baghdadi size developed by the paper manufacturers in that city and adopted throughout the mediaeval Islamic World (Bloom, 2001, p.53). Shortly thereafter an even larger volume with full-Baghdadi size individual pages was produced for the Amir Sayf al-Din Sirghitmish ibn Abdallah al-Ashrafi with pages measuring 105 x 77cm (National Library, Cairo, 15; James, 1988, no.34, p.233). Massive Qur’ans continued as a speciality of the later Mamluk period, usually commissioned for donation to a specific institution; Qur’an stands (kursi) were developed on the same scale as fittings for the institutions to accommodate these magnificent volumes. Just as the generosity of the waqf foundations extended through the Mamluk realm, so massive Qur’ans were endowed with pages of a full-Baghdadi size. An example that survives in the Haram al-Sharif in Jerusalem, at 107 x 80cm., whose style indicates a 15th century date of manufacture, and which the author suggests was made during the reign of Sultan Barsbay in 836/1432-33, is almost identical in size to the Sirghitmish example noted above (Salameh, 2001, no.1, pp.94-97).

The reign of Sultan al-Malik al-Ashraf Sayf al-Din Qaytbay (1468-1496) witnessed the last period of Mamluk stability. Throughout his reign the sultan, a religiously conservative man, travelled extensively and was heavily involved in the construction of institutions in all regions. Michael Meinecke notes 230 foundations, in Aleppo, Damascus, Jerusalem, Gaza, Mecca, Madina, as well as in Alexandria, Rosetta, and numerous foundations in Cairo (Meinecke, 1992, vol.II, pp.396-442). While the present volume does not bear a specific waqf inscription, its scale makes it almost certain that it was commissioned for one of these new foundations.
The script is a large naskh, a rare script to find on a volume of this size where one would normally expect muhaqqaq to have been employed. The compact nature of naskh makes it ideal for volumes on a far smaller scale; yet on this scale it looks very comfortable and is wonderfully easy to read. This is a script perfect for reading from aloud in a congregational setting. A very similar naskh script had been used on a large Qur’an commissioned by Sultan Barsbay for his madrasa in the Anbarin district of Cairo (Atil, 1981, no.8, pp.44-45; another opening shown in Lings, 1976, pp.79-80). However the present Qur’an is one size up from the Barsbay Qur’an whose pages are 54 x 41.3cm.

Our scribe, Tanam al-Najmi, describes himself as al-Maliki al-Ashrafi, so was clearly part of the royal scriptorium. While he follows the general rules for the script, he allows himself quite a bit of freedom. Tails of letters can terminate at various angles, and he has a peculiar rounded fish-hook form of the letter re which he uses for the bismillahs but generally not elsewhere. He also has an occasional quirk with a terminal alif, of curving it right round over the preceding letters, which is most certainly not in the formal canon. The script has a flow, a strength, an individual character, and is not intended to have the perfect consistency of later Ottoman naskh. On the same page the same word can be differently written. It gives the impression of having been written relatively fast. In a few places one can see that he made a mistake; a few words have been excised with the scribe carefully cutting around the letters and scraping away the paper bearing the ink. He is helped in this by the thickness and strength of the Mamluk paper. Occasionally there is no attempt to cover up the space or, in another instance, it is covered by a massively extended ligature joining a he and qaf, within the same word.

If Tanam al-Najmi’s script was written fast, the illumination also gives the impression of having been prepared to a short deadline. Every individual page has each rosette fully illuminated, although a couple of red circles that Tanam had marked to be subsequently illuminated have been missed by the team of rosette painters (with slightly varying styles) that followed him. The sura headings, of which there are a number of different varieties of colouration, come in two basic types. The first has the script surrounded by fine leafy scrolls in a colour or gold that contrasts to the background. These show the influence of Baghdadi and Timurid illumination with its fine spiky floral motifs, but are worked much faster and less precisely. The other main type has a gold ground with scattered leaves or floral motifs with short stems left in reserve after the background colour has been added. Where rubbed, the background colour goes, leaving the gold panel exposed.

The opening dedication is a very large page-size illumination in the tight scrolling variety, the design, as well as the elegant thuluth painted in gold on the blue ground. Its similar border is one of the few places where the scrolling ground is overlaid by the inscription, giving a counterpoint to the composition. The opening bifolium of the Qur’anic text is the place, more than anywhere else in this volume, that demonstrates the tight deadline to which the Qur’an was produced. It is clearly unfinished, in that the filling in of the background on the left-hand page has not been completed and that on the right-hand side was not even started. These are in a classic Mamluk blue border of interlaced gold arabesques, but here again one suspects that originally there would have been small details added in other colours to bring the arabesques fully into focus.

We will never know for which foundation this magnificent volume was prepared. The scale on which is it conceived indicates that it must have been one of the most prestigious establishments of this eminent Sultan’s reign. It is a remarkable volume to appear on the market, an imperial Mamluk Qur’an on a magnificent scale, complete with the name and date of the scribe, and with a hugely impressive full page dedication to Sultan Qaytbay. It was clearly made to impress in the Mamluk period and continues to do so today. Commentaires sur Christie's: Strong results achieved for Art of the Islamic and Indian Worlds, including Oriental Rugs and Carpets