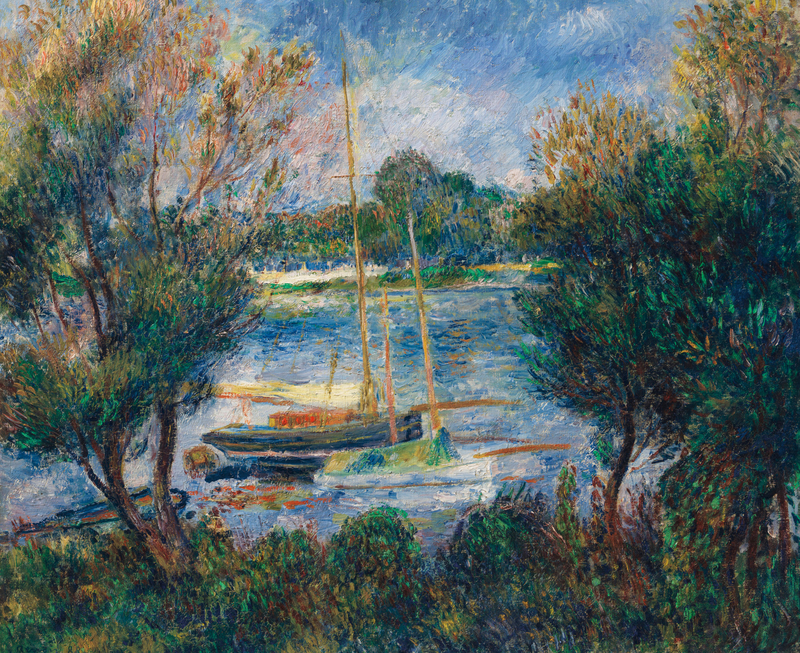 Note: This work will be included in the forthcoming Pierre-Auguste Renoir Digital Catalogue Raisonné, currently being prepared under the sponsorship of the Wildenstein Plattner Institute, Inc.

The late 1880s and early 1890s represent a watershed period in Renoir’s career. In the opening weeks of 1887, the artist put the finishing touches on Les grandes baigneuses (Philadelphia Museum of Art), a manifesto of the linear, Ingresque style that he had begun to develop three years earlier. He had high hopes for the monumental painting of five nymphs, which he had planned over some twenty preliminary studies. His goal, he told his friend and patron Paul Bérard, was to “beat Raphael” (quoted in B.E. White, Renoir: His Life, Art, and Letters, New York, 1984, p. 166). When the painting was exhibited in May at the Galerie Georges Petit, however, critical response was emphatically negative. Only Octave Mirbeau remained steadfast in his support: “The composition is exquisite,” he proclaimed, “despite or rather because of the precise drawing à la Ingres that the artist audaciously sought. Everything betrays accomplished research and the brilliant effort to create something new” (quoted in A. Distel, Renoir, New York, 2010, p. 249).
After brooding throughout the fall over his discouraging reception at Petit, Renoir rebounded with vigor in early 1888. “I’m very pleased with myself,” he wrote to Bérard in February. “I have some interesting things started and I’m determined to finish them” (quoted in B.E. White, op. cit., 1984, p. 178). He began to travel again widely, seeking inspiration in the richly colored art of Titian, Rubens, and the French Rococo, and he soon renounced the cool tones, dry surface, and hard-edged contours of Les grandes baigneuses. “I have taken up again, never to abandon it, my old style, soft and light of touch,” he explained to the dealer Durand-Ruel. “It’s nothing new, but rather a follow-up to the paintings of the eighteenth century. This is to give you some idea of my new and final manner of painting (like Fragonard, but not so good). Those fellows who give the impression of not painting nature knew more about it than we do” (quoted in J. House and M. Lucy, Renoir in the Barnes Foundation, New Haven, 2012, p. 121).
In 1888 two visits to artist friends were among the journeys Renoir made. First, at the beginning of the year, he travelled to Aix-en-Provence, where he painted alongside Paul Cézanne. While the two men shared little in terms of character—vivacious, sociable Renoir and irascible, solitary Cézanne—they had formed a strong bond across twenty years of common experience. Later in the year, over the course of the summer, Renoir and his family enjoyed two extended stays with Gustave Caillebotte in Petit Gennevilliers on the banks of the river Seine, across the river from Argenteuil on the western outskirts of Paris. The urbane Caillebotte, who had supported the Impressionist group during its most straitened times in the 1870s, owned a comfortable home in the small town, the perfect base from which to indulge his love of boating. Caillebotte, in fact, was to become one of the most influential sailors in France, a skilled boat designer, the financial backer of several important associations and publications dedicated to yachting, and co-president of the Cercle de la Voile sailing club in Paris, for which in 1892 he sponsored Paul Signac’s application for membership.
The present work, La Seine à Argenteuil, is one of a group of five celebrated oils of Argenteuil, all of which were painted in the summer of 1888 during Renoir’s stay with Caillebotte. Indeed, the dark-hulled boat in the present work can be identified as Mouquette, a yacht belonging to Renoir’s host. Each of the paintings in this series depicts various sailing and boating motifs. Reminiscent of Renoir’s 'high impressionist' phase of the mid 1870s, the rich and atmospheric colors of this composition are applied with vigorous brushstrokes, creating emphatic contrasts between warm and cool hues. The vibrant color scheme and patterns created by the fluid movements of the brush echo the manner of eighteenth-century French masters, such as Jean-Honoré Fragonard and Jean-Antoine Watteau, whose style was greatly admired by Renoir. Painted in the late summer, the present canvas possesses an air of rural tranquility disturbed only by the wind; the free brushstrokes used to apply various shades of blue, white, bright orange and green accentuate the ripples expanding across the surface of the water. The bold color contrasts are noticeable above all in the glimmering reflections of the orange-red features of the sailing boats in the bright blue waters of the river Seine. The treatment of reflections remains approximate, as in Renoir’s earlier works, creating an effect of luminous sunlight and gentle ebb and flow of the current. The pastoral effect of the scene is further highlighted by Renoir omitting any reference to the thriving industry which had established itself in the areas surrounding Argenteuil and Petit Gennevilliers, keeping with his distaste for modern machinery and industrial activity.
Landscape remained a central pursuit for Renoir throughout his career. Though known primarily for his figurative works, a result in part of his decision to present only works of this type to the annual Salon exhibitions, for Renoir the depiction of the landscape in its purest form offered him a means to experiment more freely with line, colour and form. As a result of this more liberated mode of expression, his works of this genre are often varied in terms of style and paint handling. "Landscape is useful for a figure painter," Renoir once explained. "In the open air, one feels encouraged to put on the canvas tones that one couldn’t imagine in the subdued light of the studio" (Renoir, quoted in J. House and M. Lucy, op. cit., New Haven & London, 2012, p. 217). Unlike Monet who sought to convey the topography of a particular location, rendering panoramic cloud-filled skies or the nuanced reflections on water, for example, Renoir was more interested in capturing the overall atmosphere of the natural scene in front of him.