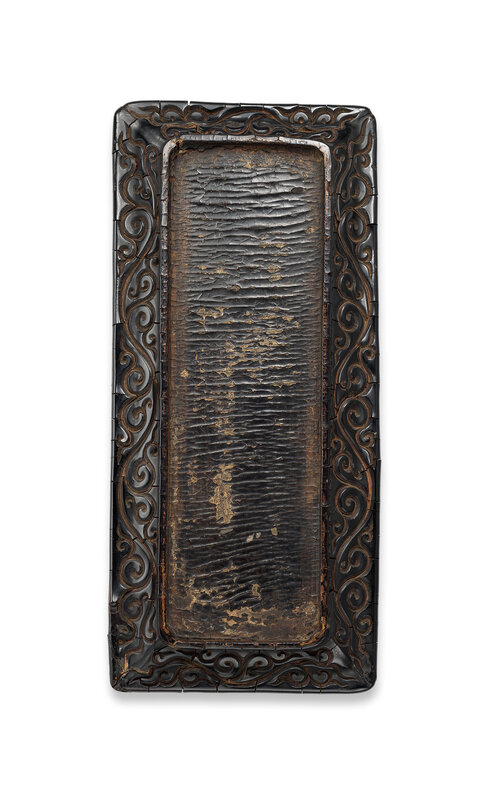 Note: The Japanese wood box accompanying the current lot has two labels which read “Hekiun Sanbou Chikuzo Buppin ”. It is said that “Hekiun Sanbou ”was named after the library of Mizoguchi Naoaki (1802 - 1858) , the tenth head of the Mizoguchi Family active in the Edo period.

The Mizoguchi family were daimyo feudal lords during the Edo period from early 17th to 19th century. They ruled the Shibata
domain, the northern part of which is the present day Niigata prefecture. Family members of the successive generations remained highly cultured and were devoted to the practice of tea ceremony. A keen practitioner, Mizoguchi Naoaki further developed the family’s collection of tea ceremony utensils and founded his own school for the practice of tea ceremony (Sekishuryu Echigo Ikei-ha).

The Mizoguchi Family were daimyo feudal lords during the Edo period from early 17th to 19th century. They ruled the Shibata domain the northern part of which is today's Niigata prefecture. Family members of successive generations remained highly cultured and were devoted to the practice of tea ceremony. It was Mizoguchi Naoaki who further developed of the collection of tea ceremony utensils as he was a keen practitioner and founded his own for tea ceremany school (Sekishuryu Echigo Ikei-ha).

There is another label reading “jou Yoshimura ” on the back of the box cover. According to Mr. Yoshiyuki Miyatake from the Doshisha University, this is the label of Yoshimura Kanna 1765 - 1848), a tea master renowned for his ability in authenticating works of art. Naoaki had a close relationship with Kanna and collected art pieces under his instructions. In fact, the character “jou ” suggests the
gesture of gifting to members from the upper echelon. Thus, it is highly likely that the current lacquer tray was gifted to the Mizoguchi Family by Kanna.

After the Meiji Restoration, the Mizoguchi Collection was dispersed through auction or private sales. Tea bowls and tea caddies from the Mizoguchi Family can be found in various important Japanese institutions such as Hatakeyama Memorial Museum, Senoku Hakukokan Museum and Nezu Museum.

It is also interesting to note that in 1906, a special exhibition was held at the Tokyo Imperial Museum showcasing artworks from the collection of Mizoguchi Naomasa (1855 -1919), the 12th head of the Mizoguchi family. The exhibition inventory list includes a ‘carved black lacquer tray with Chinese flowers’, which is very likely to be the current tray, see Meiji Sanjuku nen Tenrankai Reppin Mokuroku, Hei no bu, Tokyo Imperial Museum, 1906, no. 255, p27.

The current lacquer tray sets itself apart stylistically because of its central floral panel surrounded by further floral design. The form, design structure, and classic scroll on the present lot can be closely compared to a contemporary black lacquer scroll tray, decorated to the central panel however, with qiangjin birds and flowers illustrated in Regina Krahl and Brian Morgan, From Innovation to Conformity: Chinese Lacquer from the 13th to 16th centuries, London, 1989, pp. 20-21, cat. no. 1.

The large lotus heads closely surrounded by scrolling foliage can be compared to those on a Song-dynasty dish from the Lee Family collection, sold at Christie’s Hong Kong, 3 December 2008, lot 2108. Compare also a carved black-lacquer tray carved with flowers dated to the Southern Song dynasty (13th century) in the Tokyo National Museum, accession no. TH-469.