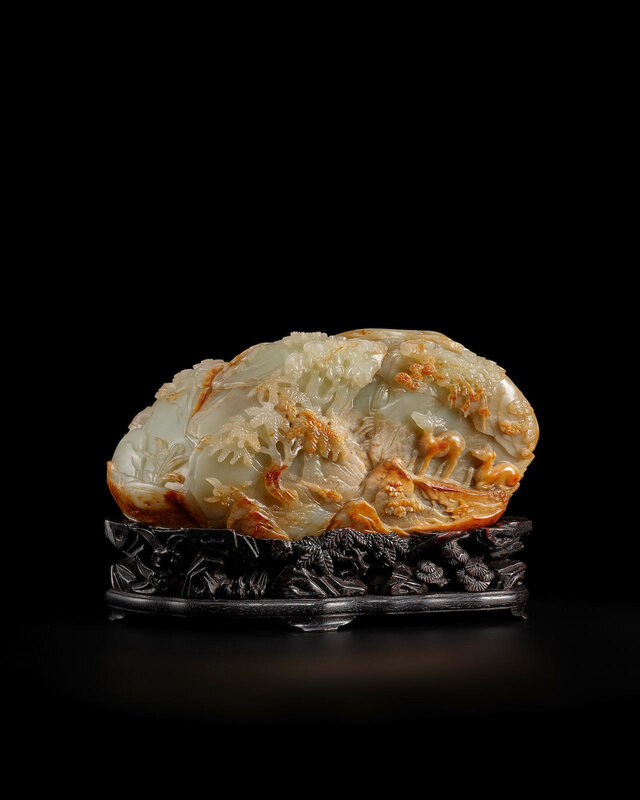 Superbly and meticulously carved in the form of a mountainous landscape in multiple layers of relief enclosing a standing deer and a recumbent doe on an inclined craggy rockwork surrounded by elaborate gnarled pine, wutong and willow trees, clusters of lingzhi and nandina sprays, and streaming waterfall, the reverse decorated with two cranes perching under pine trees in a similar setting beneath scrolling clouds, the stone of a pale green tone with the russet skin skilfully incorporated into the design of the boulder, wood stand and box.

Note: The present boulder is superbly carved utilsing the contrasting tones of the pale green jade stone and the russet skin. It is imbued with auspicious wishes. Deer and crane together symbolise Spring as well as long life. Moreover, this boulder is carved with pine trees, lingzhi fungus and nandina sprays, which all have auspicious meanings of long life and prosperity. The themes of crane and pine on jade carvings possibly originate from the Jin and Yuan period so-called 'Autumn mountain' jade carvings which depicted these animals from Autumn hunting excursions. Compare with an 'autumn mountain' jade ornament, Jin/ Yuan dynasty, in the collection of the National Palace Museum, Taipei, illustrated in Jingtiange wuyuan cang yu jinghua zhan, Taipei, 2012, pl.6.5.5. A similar spinach green jade boulder with similar carving of a pair of deer, Qianlong, was sold at Bonhams Hong Kong, 27 November 2018, lot 69. A related motif of cranes and deer on a pale green jade boulder, Qing dynasty, is illustrated in the Compendium of Collections in the Palace Museum: Jade, 6, Beijing, 2011, no.105.