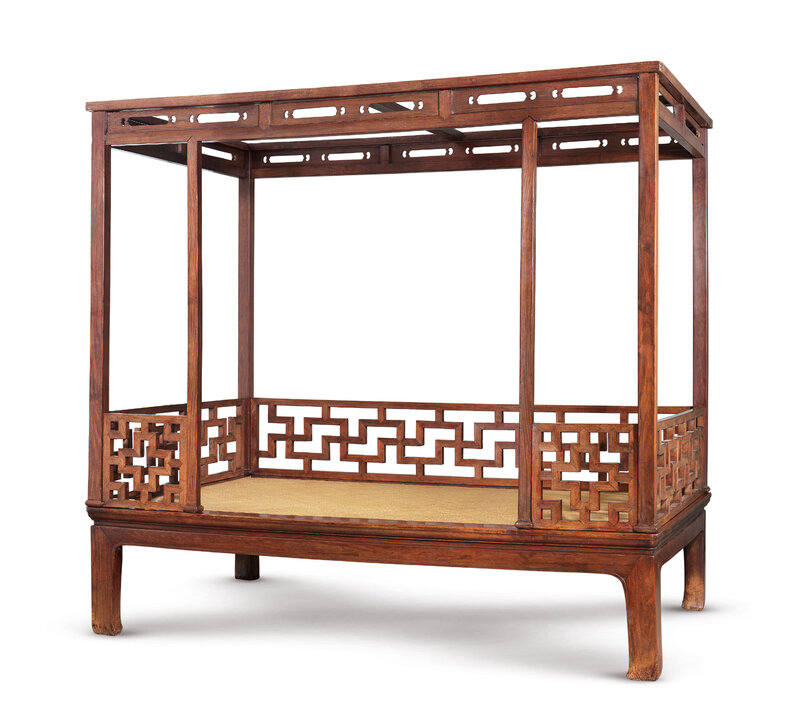 Note: Canopy beds have either six or four posts. As noted by Sarah Handler in her discussion of the form in Austere Luminosity of Chinese Classical Furniture, Hong Kong, 2001, pp.139-58, canopy beds occupied a central and dominant position in the Ming dynasty household. It was common for drapery to be used to create a private world within closed curtains, and examples can be seen in Ming and Qing woodblock prints (fig. 1).

A miniature model of an alcove bed made in jumu (southern elm) of almost the same design as the present bed was found in the tomb of a Wanli period (1573-1619) official Pan Yunzheng, discovered in Shanghai in 1960 (fig. 2). The excavated model is constructed with the original antechamber and stand, and is currently on display in the Shanghai Museum. The model demonstrates how the bed was originally displayed in a Ming dynasty bedroom together in a setting surrounded by other miniature furniture. See also the drawing of another miniature model of an alcove bed discovered in Suzhou from the tomb of Wang Xijue (1534-1614), the head of the Ministry of Personnel, also from the Wanli period (fig. 3). Both models suggest that the design of the present bed was popular among high ranking officials in the 16th century.

The geometric decoration on the railings resembles the wan character in Chinese. The wan emblem arranged repeatedly symbolises the wish for infinite longevity, wan shou wu jiang. A huanghuali bed of nearly the same size and ornamentation is in the Philadelphia Museum of Art, accession number 1961-89-1, and is illustrated by Michael Beurdeley in Chinese Furniture, New York, 1979, p. 83, no. 112 (fig. 4). Both the present bed and Philadelphia bed share the same carved panels beneath the top frame, similarly grooved posts, beaded aprons and thick, rectangular legs. The outer surfaces of the lustrous wood on the railings and posts are all slightly concave to create a beautiful play of light.

A similarly designed luohan bed was sold at Sotheby’s Hong Kong, 6 April 2016, lot 109. Also see another luohan bed from the Tseng Riddell collection, exhibited in Splendor of Style: Classical Furniture from the Ming and Qing Dynasties, National Museum of History, Taipei, 1999, pp. 108–109. A canopy bed with a related design of wan emblems on the surrounding panels is in the Palace Museum, Beijing, illustrated in The Complete Collection of Treasures of the Palace Museum - 53 -Furniture of the Ming and Qing Dynasties (I), Hong Kong, 2002, pp. 6-9, no. 2.