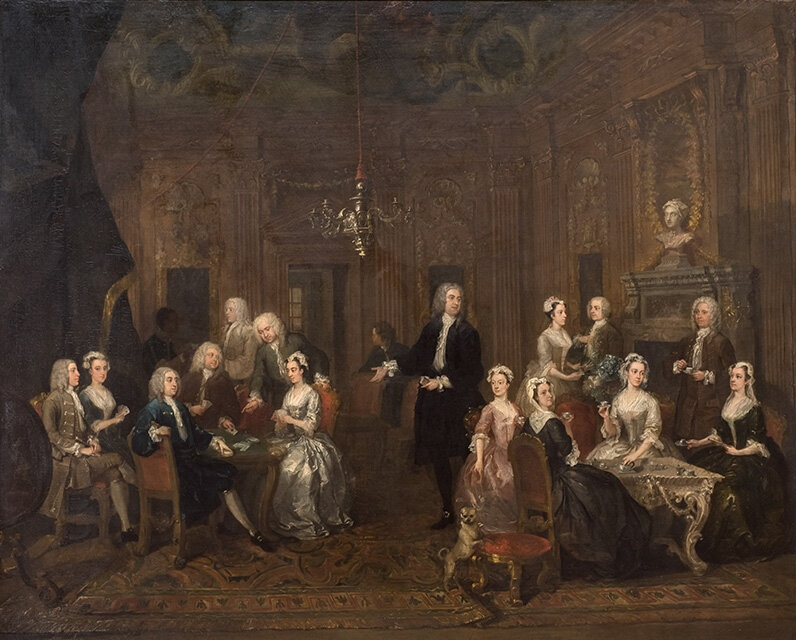 LEICESTER.- The painting William Wollaston and his Family in a Grand Interior by eminent 18th century English artist William Hogarth, has been allocated to New Walk Museum and Art Gallery, Leicester, via the Acceptance in Lieu scheme, following a campaign to save it for the nation.

Tax of £903,672 was settled by the acceptance of the painting. The value of the painting exceeded the liability on the estate and the City of Leicester Museums Trust launched the “Save the Hogarth Campaign”, which raised the £564,528 difference needed to secure the painting with generous grants from the National Heritage Memorial Fund (NHMF) and Art Fund, and contributions made by the public of Leicester.

William Wollaston and his Family by William Hogarth has been on loan to New Walk Museum and Art Gallery for 75 years; it has been enjoyed by generations of gallery visitors and now, due to the generous contributors to the fundraising campaign and the Acceptance in Lieu scheme, which is administered by the Arts Council, it will be enjoyed by many generations to come.

William Hogarth (1697 – 1764) is one of England’s most acclaimed artists. Born in London at the end of the seventeenth century, he is most well-known for moral series including A Rake’s Progress and Marriage A-la-Mode, and his prints such as Beer Street and Gin Lane. Hogarth was instrumental in bringing so-called ‘conversation pieces’ – informal group portraits which could depict a large amount of people, often families – to the forefront of British artistic circles in the eighteenth century.

In this conversation piece, Hogarth depicts the Wollaston family, whose head, William Wollaston, was MP for Ipswich from 1733-41. Hogarth was commissioned to paint the piece, which depicts either the family’s Charterhouse Square mansion, or their seat, Finborough Hall, Suffolk, after the death of Charlton Wollaston, the elder brother of William Wollaston and former head of the family. The extended period of mourning can be seen in the black clothing of some of the sitters, and cloths hung over wall decoration. Charlton’s bust sits on the mantelpiece.

The painting has been passed down through the Leicester Wollaston family, who have been residents of Leicestershire since 1652, in the family owned estate of Shenton Hall, which the family still reside in today.

William Wollaston and his Family is on display to the public in New Walk Museum & Art Gallery and will remain so until 6 September 2019 before being removed for conservation cleaning in preparation for a series of public events and an exhibition dedicated to the work and the artist in early 2020.

Joanna Jones, Head of Arts, Museums, Festivals & Events for Leicester City Council, said: “We are grateful to everyone involved, this is such an important addition to Leicester’s internationally recognised art collection.”

Jim Roberts, Chair of City of Leicester Museums Trust said: “We are delighted to announce that the fundraising campaign reached its target, with the generous support of the National Heritage Memorial Fund, Art Fund, and the Arts Council, who were instrumental in its success.

It was important to demonstrate the support of the people of Leicester through £30,000 of our own funds, donated by visitors to the museum alongside contributions from The Friends of Leicester & Leicestershire Museums, The Leicester Archaeological & Historical Society, and The Leicester Literary & Philosophical Society. We’re also grateful for the events run by the public – including a much attended ‘Pug Parade’ along Leicester’s New Walk – which were hugely important to raising money and awareness!”

Edward Harley OBE, Chair of Acceptance in Lieu Panel, said: “I would like to thank the Wollaston family for offering this wonderful picture to the nation through the Acceptance in Lieu scheme. I am delighted that it should be acquired for the New Walk Museum and Art Gallery in Leicester, where it has been on loan from the family since 1943. Hogarth is one of this country’s greatest artists and his conversation pieces such as this represent some of his most fascinating works. I hope that this example will encourage others to use the Acceptance in Lieu scheme, which continues to bolster museum and gallery holdings with cultural treasures.”

Peter Knott, Midlands Area Director for Arts Council England, said: “New Walk Museum and Art Gallery provides a great place for people to share stories and histories as a community and is an important part of Leicester’s arts and cultural offer. This is very special painting and we’re pleased that people in the city will be able to continue to see this world-class piece long into the future."