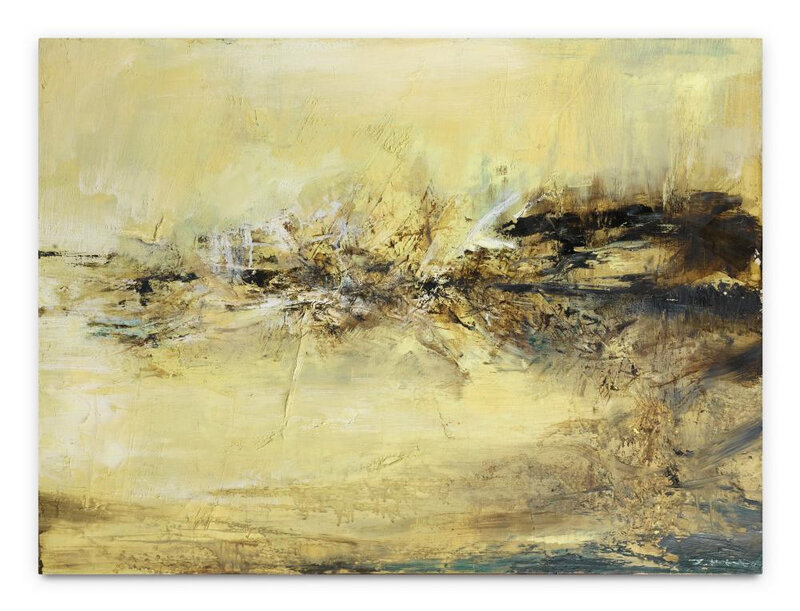 The authenticity of this work has been confirmed by the Fondation Zao Wou-Ki. The work will be included in the forthcoming Catalogue Raisonné currently being prepared by Françoise Marquet and Yann Hendgen. It is accompanied by a certificate of authenticity.

'Painting, again and again. The full and the empty, the light and the dense, the lively and the breeze, the best possible.' Zao Wou-Ki

Made in the last months of 1967, 3.12.1967 sheds brilliant light on Zao Wou-Ki's exceptional mastery of the most subtle color variations during the crucial years when he forged the esthetic vocabulary that turned him into one of the greatest artists of the modern and contemporary era. Drawing from pure eastern tradition as well as western abstraction, 3.12.1967relates to both ancient Chinese composition –that divides the canvas into two distinct spaces of expression symbolizing the sky and the earth, to then let the line set the intention at the center of the composition- and the core elements of western modernism, which gives the work its extraordinary power of expression. Perfect fusion of two pictorial visions too-long considered irreconcilable, 3.12.1967 represents a golden milestone in the artistic exploration of this master of the full and the empty, who invokes the spirit of nature to shape the mist, the freezing fogs and the winds. In other words: the unseizable. Zao Wou-Ki here sculpts the space in a unique way through powerful and vigorous strokes of brush and paintbrush. Giving life to a mental landscape, he also writes a true pictorial manifesto, the lines sometimes overlapping like a cursive script that would be intelligible only to those worthy to decipher it. At the very beginning of 1968, only a few weeks after finishing 3.12.1967, Zao Wou-Ki picked a fine man to be the owner of this powerful piece. Grand son of the founder of the fabulous Frick Collection and American tycoon widely recognized as one of, if not the biggest collector of his time, son of the paleontologist Childs Frick, Henry Clay Frick II does not only come from a lineage of great men, he is one himself. Chairman of the board of directors of the Frick Collection from 1965 to 2001, emeritus doctor teaching at the Columbia University College of Physicians and Surgeons, this spry fifty years-old travelling to Paris also distinguished himself for his exemplary conduct during the Vietnam war, for he voluntarily enrolled twice to serve in a countryside hospital. Passionate and spirited, Henry Clay Frick II and Zao Wou-Ki could only relate to each other when meeting during the winter of 1968, now over half a century ago. Half a century during which the canvas was preciously kept out of sight by the family, to now reappear in the city where it was imagined, conceived and revealed.